Difficult choices come everyday, but none was more difficult for Krissy Vaine and Ryan O’Reilly than when they asked for their release from their WWE contract earlier this week.

The choice automatically brought up questions. Bloggers and posters on message boards called the two “morons” and their decision “stupid.” Others began to speculate the reason behind them quitting what most in the industry would consider a dream job.

“There was a lot leading up to our decision,” Vaine told SLAM! Wrestling in an exclusive interview. “I’m just a small-town girl with small-town values. I had my priorities messed up in the past. Being away from home (in Greensboro, N.C.) so long and meeting Ryan (O’Reilly) really helped me realize what was important to me.”

Vaine and O’Reilly began dating in 2006. 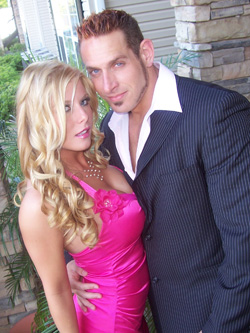 Krissy Vaine and Ryan O’Reilly look for a new life after the WWE.

Vaine noted some family health problems as being an awakening for her. “I could hear my mother’s heart breaking every time we spoke on the phone. I couldn’t bear the thought that something may happen to someone while I was away and couldn’t get home.”

The decision to ask for her release may have come before a two-week tour of Europe, which she was supposed to attend.

Sadly, Vaine and O’Reilly have a bond brought forth by tragedy. O’Reilly told SLAM! Wrestling about his niece and cousin recently dying. He began to evaluate his life. “Just recently my father had a stroke,” O’Reilly said, “and I began to really think about my family.

“A few men in my life told me that they are a strong believer that family comes first and that family values are very important.”

O’Reilly recalled a story about a good friend, whom he considers like family, who recently went through a tragedy. “I had a friend whose girlfriend was in a really bad accident, and as I sat in the hospital trying to cheer him up, I began to think to myself what things could happen you are away from home. I thought what would happen if something happened to Kristin (Krissy Vaine) or someone in my family.”

Although the decision came together, they each had to ultimately make the choice on their own. “It was a big decision,” O’Reilly said. “I want to give people reading this an insight on such a big decision in my and our lives.”

Vaine knew she wanted to be a wrestler while in high school. She followed her dream a few years after graduating when she started attending a wrestling school near Greensboro, N.C. She made her debut in 2003, and less than three years later, she was signed by the WWE to a developmental deal. She started in Deep South Wrestling out of Atlanta, and recently had relocated to Florida Championship Wrestling in Tampa, Fla. Just two weeks ago, she made her debut on the Smackdown show, as an unnamed person who had an issue with Torrie Wilson.

O’Reilly had been under a developmental contract for almost two and a half years, making his home in Deep South and later Florida Championship Wrestling.

Nicknamed “Roughhouse,” O’Reilly would capture the Deep South Heavyweight title in June 2006 and again in March 2007. O’Reilly often worked house shows and dark matches for the WWE around the country. He and partner Derrick Neikirk wrestled the FBI team of Little Guido and Tony Mamaluke throughout 2006. Recently, O’Reilly had worked numerous dark matches before RAW and Smackdown tapings. Some of his matches appeared online on WWE.com’s Heat internet show.

Before his release, he was expected to join the ECW brand.

The two were chastised on message boards for their decision. Vaine was showed a comment calling their departure “very stupid.”

“They don’t know what has happened in our lives that lead to us make this decision,” Vaine replied. “If we are happy then that’s all that matters.”

O’Reilly agreed. “It sucks to hear people think badly of you for something you truly believe in. I left on good terms with my boss and all that ever mattered to me is what my boss or agent thought. Everyone has an opinion, and they are entitled to say what they want.”

What is next in their plans? “I believe we can do anything we set our mind to. I think we can conquer the world,” Vaine said.

O’Reilly worked for TNA in its earlier days, and Vaine likes the possibility of working there in the future.

“I hope there would be some interest,” Vaine said. “A lot of my friends work there.’

“Wrestling needs diversity, things that are different.” O’Reilly said about TNA. “I enjoyed the work I did with them.”

When asked if they had any regrets, Vaine said, “No, I don’t think there will be any.”