Lucha Libre legend Karloff Lagarde passed away Friday morning at the age of 79. He was a major star in the 50s-70s, often teaming with Rene Guajardo. He faced every major star of the era including El Santo and Blue Demon. He also co-starred in some El Santo movies, mostly working without credit. He also starred in some movies on his own, most notably, La Mano que aprieta, where he played Satan. 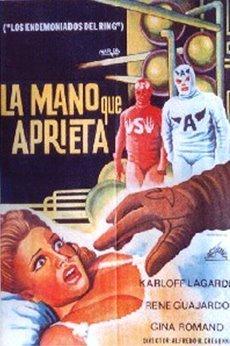 He held the NWA World Welterweight Championship on three occasions, defeating Blue Demon, Huracan Ramirez and Vento Castella to win the title. The title would gain modern day fame in 1996, when it part of the J-Crown title in Japan.

He’d win his first NWA World Welterweight Championship on July 31, 1958, defeating Blue Demon in Mexico City. He’d hold the title for over seven years before he was defeated on August 5, 1965 to Huracan Ramirez. He’d recapture the title on September 24 of the same year. He lost the title again on May 7, 1967 to Vento Castella, his old tag partner. He’d regain the title on July 3. His last reign ended on July 11, 1971 when he lost to Alberto Muñoz in Mexico City. He has one last chance at the title, but lost a tournament final for the vacant title to Mano Negra in 1973.

He never wrestled under a mask, and thus was forced to put his hair up on a number occasions. He lost an infamous hair match with Ray Mendoza in 1965. He would also go on to lose hair matches to Solitaire, Jerry London and Perro Aguayo. He also took the hair of Cavernario Galindo and El Impostor during his career.

His son would wrestle for CMLL in the later part of the century, using the name Karloff Lagard Jr. His brother also wrestled as The Black Angel.

Lagarde had been suffering from health problems in recent years, most notably suffering a stroke a few weeks back.