OTTAWA – Attending the recent When Legends Collide wrestling event in Ottawa was similar to seeing your favorite classic rock band, the members may have grown older and grey but can still deliver the hits.

The card was largely filled with 1980s-era WWF stars like Koko B. Ware, Kamala, Lanny Poffo and Greg Valentine. There were just enough new superstars like A.J. Styles and Christian Cage to make the evening interesting for younger fans.

The opening match was a relatively quiet affair with Calgary-based Karachi Vice defeating the team of Dave Titan and Ravenous Randy. Local flavour was added by Ottawa female wrestler She Nay Nay acting as referee. 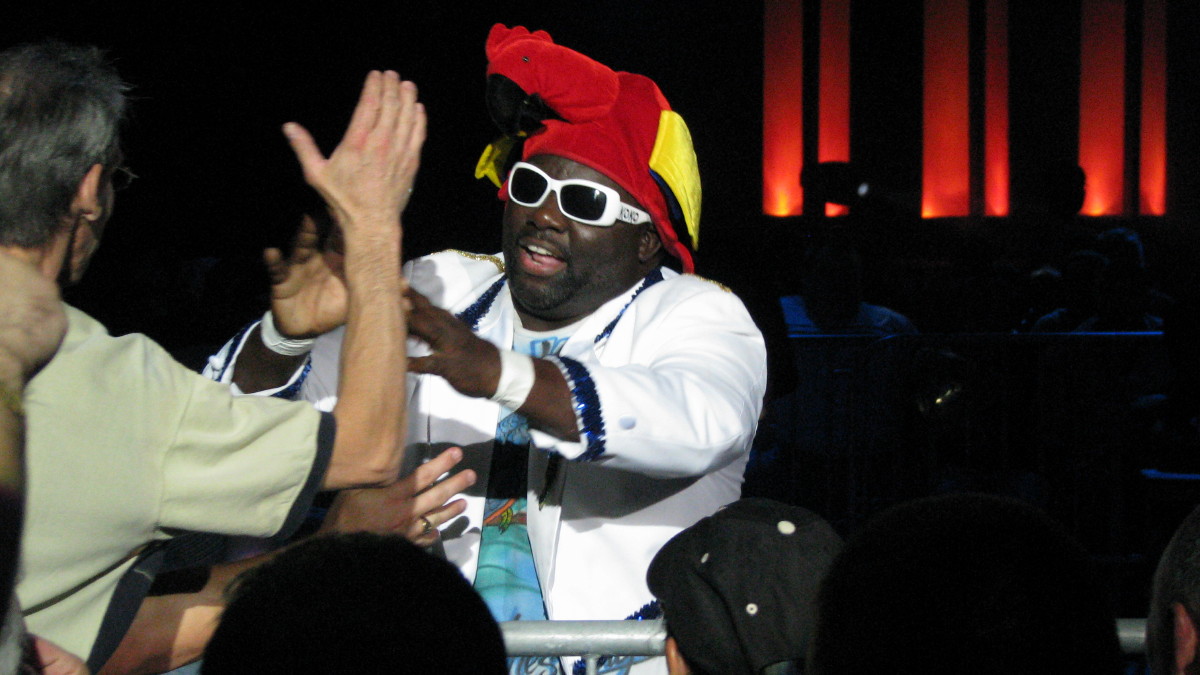 Koko B. Ware heads to the ring in Ottawa. Photo by Sandra Garrido Arciniega

Fans nostalgic for the WWF days were rewarded with a match between Kamala and Lanny Poffo. Poffo drew some cheap heat by reciting a poem knocking the Ottawa Senators. Kamala’s entrance was comical as he was accompanied by four Canadian Forces soldiers. The expressions on the soldiers faces indicated they did not understand the history of Kamala or why they were helping him to the ring.

The ring entrance lasted almost longer than the match. Poffo managed one flip but Kamala quickly ended things with a splash.

The next match featured Koko B. Ware and Greg “The Hammer” Valentine. An angle was played up where Valentine had recently beat up Ottawa weather anchor and former Much Music VJ Bill Welychka. Welychka was making his return as the referee and for good measure would be protected by sports anchor and former Ottawa Roughrider Ken Evraire.

Koko drew one of the largest fan reactions of the night when he invited a young child from the crowd to join him for the bird dance. According to script, he also vowed to defend the good name of Ottawa against Valentine thus firmly establishing himself as the fan favourite.

The first few minutes of the match were filled with arm bars as the aging veterans seemed to ease into the match. The match picked up some steam but ended quite quickly as Welychka did an extremely fast count thus exacting revenge on Valentine.

Perhaps the best match of the night was between “Hotshot” Johnny Devine and Psycho Sid Vicious. Vicious is still an extremely imposing and well-muscled figure. He also attracted great fan reaction. Instantly, there was ring chemistry between the two. Devine executed a number of risky high-flying moves and Vicious countered with spectacular displays of power. The match ended with Vicious delivering his patented Powerbomb

The fans’ emotions quickly turned from excitement to disappointment as it was announced during intermission that Bret Hart would not be attending the event as advertised due to flight delays. Chants of “refund” could be heard throughout the building. It was difficult to hear the ring announcer as boos drowned out his voice.

The next match featured the evening’s promoter Devon “Hannibal” Nicholson against Abdullah the Butcher. It seemed as if Nicholson attempted to lose as much blood as possible to make up for the non-appearance of Hart. The match started in typical Abdullah fashion with the fork making its appearance within the first few minutes. Abdullah carved Nicholson with the fork and also delivered a blow with a coffee pot. The shot did not go according to plan as Nicholson bore the full brunt as the pot shattered. He was bleeding profusely but to his credit the match continued. After a few minutes, it became obvious that Nicholson was truly injured as the bleeding did not stop. Abdullah and Nicholson fought their way backstage and the match was declared a draw as neither returned to the ring.

After the event, Nicholson spoke to SLAM! Wrestling: “I had to be taken to the hospital because the paramedics thought I lost about 2.5 litres of blood during the match and the bleeding was not stopping. I needed five internal stitches and about twenty external stitches from being hit with the coffee pot and stabbed with the fork.”

The final match featured a triple threat match between Pierre Carl Ouellet, Christian Cage and AJ Styles. The original card with Jeff Jarrett against Christian Cage had to be modified as it was announced that Jarrett could not wrestle due to health issues. Cage proved he is one of the best speakers in the business with a long rant about how Toronto was better than Ottawa. Styles also pushed certain buttons by asserting the United States was better than Canada. In a rather ironic twist, Ouellet played up the fact he would defend Ottawa even though he is from Montreal and frequently enters the ring carrying the Quebec flag.

Although the match was a last-second adjustment, Ouellet, Cage and Styles put on an excellent show. Cage and Styles predictably double-teamed Ouellet for most of the match. Ouellet finally triumphed when Jeff Jarrett delivered a chair shot and Pierre Carl covered for the victory.

When Legends Collide did have a few obvious glitches like the non-appearance of Bret Hart and Jeff Jarrett not wrestling. However, the show did provide an entertaining mix of legends and new talent. The event also drew over 3,500 fans which is equal to or slightly better than recent WWE (non-TV) house shows in Ottawa.

Fans also seemed to appreciate seeing a mix of older and new stars. “It felt like I was attending a high school reunion,” said fan Paul Murza. “It was interesting to see WWF stars who I grew up with in the 1980s still perform today. I was disappointed Hart did not make it but was generally impressed by the evening.”

Event promoter, Devon Nicholson, felt pleased with the show on a number of different levels. “It was nice to wrestle at the Ottawa Civic Centre after watching so many WWE shows there growing up and it was nice to have a good crowd so the arena did not feel empty. I’ve wanted to wrestle there all my life.”

While Nicholson may have fulfilled a childhood dream, he also delivered a card that entertained Ottawa wrestling fans starved for an alternative to the WWE.

Stephen Dean Johnson somehow managed to avoid getting forked by Abdullah while backstage at the show. He did, however, get serenaded by a poem or two by Lanny Poffo.