DDP sounds off on his many projects

Diamond Dallas Page has always seen himself as a bit of a trendsetter, but unlike some of those other egos in the dressing room, he has some supporting evidence to back up his claims.

He was the first wrestler to have his own website when the Internet was just becoming well-known and used. (It was called DDPbang.com and by his own admission, was nothing spectacular.) He was one of only old guys to break into modern wrestling, having his first pro match when he a ripe 35 years of age. Some even say he was instrumental to the “Attitude” era, as in WCW he was a bad guy that ended up being good. And this was before he won his first heavyweight championship title not long after his 43rd birthday. 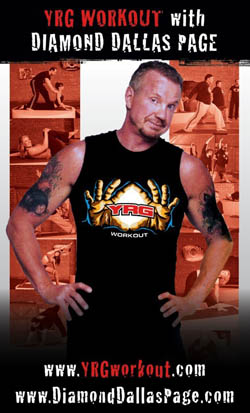 DDP doesn’t wrestle any more, but it should come as no surprise that he would continue his trendsetting ways into his retirement. Sensing that webcam technology just might be the next big thing, DDP logged into Stickam.com, a website that allows users to interact with each other via webcam all over the world, created an account, and began hosting his very own Internet show.

“I was just playing around,” Page said during a telephone interview with SLAM! Wrestling. “When I held my first show, I didn’t actually expect anyone to show up.” But show up they did — his first show had well over 100 participating in the interactive live chat, which was an excellent showing for an Internet show that had barely been advertised. “Live is still everything,” he said, his statement once again supported by existing evidence.

But DDP doesn’t just want to talk about wrestling when he’s on the Internet, although that is a big component of his show. He’s more interested in spreading the word about the latest trend he is trying to set: a simplistic fitness program he calls the YRG Workout (short, apparently, for Yoga for Guys/Girls).

“YRG is going go worldwide,” Page said, “so much so that in three years people won’t even remember that I wrestled. Lives are being changed by the YRG workout and that’s because literally anyone can do this — if you’re 11 or 81, you can do this workout.”

It’s a little reminiscent of the “Positively Page” gimmick DDP got saddled with when he joined the WWE, doesn’t it? The difference is, at least in Page’s eyes, that gimmick was doomed to fail. “They wanted to create something that was already created,” he said of the direction WWE went with his wrestling character. “And obviously, it didn’t work.”

YRG, on the other hand, has already had some success, the former WCW Heavyweight Champion pointed out. The YRGWorkouts.com webpage contains several testimonials from people who have tried the program, men like “Arthur,” who is using the program to try and walk again. Even wrestlers currently active are using the program, although DDP was hesitant to reveal their names. “No one wants to admit they are using someone else’s program,” he said. (Although he did drop the names Samoa Joe and Christian Cage as men who had adopted the YRG workout into their regimen.)

How DDP came to be involved in the YRG Workout, a program he describes as a regimen “where power yoga meets old-school calisthenics,” is just as interesting as the man himself. Power Yoga was the farthest thing from his mind a few years into his pro wrestling career but that would change when he ruptured his L4 and L5 at the age of 42.

“The doctors said my wrestling career was over, but I wasn’t ready to walk away,” DDP recalled. “I had just gotten there!” His significant other at the time, Kimberley, suggested he start doing some yoga to help him, but he scoffed at that notion. “I said I wasn’t going to do that crap, only sissies do yoga!” But the doctor’s prognosis didn’t improve, and the aging wrestler realised he had nothing to lose by giving the “sissy” exercise a try.

So he did some yoga and slowly began tinkering and personalizing with its elements until he had a unique workout that he could call his own. The result was the YRG workout, a program that has had some documented success. Seeing the effects his workout had, he decided he needed to take his product to the next level — worldwide promotion.

“YRG is something I will do until I die,” Page said. That’s why he started his show on Stickam.com, a show that debuted April 24th, and has continued since. On his profile on Stickam.com, he advertised his next live show this way:

“This is going to be a casual informative online video chat about YRG. During the live broadcast I will be taking questions about YRG and help you with advice so that you to can achieve your goals. Ask your questions about the YRG modifications, the heart monitor, weight loss, core strengthening, flexibility, how to hold back the hands of time, how to eat and live a healthier lifestyle.”

So, as is his way, he used that to his advantage. “How do you tell people to set goals and challenge themselves and then not live it?” he asked. “I said I was going to be the top guy in the world of pro wrestling at the age of 35 and everyone looked at me like I was smoking crack. Then, a few years later, according to Pro Wrestling Illustrated, I was one of the top four guys in the world.”

In the interview with SLAM! Wrestling, he was a little more personal. “I am just trying to show people what’s possible,” he said. “As a kid, I couldn’t read and had ADD (attention deficit disorder). At age 30, I was reading at the level of a Grade 3 student. I decided I wanted to learn to read at 31 and by age 32 I had read my first book. Ten years later, I was writing my own book. So I am constantly challenging myself to show people what’s possible.” 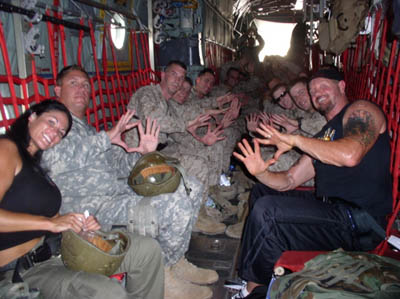 Apparently part of that mission required a trip to the war-torn region of Iraq. The way he saw it, the troops there were putting their lives on the line and he wanted to show his support. So he flew there — twice.

“A lot of the soldiers in the Armed Forces are big wrestling fans,” DDP explained. “Many of them grew up watching me in their living rooms for 12 years; I was like part of the furniture. They never thought in a million years they would ever meet me. And when they saw me, the first thing they did was give me the Diamond Cutter sign, the Bang, the whole deal. They thanked me for coming there and told me how much it meant to them and how much it boosted their morale. It was a very powerful trip and that’s why I went back again.”

But wherever DDP is — Iraq, on Stickam.com, doing a media interview — the conversation inevitably ends up being about wrestling. He doesn’t watch much of the wrestling on television these days, although he said he did catch Wrestlemania 23. “There were some good matches there,” he said but also pointed when he was actively wrestling, it was a bit of a different time.

“Wrestling wasn’t about high spots then,” he commented, “it was all about that believable moment of doubt.” He recalled his match at Wrestlemania 18 against Christian (Cage), which ranks as one of his favourites. He also points to his match against Goldberg in 1998. “I challenge anyone to find a more battle-driven and believable match than that match I had with Goldberg where fans were on the edge of their seats the whole time.”

Christian and many of the other Canadian wrestlers have earned his respect. “When I think of Canadian wrestlers, I think of character,” he said. “They are just so respectful. I loved working with Benoit; we had some incredible matches. And it was a huge honour to work with Bret Hart. I really like the Canadian work ethic — they never go at half or quarter speed.”

On his live Internet show, people invariably ask DDP if — and when — he will make a return to the ring himself. “I am negotiating with another company,” he told SLAM! Wrestling, saying a return would all depend on how he was brought back. “But right now it’s more important for me to stick my foot over my head and talk to you then it is to stick it up someone’s ass.”

A return then, would seem, is not imminent. But that doesn’t mean he doesn’t still have something to offer the wrestling business, above and beyond his new workout program. “Our bodies take a serious beating in this profession,” he said, continuing, “so anything — like YRG — that can help the guys hold back the hand of time is a good thing.” (As opposed to being a bad thing.)

And, judging a bit by what he’s seen, DDP feels the kids breaking into the business today could use the help. He’s watched some of the kids on the independent circuit take crazy bumps to try and get noticed, a decision he calls a recipe for disaster. “Some of these rookies are ignorant and aren’t going to listen,” he said, perhaps also referring to his own lessons learned both in and outside the world of wrestling.

Teaching those lessons might be his final legacy to the sport. If people can tune into his live show and learn about becoming healthy and listen to him talk about wrestling, then perhaps he can set another of his unique trends.