And so we begin. With today’s arrival of Johnny Nitro in Windsor, Ontario, on a VIA Rail train, so too does SLAM! Wrestling’s epic coverage of WrestleMania 23 begin.

To start with, photographer Mike Mastrandrea was on hand this morning for Nitro’s play to the crowd at the Windsor train station. About 250 people were out to see the now-partnerless MNM member. (Did you miss Joey Mercury’s release?)

“Everywhere I go I try to bring a little bit of L.A., a little bit of sexy,” Mercury said after his Chatham to Windsor trip. “I walked off the train today and I was just feeling it. I was feeling very sexy. Sometimes I look at myself and I say, ‘Oh, yeah, Johnny Nitro!'” 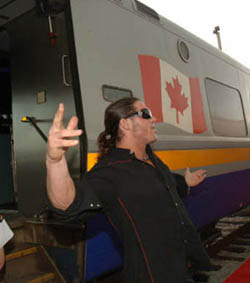 Also on hand were Windsor mayor Eddie Francis and WWE Canada President Carl DeMarco. It was announced that some Windsor hotels still have tickets available to WrestleMania 23 on Sunday.

After the announcements, Nitro stuck around to sign autographs, even while it started to rain.

Now, how about a little of what’s in store for the rest of the week here at SLAM! Wrestling.

The Big One is Saturday, with Tim Baines’ interview with Vince McMahon for Sun Media. It’s Q&A; style, and Mr. McMahon does not duck the steroid issue. If you live in Ottawa, Toronto, Winnipeg, Calgary or Edmonton, be sure to pick up a copy of the Saturday Sun. The rest of you will be able to read it here on SLAM! Wrestling. (A tease, you ask? Quoth Mr. McMahon: “You can’t remain on top for as long as we have if you’re not pushing the boundaries.”

Now, on to Detroit.

Mike Mastrandrea will be on hand all week, shooting the various events, signings, the THQ video game competition, the Ring of Honor show Friday night, the WWE Hall of Fame Saturday night and, of course, the big show itself. Everything (except the ROH gallery) will make its way into our WrestleMania 23 gallery.

As for the writing end of things, let’s just say that we’re happy that the good folks at the WWE for deciding on putting WrestleMania 23 in a city where SLAM! Wrestling is well represented.

Here’s a list of who will be at the WrestleMania itself from our staff:

Also in Detroit will be Jason Clevett (of Calgary). He’ll be covering the “Supercard of Honor II” Ring of Honor shows Friday with Bruno Sammartino as a special guest and Saturday — including the in-depth interviews for which he’s become well known in the passionate ROH community. Clevett also hopes to get back across the border for the Legends of Wrestling event in Windsor with stars from the past like Tito Santana, Demolition (Bill Eadie & Barry Darsow), Jimmy Snuka and Rhino.

Last, but not least, is Ryan Nation, who recently moved from Tennessee to Sterling Heights just outside Detroit. He will hit the occasional signing and event around town.

The devastating tag team of Raw reporter Dale Plummer and columnist Nick Tylwalk will offer up the pay-per-view report itself, and the whole staff will be weighing in with our picks for who will win and lose.

Now, can any other site offer you all this? Stick with SLAM! Wrestling all week.