While considered by many to be a modern day daredevil both in and out of the ring, the inaugural Elevation X match with Rhino at this Sunday’s Destination X pay-per-view has “The Phenomenal” A.J. Styles feeling a bit apprehensive.

On Tuesday, in a TNA/Spike TV conference call with the media, Styles expressed enthusiasm about the innovative match — and concern.

“It’s very unstable,” explained Styles about the Elevation X structure. “You’re very limited up there, but we’re going to do what we can to make this the most exciting and scariest match not just for us, but for the fans as well because you never know what’s going to happen. You never know when an accident may happen — I guess that’s the scariest part.”

The Elevation X structure is a modified version of a scaffold match. The ‘X’ itself is comprised of two giant steel girders, each of which is two feet wide, that crisscross the six sided ring, some twenty feet up in the air, thus forming a giant ‘X.’ These girders are supported by a series of four other girders that are lowered to the ground from the roof of the iMPACT! Zone, according to TNAWrestling.com. 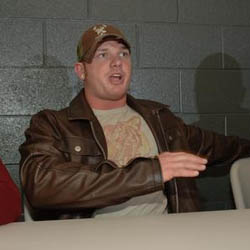 The former three-time NWA World Heavyweight Champion shared his initial reaction to the proposal of this unique match concept.

“I was very excited about a scaffold match of any kind because there are not many of them,” recalled Styles. “The last time I really heard of a good one that was actually a scaffold match where you had to fall into the ring was back when the Road Warriors were doing it. Then I actually saw the structure, and I was frightened because it’s so high. It’s scary, there’s about 20 inches of width to the X.”

The six-time X Division champion compared the dangers of Elevation X with other risk matches such as his previous Ultimate X and Lockdown bouts.

“There’s definitely some potential to do some crazy stuff, but there’s a lot of potential to get seriously injured,” said Styles. “I think the Elevation X is the highest in the air I’ve ever been. I think that’s what is so frightening about it.

“This is definitely as far as it needs to get for a while with the Elevation X,” continued Styles. “Everything else is reasonable pretty safe, but this one is on the edge. It’s close to being something that’s not supposed to be in wrestling.”

Phenomenal: The Best of AJ Styles, Volume 2 is scheduled to go on sale April 3. Styles explained his involvement and input regarding the creative process.

“I actually had some ideas about how I would like the second DVD to go. I had a couple of matches that I knew I wanted, and they put them on there. I guess whatever I wanted; they would do if they could. I had a lot more [input] that some people do with their DVD.”

Although not slated for release until early 2008, Styles also has great expectations for TNA’s first wrestling video game TNA iMPACT!, which he helped to develop with Midway Sports.

“It’s going to be something easy for someone who doesn’t know anything about wrestling to actually play the game,” explained Styles. “It’s going to be fun. If you want to do Petey [Williams]’ Canadian Destroyer, it’s going to be in there. It’s a lot of work to get to where we want to be, but it’s definitely going to be a great game. I can’t wait to go into an EB Games or Game Stop and see the TNA video game.”

The Gainesville, Georgia native has been with Nashville-based wrestling company since the company’s inception in 2002. The triple-crown winner reflected on the changes he has seen in the organization over the past five years.

“One of our biggest changes is definitely the six-sided ring. That’s something that separates us from anyone else. [Secondly,] people want to come wrestle for TNA when at the beginning, they didn’t even think it would last. These are top-notch guys that want to come over, wrestle and have a good time.”

During the conference call, Styles admitted another hour of programming would greatly benefit the X Division roster.

“It’s hard to get everybody on TV within an hour. The veterans may help people, who do not know what TNA is, to watch. It’s all about getting as many viewers as possible. If that’s what veterans do, then that’s what we need to get out there to make sure people are watching. At the same time, when we do get another hour — if and when that happens — it will be the X Division stars that get to shine too because they’re great wrestlers.”

When Styles is not changing tights on the road, he is changing diapers at home. His wife, Wendy, recently gave birth to their second son, Avery, who was on born on Valentine’s Day.

“At the beginning it was very hard because I was gone so much, and I just wanted to be home,” commented Styles on balancing fatherhood with life on the road. “The older he [Ajay] got, the easier it was to leave him a little bit because I know everything is going to be all right. Now the second one [Avery] is here; it’s even harder not only just for me, but for my wife especially because now she has two babies she has to watch.”

With so much going on in his professional and personal life, Styles shows no signs of slowing down — only speeding up.

“I set goals for myself,” remarked Styles. “Every time I meet one goal, I have to make new ones. I want to make TNA the number one wrestling business out there. To pay off my house is another goal of mine. I also want to be a great father.”