Jason Cage back in ring after near-death experience

Pro wrestling has never shied away from using death as a gimmick, with The Undertaker and his manager Paul Bearer the most famous example. But for Ontario grappler, Jason Maschke a.k.a. “The Daytona Beach Badboy” Jason Cage, it was not a gimmick. Wrestling nearly cost him his life.

Maschke has a resume that is similar to many independent wrestlers. He grew up being a diehard wrestling fan in Napanee, Ontario, and dreamed of turning pro. His lucky break occurred in 2003 while attending a show in Kingston, Ontario. “I introduced myself to the promoter of the Kingston show and indicated I was interested in getting into wrestling. I already had the bleached hair and tan so many fans already thought I was a wrestler,” Maschke told SLAM! Wrestling. 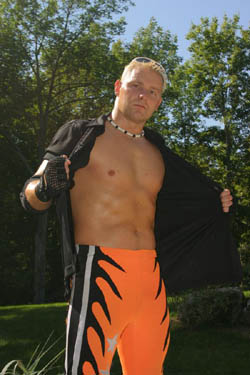 He went to nearby Peterborough and started training with “Tyrant” Bill Dawson. A few months later, he made his debut with the Universal Wrestling Alliance promotion, based out of Ottawa.

The 31-year-old Maschke feels he has accomplished a lot in his three years of being a pro wrestler. “I had four main goals when I started wrestling. I wanted to wrestle a big name from the past and someone from the present. I had the chance to wrestle the Honkytonk Man and Abyss from TNA so those two goals were accomplished,” the 5-foot-10, 208-pound blond explained. “I also wanted to wrestle for the WWE and hold a championship belt.”

Maschke’s quest to wrestle for the WWE would be what almost killed him. “The WWE were holding open tryouts in Ottawa and I decided to give it a shot. I submitted my resume and they posted the name Jason as one of the successful applicants. I drove to Ottawa figuring I had nothing to lose and got accepted for the tryout. The first step was to cut a promo. A few of the wrestlers looked like a deer caught in headlights,” Maschke said. “I was the last guy to do the promo and felt like I really nailed it. I even had Booker T laughing.”

The next phase of the tryouts would not be so pleasant for Maschke. “We were told to do a hundred Hindu squats and then run the stairs of the arena. If one guy missed a squat or a stair, the entire group had to start over again. I started to feel a pain in my legs and after a few more squats my legs gave out. I eventually had to stand aside as I couldn’t do any more squats.”

Maschke wasn’t ready to give up even though he was in considerable pain. “I thought it was just extreme lactic acid build up in my legs. We were asked to do some in-ring work and I was paired up with a guy who was 6-foot-6. I am well known for my leapfrogs and dropkicks but I was not able to do any of my normal moves. My legs just weren’t working for me.”

A few days later, Maschke found himself in a Kingston hospital. “After the tryouts, I found I wasn’t able to bend my legs. The breaking point occurred when I started urinating blood. A doctor friend of my wife’s recommended that I go to the hospital immediately,” Maschke said. “The doctors diagnosed me with rhabdomyolysis, which meant that I had overexerted my body to the point I was breaking down my own muscles. A side effect is that the exertion releases proteins into the body, possibly leading to kidney failure.”

The options for Maschke did not seem to be very positive. “There was a real fear that I was going to lose my legs. The doctor wanted to do 12-inch cuts on my quadriceps to relieve pressure. Interns from Queens University were brought in as they had never observed this condition. I felt like I was part of a medical study.”

Maschke did feel strengthened by the support he received from friends, family and the community. “I received a lot of cards and had many visitors. I also made the cover of the local newspaper. I was overwhelmed by the response people had for my situation.” 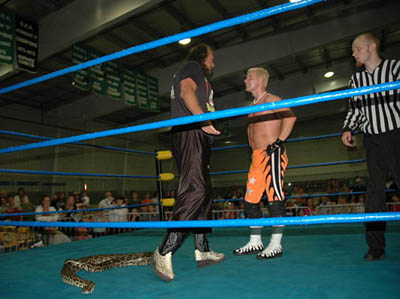 Jake “The Snake” Roberts faces off with Jason Cage.

Fortunately for Maschke, his condition improved and was released from the hospital. His next step was to begin rehab for his legs. “I had to take a month off work and basically had to learn how to walk again. When I first got back to my job as a police officer, I was stuck behind a desk. It took awhile until I was able to assume my normal duties.”

Maschke not only pursued rehab for a return to normal life, but also a possible return to the wrestling ring. “I felt like I had accomplished three of my goals but still wanted to have a shot of wearing a championship belt. My family supported me and I made an appearance at an Universal Wrestling Alliance show in January. The fans were incredible and really got behind me. I went from being a heel to a good guy. One fan even made a Jason Cage action figure!”

“We are happy to see Jason back with the UWA,” said UWA promoter Dave Dalton. “I know he went through hell with the injury so it is great to see him back in the ring again.”

Since making his return to the ring, Maschke has wrestled in three matches but admits to not being a hundred percent. “I am still a bit tentative and nervous when I feel a twinge in my legs. I’ve incorporated Hindu squats into my workouts and am working on strengthening my legs. I feel lucky with what I have been able to accomplish with wrestling and am not ready to give up yet.”