Before signing with the WWE in 2005, CM Punk was earning accolades on the indy wrestling circuit for his gritty, no nonsense style and marathon mat matches. Unfortunately Full Impact Pro’s new DVD, declarations: The Best of CM Punk Vol. 1, falls short of showcasing his many talents.

A long-time mainstay and former world champion in the FIP-affiliated Ring of Honor promotion, Punk (Phil Brooks) has been considered one of the top properties in the relaunched WWE version of ECW. 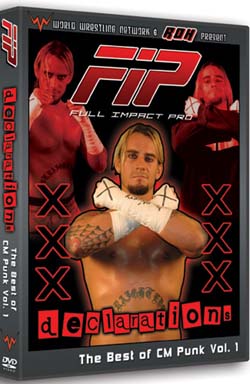 This DVD — obviously released to capitalize on Punk’s recent success in WWE — has its flaws.

The problem lies in the misinterpretation of “best of.” When you use these words in the title of a compilation whether it be in the CD or DVD format, one assumes you are just going to use the very best material, not a bunch of filler. And this DVD had more filler than a generic hot dog.

The DVD contains 11 selections in all. Seven are actual Punk matches. There is one match where Punk doesn’t wrestle (this is an approximately three-minute bout between Homicide and Masters w/Punk). The remaining three selections are brief highlight clips featuring Punk.

These clips feature the final moments of a bout between AJ Styles and Homicide just because Punk interferes in the match’s outcome, a match between Azrieal w/Punk vs Rainman where surprise, surprise Punk once again interferes in the match’s final outcome and a clip of Punk’s eight-second stint from the Florida Rumble where he was quickly eliminated by James Gibson. In other words, they are completely unnecessary. Once again let’s reiterate: the DVD is called “the best of CM Punk” not “a collection of every piece of video footage containing CM Punk.”The reason anyone would watch this DVD is if they are Punk fan and they want to see his best matches from his indy days. Sadly the seven actual matches don’t live up to this standard either. Make sure you make use of the match selection option on your television screen if you view this because there are only two matches that are noteworthy and they are near the end of the DVD.

The first is Punk vs Homicide from Emergence Night 2 on September 25, 2004. Both having made it to the Finals of the FIP Heavyweight Title Tournament, the two show the fans that they are willing to put it all on the line for the title… even if it meant Punk getting his face shoved in a urinal or taking a hip toss and a vertical suplex on a grass field as the two took it outside the ring, through the concession stand and finally outdoors. Homicide also endured his share of pain getting an atomic drop right on the very top of a folded steel chair. Ouch.

The second truly “best” Punk match was also against Homicide. Homicide, the FIP Heavyweight Champion, defends his reign in a No Disqualification, Falls Count Anywhere Match.

I must confess after I watched the first Punk vs Homicide match, I immediately went to this one. Again the boys make their way outside, deciding not to waste time wrestling in the ring. Both proceed to the parking lot and climb on top of a Ryder moving truck. (How convenient.) They climb down after trading punches, attempting some pinfalls and probably realizing it’s not the best idea to be up there.

The arena just happens to be next to a strip club. So of course the boys make their way in there and fight on the stage. Punk even swings around on one of the poles for leverage to take a kick at Homicide. (I hope he washed his hands later.) All the while patrons and two scantily clad ladies look on. Homicide and Punk even take a brief excursion into the VIP area, fortunately it is empty, and then wind up back near the poles, where the ladies have resumed “their duties.”

Punk yells out “you’re a whore!” to the ladies, which results in much laughter and with a quick edit of the video the two are outside in the parking lot again. Homicide delivers a pile driver on the cement and retains his title.

Major props to the film crew for these two matches. For being an independent promotion, they captured every angle, every sound and it looked extremely professional (everything, but the strippers, of course). This is top notch filming.

The entire DVD should have consisted entirely of matches of the Homicide vs Punk caliber: that’s the Punk we want to see. It’s definitely something to consider for the next volume and other FIP productions.