A great part of being a wrestling fan is getting together with others and sharing “Remember when…” stories about your favourite matches and moments. TNA Wrestling’s newest DVD release, TNA Wrestling: The 50 Greatest Moments, is the company’s way of joining in on the fun.

As the title implies, the DVD allows fans to relive 50 of the highlights from the promotion’s four-and-a-half year run, from its first PPV in May 2002 up through approximately the summer of 2006 (ie: Sting’s title win in October is not included, nor is Kurt Angle’s debut). Included are all of the company’s major milestones, special appearances, significant debuts, and craziest spots, including some things that were only aired one time and have never before been available on DVD. 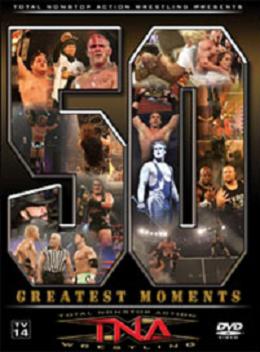 The DVD follows a pretty straight-forward formula. Each moment is introduced by voiceover, which provides some context around the circumstances, the event name and year, and the participants involved. Then, highlight clips of the moment in question are shown, interspersed with personal reflections from the concerned parties about what transpired.

Those comments are generally made out of character (Jim Mitchell is the only one who seems to maintain his on-screen persona during these segments; Raven, too, but to a lesser extent), and to have the talent talk about the significance of these moments in their eyes makes this a lot more than just a simple highlight reel.

As for the 50 moments themselves, they really are a decent cross-section of what the company is all about. I won’t spoil the DVD for you and list them all, but I will point out some of my favourites that were included:

I also enjoyed watching the highlights from the early days, when the show was a weekly pay-per-view event. Relatively new fans of TNA will appreciate seeing clips from those events, including the special appearances by mainstream stars like Toby Keith and Chris Rock. And seeing some of the giant names who have appeared in TNA over the years, like Harley Race, the Road Warriors, Randy Savage, Jushin ‘Thunder’ Liger, Jimmy Snuka, Ken Shamrock, and Ricky Steamboat.

Of course, there will always be those who will want to debate the ranking of certain items — no criteria is provided as to how they were ordered. And fans will no doubt have their own favourite moments that weren’t included. Where was the company’s first house show from Detroit for example? Or the time Lollipop had her infamous wardrobe malfunction (Greatest. Night. Ever.)?

But, to me, those types of debates are all part of the fun of watching a collection like TNA Wrestling: The 50 Greatest Moments. And fans of TNA, new and old, will certainly have their chance to do that with this DVD.