Hogan DVD a mix of the rare and the repeated

I’m not sure if I was ever a Hulkamaniac.

Sure, as a kid I enjoyed watching the Hulkster in action. I’d stay up late on weekends just to tune into Saturday Night’s Main Event (because, afterall, Hulk never wrestled on WWF Superstars of Wrestling) to see him fight. I cringed when Earthquake crushed Hogan’s ribcage on the Brother Love show. Heck, I even collected his O-Pee-Chee trading cards and kept them separate from the others, even before the days of top loaders and plastic sheets.

At the same time, however, I never begged my parents for a “Hulk Rules” T-shirt, nor did I write a letter to Hulk while he was “recuperating” from his injuries or go to a WWF house show just to see him.

Heck, up until Hulk Hogan: The Ultimate Anthology arrived in my mailbox, I did not have any sort of media solely devoted to the man behind Hulkamania. 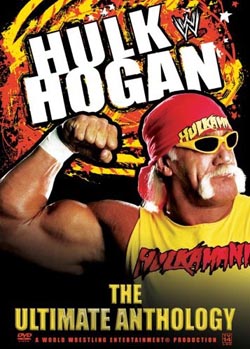 After watching the DVD, I can’t say the kid in me screamed out “Hogan! Hogan!” The adult in me, jaded by all the stories of backroom politics, certainly did not do that.

What did excite me about the three-disc set, however, was the inclusion of a number of hard-to-find matches. While Hogan’s WrestleMania VI match against The Ultimate Warrior is easily found on at least two other compilations (The Warrior’s bio-DVD and the WWE Championship history recording are the ones that come to mind), there are a number here that cannot, and likely will not be found on another WWE recording.

Paramount in my eyes is Hogan’s match against Curt Hennig from the XWF (Extreme Wrestling Federation). For those who don’t remember the short-lived wrestling organization, think of it as NWA-TNA version 1.0. Run by Jimmy Hart, the XWF had what seemed like a solid plan with a stable of wrestlers old and new. Hogan, being a close friend of Hart’s, showed up to be part of the company, though not as much as an active wrestler as he explains in a pre-bout description. Hopefully WWE will unearth more of these matches on future compilations.

The second bout I blissed to was Hulk Hogan vs. Andre the Giant. No, not the WM III bout (which, naturally, is on this disc); instead, the match included was from 1980 on an airing of WWF programming. Of course, this was well before the PPV era, so you can excuse the McMahons for giving the match away on free TV. The bout is hardly a Steamboat-Savage classic, but is noteworthy for a moment where Hogan slams Andre. Yes, WM III was not the first time the Hulkster pressed the Eighth Wonder of the World, and I’ve got to give WWE props for having the grapefruits to show that Andre had been slammed before, by Hogan even.

The third match that I ran to will, obviously, not be as much of a rarity to others as it was to me, that being the Hogan vs. Ric Flair match that occurred shortly after the Hulkster jumped to WCW. Why was this a must-see you ask? Well, for two reasons. First, WWE, for all of the things it did right with the Nature Boy in his first major run with the Fed, did not properly do a match between the two arguably biggest names in the modern era. Yeah, there were the house show bouts, but there certainly was not a PPV match, nor, if I’m not mistaken, was there any sort of televised confrontation between the two. Second, this was still during a time when WCW was a relatively unknown entity in Canada, as it was still two years before Nitro would come on the air on local channels (though TBS was available in certain cable packages). I can’t even remember if we got the PPVs or not. In any case, the match wasn’t all that great (as one might expect), but was a good retro moment.

The rest of the matches, save for Hogan’s AWA Heavyweight Title bout against Nick Bockwinkel, I had seen at one point or another. This was partly due to my penchant for renting WrestlManias weekend after weekend and partly due to the fact that Hogan, in one way or another, has been on virtually every WWE DVD that has been released in the last couple years.

Of course, I’m a bit surprised at some of the non-inclusions. As you might expect, the one that I missed the most was any of the matches that Hogan had with Earthquake. For an angle that lasted pretty close to a year, it’s surprising that there were no matches between the two. I was also expecting, despite the horribleness of the bouts, to see a Hogan vs. Zeus match. The last thing I wanted, which I don’t believe has been included on any WWE bio-DVD, is a Survivor Series match. Yes those bouts are pretty long, but Hogan has been a part of some pretty memorable ones, so hopefully we’ll see a couple on what will inevitably be a third Hogan DVD sometime in the future.

Overall though, I was satisfied with what was included on Hulk Hogan: The Ultimate Anthology and can safely recommend it, even if, like myself, you’re not a Hulkamaniac.