The AWA may have been forgotten for 15 years, but the WWE brings back the memories in the new DVD set Spectacular History of the AWA.

The two-hour documentary (plus four hours of extras) looks at the history of the American Wrestling Association from its start in 1957 through its closing in 1991. Details are strong at points, and although many parts are overlooked, the documentary does well overall.

Do not judge a book by the cover. Many questioned the cover art of the DVD with the likes of Sgt. Slaughter, Ric Flair and Jerry Lawler pictured (plus the lack of Verne Gagne and Nick Bockwinkel). The people who were most influential with the AWA are featured in the documentary. In fact, Flair is never mentioned by name in the documentary (only shown wrestling during SuperClash in 1985).

The documentary starts with the story of Verne Gagne. Gagne was one of the biggest names in wrestling when it was first televised in the 1950s. Gagne and other argued that he was only behind Lou Thesz in terms of popularity during that time.

Arguments over Gagne wanting to be the NWA World Champion led to him co-founding the AWA in 1957. The documentary skips over most of the first 15 years of the promotion, barely mentioning Billy Robinson, Mad Dog Vachon and Bockwinkel, who were Gagne’s main opponents. While The Crusher and Ray Stevens are only briefly mentioned, others like Dick Beyer, Pat O’Connor and Dr. Bill Miller were not as lucky. 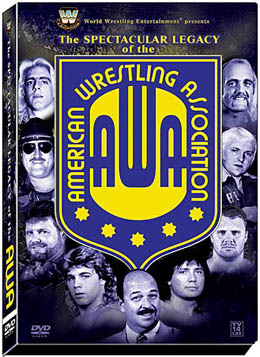 The documentary gives very little details up through 1983. When the topic of Hulk Hogan comes up, the documentary begins to become much more detailed. At this point, the discussion of WWE’s invasion of talent comes up. Greg Gagne explains how this was very devastating to the promotion. Verne, on the other hand, is more subdued. “I don’t know what young Vince had in mind,” Verne said in the documentary.

The topic of getting television on ESPN is quickly talked about. WWE’s invasion, Verne turned to a lot of older wrestlers like Von Raschke, The Crusher, Dick the Bruiser and himself to try to carry the promotion. Younger faces took over when the show started on ESPN in 1985. Marty Jannetty, Shawn Michaels, Scott Hall, Curt Hennig, the Road Warriors, the Destruction Crew and others helped compete with the WWE during this time.

Although the documentary does not mention them, people like Yokozuna, Vader, Scott Norton and Diamond Dallas Page got their first big break with the AWA.

Following the WWE invasion, AWA tried some very scary moves to compete. The first move was the creation of Pro Wrestling U.S.A., a promotion that was to showcase not only the AWA but also the NWA and other territories. After only a few shows (including Super Clash), the idea ended. Greg Gagne shares a story of David Crockett trying to sign AWA talent to work for his Mid-Atlantic territory while the two are supposed to be partners in competing with the WWE.

A second ill-conceived idea was Super Clash III, the first and only AWA PPV. The PPV was built around talent from the AWA, World Class Championship Wrestling, CWF out of Memphis and others. The show was a financial flop, and it is suspected through comments of Jerry Lawler that no wrestler was paid.

An interesting side note not mentioned in the documentary is a story told by ring announcer Gary Michael Cappetta in his book Bodyslams: Memoirs of a Wrestling Pitchman.

Kerry Von Erich took on Jerry Lawler in the main event that was to unify the AWA World title and the World Class titles. Von Erich was messing around with a razor blade in the lockerroom before the match. Von Erich cut his arm with the blade and went to the ring bleeding from the bicep. The match is one of the bonuses on the DVD set, and you can see Von Erich looking at his arm during the ring introductions. Moments into the match, Lawler slams Von Erich’s arm into the turnbuckle to try to explain the bleeding arm.

The documentary explains Jerry Lawler being stripped of the title following the PPV. Lawler claims he was never paid for the PPV and still possesses the AWA World title (and is shown holding the belt in recently shot footage).

The end of the promotion is detailed well including the ill-conceived Team Challenge Series, Verne losing his property and neverending talent departures. Verne did everything in the book to keep it alive, but there was really nothing left to present.

The WWE and the documentary really gives props to Verne for what he brought to wrestling history. His training, promotion and his in-ring talent are among the best ever. Mistakes are pointed out, but explanations are often given for those mistakes. An example being when Verne gave his son-in-law, Larry Zbyszko, the World title because he knew he would not leave (loyalty is presented as what Verne most respected).

The documentary ends with Verne’s introduction into the WWE Hall of Fame. Vince McMahon and others explain why a non-WWE wrestler was introduced. It is simple: his impact is felt in the WWE’s past and present.

The extras on the DVD set include some bonus interviews and stories left out of the documentary. These are definitely worth a watch for some extra insight and laughs. Most of the bonus matches were never released before including many house show matches.

Spectacular History of the AWA is a must for any old-time fan. Don’t remember the AWA? This is a must for you as well. AWA’s rich history should be knowledge every wrestling fan should possess.