Even though Lance Storm likes to occasionally “be serious for a minute”, there are some things he finds to be just plain fun. That list includes running his wrestling school, writing one of his regular website columns, and talking about his upcoming appearance in Mississauga where he’ll take on Christian Cage.

On December 2nd, the day before he makes his appearance at Blood Sweat and Ears’ X-Treme Xmas show for the match against Cage, Storm will be holding a wrestling clinic at the Squared Circle Wrestling school in Toronto. This event, he told SLAM! Wrestling, will be a unique learning opportunity for any young wrestler looking to make their name in the sport. 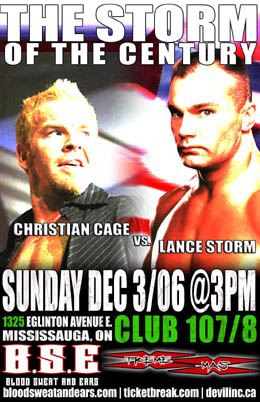 “I’ve had guys attend my seminars here in Calgary who have been working for five-plus years, and they have said they learned more in a day than they had their whole career. (The clinic will give them) a chance to pick my brain and learn from my 16 years of experience in the business. If someone feels they need improvement or feel they need to progress to the next level, this is their chance.”

“The main focus will be on ring psychology,” he added. “I find a lot of indy workers today haven’t had the opportunity to work much more experienced workers and a lot of the structure and meaning behind matches is getting lost. There are a lot of ways to maximize crowd reactions without simply taking more and bigger bumps.”

“Wrestling,” he elaborated, “is a fine art. Unless you’ve had the chance to work a lot of places with a lot of great workers, and perform at a high level, you are likely painting with a fairly broad brush. This is a chance to paint with a finer brush and add important details.”

Those are the same lessons he imparts his students with at the Storm Wrestling Academy in Calgary. Storm is quite proud of the success of the school thus far, and he seems to have settled well into the role of teacher.

“It’s doing extremely well,” he said proudly. “My classes have been booking up full in advance. In fact, May of 2007 is my next available opening.”

The demand is high, undoubtedly because of Storm’s own wrestling pedigree. In his view, it is his direct involvement that sets the school apart from others that use an established star’s name, but bring in other people to run classes.

“I am completely hands on,” he said, reinforcing this key selling point. “(As a result) there isn’t too much expansion that I can do, because I can (only run so) many classes myself, and I don’t want to hire other instructors.”

That sort of do-it-yourself spirit is also prevalent in Storm’s website, www.stormwrestling.com. Though he could hire a webmaster to run his homepage, Storm prefers to be very heavily involved. He updates his site regularly, answering questions from fans, and providing his commentary on events going on in the business, including recaps and views of WWE, TNA and ECW programming. In addition, he also promotes his BookMarks program which encourages his fans to read a book and discuss it in an online forum. He has had a lot of fun with this component of the site, even having authors join the community discussion about their own books.

Storm’s writings are seen as an insightful view into the business today, and no doubt were a primary reason why he was recently signed to The Fight Network as an online journalist. He credits his success in this venture to one thing:

“For the most part,” he explained, “it’s because I enjoy it. I love this business and enjoy discussing it with others who love it also.”

As much as he loves writing about it, though, there’s nothing better than getting in the ring and doing it. And Storm is very much looking forward to his opportunity to do just that against Christian. It’s rare for Storm to take a booking now that he’s retired from full-time action. And with an upcoming surgery scheduled on his knee shortly after this event, it’s possible that this may be his last match ever. If that’s the case, BSE fans in attendance could be watching history unfold before their eyes.

“I don’t like the term ‘Dream Match’, but it should be a great match to see. (To wrestle on an independent show) doesn’t feel as big time as matches on the bigger stage, but at this stage of my career it gives me creative freedom, which more than makes up for that. It’s the chance to see both Christian and I work together without any company restrictions. This will be the two of us at our best doing things exactly the way we want to do them. This is about doing what I love and having fun. Seriously.”