Heading into TNA’s primetime slot on Spike TV and its Genesis pay-per-view, there is perhaps no one more surprised that Sting is the NWA World champion than the man himself.

Two years ago, he told SLAM! Wrestling that he wasn’t actively looking for a return to professional wrestling, but that he was open if the right storyline came along. 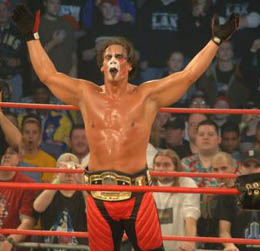 “I had no plans of going back into wrestling, although I think I mentioned at the time that I hadn’t completely closed the door and said, ‘I’m done.’ But I thought that I was,” Sting (Steve Borden) told SLAM! Wrestling last week. “I didn’t think that, really, that anything would develop because I wasn’t out there pursuing it.”

Then TNA called, explaining that the company was growing and he was needed in-house on a consistent basis. “As we were talking, it was, ‘We’ve landed Spike,'” Sting explained. “Now things are getting serious. I thought, ‘Now or never.’ So here I am.”

Sting is quick to praise TNA management and the product itself. “Really, what attracted me to TNA was the brand, and the brand was more suited to me. I think I fit the brand better than I would fit a WWE brand,” he said. “It reminds me a lot of WCW, in so many ways it does, not just the fact that we’re not the biggest wrestling company in the world, or even in this country at the moment. But WCW was the same way.”

He looks around the office of TNA and sees old WCW colleagues like Jeff Jarrett and Terry Taylor, along with a few carryovers from the last few days of WCW, like Konnan and Kevin Nash. “It’s just so much the same I can’t even believe it. I just think that because of that, that’s what really brought me in, sucked me in to it, if I was going to be back into it.”

This isn’t the first time Sting has been recognized as the NWA World champion, of course. He beat Ric Flair back at the Great American Bash on July 7, 1990 to finally hit the heights that many expected him to achieve. Flair regained the belt January 11, 1991, and it wasn’t too much longer when the NWA title morphed into the WCW World title, which Sting would hold on five occasions. The belt the Stinger wears today has a lineage to the likes of Orville Brown, Lou Thesz, Terry Funk and Harley Race.

“As far as carrying the world title this time around versus all the other times, there are so many similarities, but this one is obviously a different time. I recognize that,” he said of the NWA title he won in October from Jeff Jarrett at the Bound For Glory pay-per-view. “What’s different about it for me is that I know that I’m, I guess there’s no other way to put it other than my wave, if there was a wave ever, it’s coming into shore. Sometime in 2007, I can’t imagine going beyond that. Sometime in 2007, it’s going to come into shore.”

Yes, fans, this will be the last run of Sting. At 47 years of age, he has no aspirations of continuing to wrestle when he’s Ric Flair’s age. “This is my last run, there’s no question about that. I’m not going to try to fool anybody. I don’t have all that much left in me, especially with some of these guys out there now and some of the stuff they’re doing, some of the moves,” Sting said. “Wrestling has changed, it has changed. A lot of it is still the same, but you’ve got guys that have studied wrestling since they were little kids, and they grew up watching it. They’ve just become so innovative in their moves and things.”

There is some hero worship going on in the TNA dressing room, he admitted. “I get some here and there, definitely. I’ve had some of the younger guys come up and say, ‘Yeah, you’re the reason that I’m in wrestling.’ Those are moments when you just think, ‘Wow. That’s intense.’ Or ‘I developed part of my ring work based on your style, and watching you.’ Some guys say, ‘Even my tights, I got my tights made to look kind of like yours.’ It is flattering.”

The fans at the Impact Zone at Universal Studios in Orlando aren’t like the tourists that WCW used to truck in for its TV tapings at the same location. “The studio fans, the ones that are there, they’re all smart. They know who’s getting pushed, who’s not getting pushed,” Sting said. “All it takes is one little mistake. You could trip, you could fall, you could whatever, and they’ll turn on you in a second. I knew that going in. That was pretty cool, the first time I was in there, and they were chanting, ‘You’ve still got it.'”

Sting looks around the dressing room and sees a lot of hungry faces, competitors who are itching for their chance to hold the promotion’s top title. “There are a lot of guys there, they’re ready. There’s some future stars there, and there’s some future superstars, I believe, that are there, perfectly worthy and capable of the demands the world title has on it,” he said. “2007 is going to be a good year, I know that it is. I think 2006 was also a really good year. You’re going to see some shakeups in 2007, I believe.”

The big shakeup in the wrestling landscape happens this Thursday, with TNA Impact shifting to a primetime slot on Spike TV. The initial show is a two-hour special, and Sting is front and centre as a recognized name.

“Hopefully they still do recognize me. I think they will. Obviously, there’s a generation where they don’t even know who I am,” he said. “For the most, I think wrestling fans, they know. I’ve had some pretty young people come up to me and go, ‘Man, I loved you.’ They were watching me when they were three or four.

“With the two-hour special, we wanted it to be pay-per-view caliber. When you see it, I believe you will be very, very happy, if you’re a TNA fan at all. Even if you’re not, I think you’re going to watch it, and you’ll say, ‘This is awesome.’ It was good.”

Unlike some of the fans Sting mentions in the above story, SLAM! Wrestling producer Greg Oliver can remember seeing him in his UWF days, and remembers exactly where he was when Sting won the NWA World title for the first time — he was watching the Great American Bash at a bar. He can be emailed at [email protected].