Just when one had given up hope on the current state of women’s wrestling, especially if you are a female wrestling fan, along comes a SHIMMER of hope.

Running for a year now, SHIMMER is, alas, considered an alternative. If fills an extreme void and shows a side of women’s wrestling that most fans have not been used to: talented women wrestlers taking part in real matches. 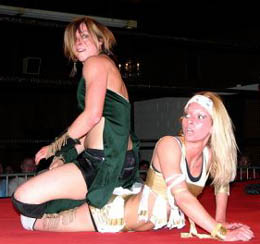 Rebecca Knox has Daizee Haze tied up during their 30-minute two-out-of-three falls match from SHIMMER Volume 5. Photo by Mary-Kate Grosso

SHIMMER is a promotion consisting entirely of women wrestlers.

There are no diva searches, models trying to be wrestlers or heaven forbid, clothes being removed.

The promotion is the brainchild of Dave Prazak, who has always felt the T and A treatment and attitude bestowed to female wrestlers never made sense.

Prazak got his start as a ring announcer in 1996 and also worked as a manager from 1996 until 2002. In 2003, he started co-booking with IWA Mid-South. He credits this experience with teaching him how to run a show and a locker room. It was also during this time that he started booking the women’s division and making contacts that would later help form the beginnings of SHIMMER. When Prazak left IWA, he says he didn’t want all the work he did to be for nothing; he wanted to continue all the good working relationships with the female wrestlers around North America.

In 2004, he started working with Ring of Honor (ROH) and Full Impact Pro (FIP), an affiliate of ROH. During his time there, he started realizing that the ROH and FIP were getting a great stream of revenue from their DVD sales, even if they weren’t drawing in spectacular numbers for the live events. He decided he could duplicate the results with a serious women’s product.

“In my mind, the one thing that has been lacking is a good opportunity for the top female wrestlers to show what they are capable of doing,” he declares. “I wanted to give them a platform to do that. I knew that ROH was never going to do a full-fledged women’s division because their fan base probably wouldn’t react well to women’s matches on a regular basis on their shows. You don’t want to force feed fans matches they don’t necessarily want to see.”

Prazak called on indy wrestler Allison Danger and the two put their heads together to form SHIMMER. It didn’t take long to pack SHIMMER’s roster with some spectacular talent including Daizee Haze, Sara Del Rey, Cheerleader Melissa Anderson, MsChif and Lexie Fyfe. And the ladies were packing the DVDs — five have currently been released, with matches that definitely push the boundaries. Volume 5 alone includes a no-time limit rematch between Del Rey and Mercedes Martinez and an indescribable two-out-of-three falls match between Haze and Rebecca Knox.

“It’s probably the best women’s match I’ve seen on U.S. soil in years, if not ever,” admits Prazak. “They went 29 minutes. Anyone who sees that match is going to realize that good women wrestlers are not only in Japan, they are all over the place. Just because women wrestlers are portrayed a certain way in North American doesn’t mean all of them are at the same level as those you see on TV.”

The attention isn’t going unnoticed. Many well-known faces are appearing on the Shimmer DVDs. Prazak says that Malia Hosaka, who has worked with WCW and WWE, contacted him immediately about the promotion. Hosaka wrestles on Volumes 3, 4 and 5.

“She has been a great influence on the locker room,” expresses Prazak. “A lot of the younger wrestlers have learned a lot from her. It’s good to have a veteran influence.”

Even Canadian favorite Nattie Neidhart will be taking part. Neidhart makes her debut for SHIMMER on October 22, taping three matches for Volumes 7 and 8 of the DVD series in Berwyn, Illinois, just outside Chicago. Other Canadians who have participated include Portia Perez, LuFisto, Shantelle Taylor and Tiana Ringer.

Naturally, a few of the SHIMMER girls have signed with the WWE. Most notably is Beth Phoenix, but there’s also Shantelle Taylor and Krissy Vaine in their developmental system. Prazak says he is happy for the women and wishes them well in achieving their goals.

“They are not going to be making a living working for SHIMMER,” he admits. “It is more about having the kind of matches that they know they are capable of having and that they might not get the opportunity on other independent shows. You won’t see other independent promoters letting women go 30 minutes, but you will in SHIMMER.”

He notes that SHIMMER is just a part of the women’s independent careers. Particularly in Phoenix’s case who he says spent three to four years with the WWE’s Ohio Valley Wrestling affiliate trying to get a developmental deal, all on her own dime.

As for the future of SHIMMER, Prazak says the goal is to keep doing what they’ve been doing and produce as many DVDs per year as the market will be able to handle.

“We want to continue to gain momentum and build our following,” he reveals. “And to keep giving women’s wrestlers the opportunity to show what they are capable of. I have a lot of confidence in the roster we’ve built and I have no doubt in mind as long as you put out a quality wrestling product, male or female, if it is good people will support it. ”