In the off-season for hockey, baseball or football, one often hears about the golf games of the players. In wrestling, there never has been an off-season. So Chavo Guerrero Sr. warns that at the upcoming Eddie Guerrero Memorial Golf tournament not to expect much from him or his peers on the links.

“We’re wrestlers, man, we’re not golfers. Some of them, like Harley Race, they try and all that. We’re not golfers, man. We just go out and golf for fun,” Guerrero Sr. said with a laugh. “As far as taking it serious? I don’t think any of us can actually say — don’t get me wrong, the Guerrero brothers play golf, but once you start taking it serious, you go in in a bad mood, and come out in a bad mood.”

Instead of concentrating on the competition aspect of the tournament on Saturday, October 21st, he’s geared up for the camaraderie. “We just go out and play golf. I respect the game very much. I enjoy it. But to be a good golfer, you’ve got to be consistent. You’ve got to be out there every day, working on that. We just don’t have time; we’re on the road all the time. It’s a good thing to get together.” 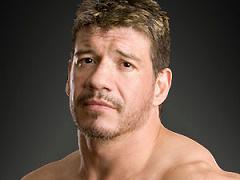 The first annual Eddie Guerrero Memorial Golf tournament is quickly becoming a who’s who event. The line-up at the all-day affair at the Summerfield Crossing Golf Course in Tampa, Florida, is pretty impressive, even if the scores may not be. Confirmed names include Chavo Sr., and his brothers Hector and Mando Guerrero, Kendall and Barry Windham, Haku, Blackjack Mulligan, Roddy Piper, Greg Valentine, Pat Tanaka, Ricky Santana, Dory and Terry Funk, Art Flores and Jack Brisco. Some of them, however, will just be a part of the meet and greets on the Friday night at two local Cherry’s Riverview restaurant locations.

Proceeds from the tournament go to the Riverview Boys and Girls Club and the Eddie Guerrero Memorial fund for Eddie’s daughters.

Tournament organizer Clyde Jensen met Guerrero at another charity tournament earlier this year, and they talked about a day for Eddie, who died in November 2005. “He said this is something that he wanted to do for his brother and his foundation. From there, it just snowballed,” said Jensen. “It sounded like a good idea. He asked me if I would head the tournament up. I told him I would.”

While Chavo Sr. is booking the wrestlers, Jensen has the expertise in running golf tournaments. “The public is starting to come around. This is how golf tournaments go. Usually you get your big push 8-10 days before the tournament,” he said. “We’re sitting at about 13 teams right now signed up, and a ton of people are calling me, saying they’re going to bring a team, and they’re going to do this, they’re going to do that. I never count my chickens before they hatch. Usually the day of the tournament, you’ll have between three and five teams sign up.” Jensen’s hope is that he ends up with 25 teams, and one Japanese fan has already booked a spot.

Like Guerrero Sr., Jensen recognizes the grapplers aren’t golfing greats. “A lot of the guys aren’t there for the golf, they’re there for Chavo and in support of his family, which is a neat thing,” Jensen said, adding that he’s pretty pumped to meet one of his all-time favorites, Barry Windham (whom he even remembered as the short-lived Yellow Dog).

For Guerrero Sr., it’s a chance to revisit some old friends, and some old foes. Like Roddy Piper. “He told me yes right away. He had no afterthoughts or before thoughts. As soon as I asked him, he said, ‘Anything for you, Chavo. Anything for the Guerreros.’ He’s a gentleman. He’s taking time out of his busy schedule.”

The Guerrero brothers will all be there, of course. It’s a welcomed chance to reunite. “We see each other more often now. We’ve always been tight, but with the passing of my brother, we’re tighter now and closer,” said Guerrero Sr. “I’m looking very much forward to it, seeing some old foes and some old friends, in the name of charity and Jesus, and have a good time out there. I think it’ll be good for Tampa too.”