I was never a big fan of Billy Jack Haynes in the 1980s. In an era of flashy and exciting characters, I found his down-home simplistic persona of a straight-shooting everyman pretty bland and boring. Odd, then, that I would have found his real life story so interesting?

He tells that real life story in a new DVD released by RF Video as part of their Shoot Interview series. Over the course of the two-disc interview, Haynes opens up fully, sharing personal highlights, traumas, successes, failures, and his life in the industry that took him from the top of the world to the depths of despair. 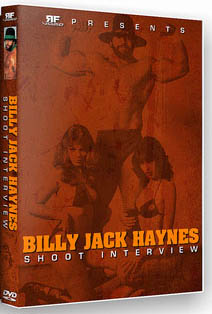 To give you an example of how much Haynes reveals, within the first five minutes, he openly weeps while detailing a series of personal tragedies that happened early in his life: namely his being molested by a relative, the death of his mother, and his father’s blindness. Those events, he says, planted the roots of anger deep in Haynes while at the same time, strengthened the love and respect he had for his father. Both of those subsequently impacted many of the major decisions he made over the course of his life.

Haynes discusses his entire career, from training at Stu Hart’s Dungeon to wrestling in various promotions and territories, bouncing at times from Portland to Florida to Texas, the then-WWF where many fans know him from, and then his cup-of-coffee stint in WCW. The interview sometimes feels like listening to a stream of consciousness, as Haynes occasionally jumps from time to time or place to place, or wanders off on tangents to tell stories about many of the big names of wrestling from the 1980s.

The stories he tells range from the funny to the sad to the just plain bizarre, and will be particularly interesting for anyone who grew up watching during that time period. A lot of names get dropped when he talks about his early career, including stories about his dealings with Barry Windham, the Von Erich family, Dusty Rhodes, and Ric Flair. He’s particularly candid about people he doesn’t like, including Windham who Haynes apparently gave a hard lesson to about respect one night in the locker room.

The stories about his short WWE career are also fun to hear. Haynes was there first-hand for a lot of the tumultuous goings-on at the time, including the infamous fight between the Rougeau Brothers and the British Bulldogs (The Dynamite Kid and Davey Boy Smith), and the steroid scandal that nearly brought down Vince McMahon for good. Haynes explains the reason he testified against McMahon at the trial, which is only one of the times they had a difference of opinion. He holds nothing back when talking about Vince, even admitting to coming to an arena one night (long after his WWE career ended) to shoot McMahon dead.

This incident is just one of many stories that Haynes shares that show how the industry has negatively affected his life. In fact, there are many times during the interview where you get a sense, sadly, that wrestling has turned him into a mere shell of the man he once was. From tales of his post-wrestling life working for a drug smuggling operation, to his numerous suicide attempts, the interview eventually goes down some dark scary alleyways. And credit must be given to Haynes — and the crew from RF Video who draw it out of him — for being so open and honest about it.

It’s that frankness that makes this a great shoot interview, and one that’s highly recommended viewing. For anyone who grew up watching Haynes, it’s a neat glimpse behind the curtain during one of wrestling’s hottest eras. Even people who weren’t fans of Haynes back in the day will find this a compelling watch. It’s just too bad he never exhibited this much personality in his promos back in the day.