The best years of Donald Lortie’s career were fought in relative secrecy, wearing hospital whites under a mask as a part of the Medics tag team with Tony Gonzales. But Lortie, who died a week ago, was also a successful amateur, and a member of one of Canada’s royal families of wrestling.

Born August 25, 1930 in Montreal, Quebec, his uncles were Bob and Paul Lortie, a pair of grappling brothers who found success both in la belle province, and abroad. Two of his cousins, Andre and Paul (who was sometimes known as Ray) started before Donald, but their careers didn’t last very long. (Their father, Rene, was the brother of Bob and Paul.) 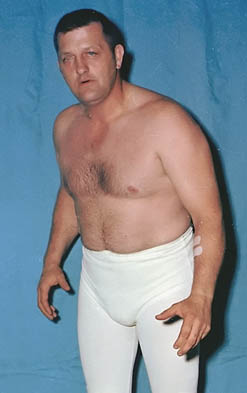 Taken all together, the Lortie family is an unappreciated gem of Canadian pro wrestling history.

Paul Lortie was the biggest star, and regularly outshone his brother. Their native tongue allowed for foreign promoters to bill them from France. “The Famous French Champion. The hair-raising mauler. Devil-may-care. Do or Die. Just arrived back from S. Africa & Australia unbeaten,” read a 1937 English poster promoting a Paul Lortie versus Maurice Letchford bout in Southampton. “The Ever Thrilling French Ace. The Sensational Drop Kick Artist. The lad of a Thousand Thrills,” read another from 1936 in West Bromwich. Bob and Paul would later promote in and around Burlington, Vermont as well.

It was only natural that a young Donald Lortie would go into the grappling game as well. Like his cousins, he trained at Palais Nationale, starting at age 17, and he became a talented Greco-Roman amateur. His uncles had a hand in his schooling as a professional. Coming in at 5-foot-11, he explained in an interview in early 2002 how his physique developed. “I started at 180 in Montreal and I gradually as the years go by … I did a lot of workouts. I gained some weight. I go up to 190, 200, 220. I stopped at 220.”

Outside of Quebec, Donald Lortie’s first big break came in Northern Ontario, hitting logging towns under various guises, including Pierre DeGlane, and he quickly learned that there was a little more money in being a heel.

But it is his team with Gonzales that southern wrestling fans most remember. The two met in Texas, and became a smash hit in sterile uniforms in 1962, when Gulf Coast promoter Rocky McGuire dubbed them the Masked Medics. They would team in the Gulf Coast territory of Louisiana-Alabama-Florida for many years, with success also coming in Texas and Tennessee.

Lortie learned to love life in Louisiana. “Most of the places I liked were in the South, actually. New Orleans or Baton Rouge or Layfayette. All of those places.” Home would become a small town 40 miles from New Orleans. “I settled in the big name — Saint Amant!” he recalled with a hearty laugh, his French-Canadian accent flavoured with the distinctiveness of Cajun and Creole. 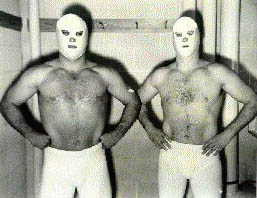 In all, his wrestling career lasted about 14 years.

He recalled his decision to quit. “I was sitting in a hotel … I had three kids and I was tired and travelling and all that. I decided it’s either my kids or wrestling. I think, well, that was it. The weekend came, and I went to the promoter and told him, ‘Goodbye, I’m finished, that’s it.’ So I just quit.” (Actually, he did work on rare occasions after that moment, and a serious shoulder finally finished him off in 1968.)

Lortie worked as a longshoreman for Allied Chemical in Baton Rouge, and retired there after 17 years. “I think I made the right decision. It was rough. Either side you want to look at it, it was rough.”

With his death on Saturday, August 5th of congestive heart failure, after a lengthy illness and a six-year battle with Alzheimer’s, Lortie leaves behind his wife of 49 years, Claire Lambert Lortie. “It was an interesting life,” his wife said in The Pro Wrestling Hall of Fame: The Tag Teams. “With the mask, it was almost like he led a double life. He enjoyed it and I enjoyed it.”