D.C. Fanfest is a ‘Capital’ Idea

ROCKVILLE, Md. — In the past, promoter Greg Price’s wrestling legends conventions have overcome hurdles such as hurricanes, intoxicated wrestlers, and same-day competition from the Super Bowl.

Wrestlers and fans from across the country dealt more or less successfully with heightened security measures and airport delays in the wake of the foiled bombing plot in England to convene here at the Capitol Legends Fanfest this past weekend. 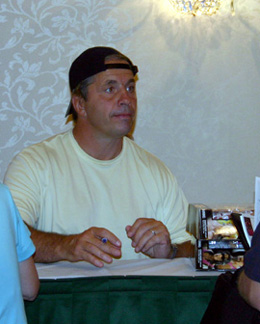 New airline security regulations were a reason Superstar Billy Graham, one of the headliners, was grounded in his home state of Arizona. His ticket was listed under Graham, but his real name of Wayne Coleman was on prescription medicine. That difference is a no-no in the new world of air travel, and the ailing Graham cannot travel without his medication.

Other than that disappointment, though, Price’s first fanfest outside of North Carolina brought mostly smiles to fans, vendors, and wrestlers.

“It was very well done. It was a good turnout,” said a slightly hobbled Rocky Johnson, who drove to suburban Maryland from Florida because doctors wouldn’t clear his surgically repaired knee for air travel. “I got to see a lot of guys I haven’t seen in a long time.”

Officials at the Doubletree Hotel estimated about 500 fans passed through the lobby during the weekend from as far away as British Columbia. Jeff Locher, a huge Midnight Express fan, flew from Las Vegas to meet and socialize with his favorites and pronounced the weekend “awesome.”

To get to that point, though, wrestlers described a litany of flight-related issues in getting to and from the three airports that serve the nation’s capital. Condrey and Eaton thought they’d beat the crowd in flying from Charlotte, N.C. to Washington, D.C. by arriving more than two hours early for a 7 a.m. departure.

“The line was out the door [of the terminal],” an amazed Condrey said. “Five o’clock in the morning and you couldn’t believe it. I hate to say it, but we had to cut in line a little bit to make our flight.” Heading back to Colorado, Hansen left at the inhuman hour of 3 a.m. to ensure he could get through security lines at Dulles International Airport. And, flying from Canada, Martel needed to stop by a convenience store before he arrived at the fanfest to stock up on now-contraband items such as shaving cream.

Air travel became an issue on Sunday afternoon, when Hart and Sherri Martel had to leave during a marathon, five-hour signing session to make their connections. Price accommodated as many fans as possible by pulling an agreeable Hart from a podium to a single seat so more fans could get the Hitman’s signature. Without the new restrictions on travel, implemented the day before the event, that might not have been an issue, convention organizers said.

Hart did impress fans with his candor during a two-hour, question-and-answer session Saturday night. Touching on almost every aspect of his career — including his umpteenth recitation of his world title loss at the 1997 Survivor Series in Montreal — Hart recalled how he was afraid of WWF owner Vince McMahon in his early days with the company in the 1980s.

One night in Glens Falls, N.Y., he and partner Jim Neidhart, who shared the stage at the fanfest forum, had a few too many adult beverages at a restaurant. One of the waitresses was particularly disagreeable, Hart recalled, and intentionally cut off their beer supply before final call. Hart admitted to guffaws that he called her “a bitch … I stole Jim’s gimmick that night because usually that was Jim’s job.”

With several policemen entering the restaurant to calm matters, the two sought out a party of wrestlers that sat on the other side of the restaurant behind a partition. Hart and Neidhart pushed and pushed on the partition until it cracked open, and, lo and behold, there sat McMahon and a group of front office officials.

“I thought this is the last place I want to be … Then I realized when I was standing there that Vince was drunker than I was,” Hart recalled to uproarious laughter. The kicker, though, was that McMahon attempted to call Hart on his transgressions the next day. But, after trying to recall this previous night, the WWF honcho concluded, “I know you’re in trouble for something, but I can’t remember what it is.”

Lane, now a commentator on televised speedboat events, cracked up the crowd by recalling a prank he pulled on the late Curt Hennig. Hennig was one of the last wrestlers to get on a plane one time, and looked for compartment after compartment in which to jam his huge, four-foot long duffle bag.

Finally, “Mr. Perfect” found a small spot, and worked feverishly to wedge in the bag, brushing up against a male passenger in an aisle seat as he did so. Struck with inspiration, Lane reached over to Hennig’s drawstring pants and pulled them down.

“I didn’t know that he didn’t wear underwear,” Lane laughed. “He couldn’t the pants because he’s got both arms up pushing [the bag]. His genitalia was in the guy’s face.” 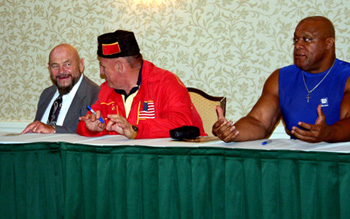 While most lines moved quickly, Sunday’s autograph session, scheduled for three hours, dragged on for nearly five. Even though they developed severe cases of writers’ cramp — the inside of Koloff’s hand was pure blue from permanent marker — wrestlers said they were happy to stay until the end to meet and greet fans. “By the end I was down to ‘Tony A,'” said WWE Hall of Famer Tony Atlas.

“I did not expect that,” Del “The Patriot” Wilkes said as he stretched his hand to put a sense of feeling back in his digits. “That was all right, though. I’m glad I did it.”

Price is planning a return to Charlotte next August and also considering a legends fanfest for Atlanta.