Guest column: Bearing it all for Ginger – the stupidest thing I’ve ever done 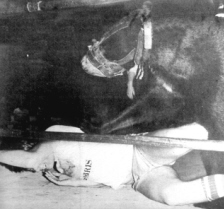 What’s the stupidest thing you’ve ever done in your life? I’m sure you have one. If not, then I’ve got more than enough for both of us. Next week marks the 25th anniversary of the absolute epic moment of stupidity in my life. It was more than stupid. It was stupid-and-a-half.

In the summer of 1981 a just-a-bit-seedier-than-a-carny guy came through the doors of the Prescott Journal in Prescott, Ontario, where I was enslaved as a summer student at a buck-fifty an hour. God bless ya Dad. I know he’s smiling and looking down at me saying, “Yeah, son, but that was 1981 money…”

The poster said that “Big Time Wrestling” was coming to the Prescott Community Centre, now the Leo Boivin Arena. All of the big names were coming. Whipper Watson Junior, The Sheik, a couple of fat, bald, hairy Slavic dudes, and the headliner, Ginger the Wrestling Bear.

So Steve Bonisteel, our editor, tagteamed with Bruce Hayes, and they tapped right into my unstable craving for making a complete idiot of myself in public.

Within seconds Steve was on the phone with the Big Time Wrestling promoter/poster guy/busdriver/janitor/surgeon. He hung up the phone and had a big smile and this Chucky-becomes-an-editor look on is face.

“It’s all set up,” he beamed. “You will be the volunteer from the audience to fight Ginger.”

What have I done now? Ohhhhh crap!

Wednesday night arrived — those six days went quickly — and the Leo was filled to the rafters with the townsfolk of Prescott. Remember, this was before specialty channels. You had to actually leave your home to see a good sociological train wreck, like the one I was about to be.

I was destined to become an urban legend that night, shredded to death by this huge, ugly, smelly, shaggy, beast being swarmed by flies. Did I say huge?

So I’m there in the ring, wondering why I can’t swallow, hoping I don’t soil myself in front of the whole town, looking at this thing. The bear’s trainer, a slightly bigger and smellier and shaggier man than Ginger who was likely a retired wrestling bear himself, approached me gruffly.

“She’s declawed, but she can still hurt you so be careful. Don’t go near her head because the muzzle isn’t fastened, it just slips on. Don’t pull her hair, that makes her mad. When you’re ready, just walk into her. When I give her a signal, she will pin you. Just let her and you will be okay.”

Walk into her? For all the times I fought through ADD in my life, this was the one moment I wish I actually hadn’t been paying attention.

So I “walked into Ginger”, and the huge, hairy trainer holding Ginger on a chain made this primal sound and the beast rose majestically onto its hind legs, scaring away the hundred or so flies buzzing around its face, and thudded its enormous paws onto my not-so-big-after-all shoulders.

Standing up, Ginger was almost eight feet tall. I reached up and put my arms on the bear’s shoulders, and we looked like two kids slow dancing at their first sixth grade sock hop. Actually, that was slightly more frightening than wrestling a bear.

Then, without warning, the big hairy man gave a signal, and in a flash, I was flat on my back, looking at the light fixtures, while Ginger started to climb on top of me for the pin.

Realizing my moment of glory was nearly over and I had yet to make a worthy spectacle or idiot of myself, I panicked. You see, I was a wrestling fan, and I knew what to do. I was near the ropes at the side of the ring, and I quickly rolled onto my side and started pounding the mat, feigning agony, just like wrestlers and soccer players do on TV. My leg was also on the bottom rope, which nullifies the pin. Those are the rules in wrestling. I mean real wrestling, not that crappy, boring kind they do in high school and the Olympics.

So I got up, and figuring this would be the only time I would ever be in a wrestling ring in my life, I started running around and bouncing off the ropes, stopping occasionally to flex my disproportionately chicken-like arms.

I went back and forth, and Ginger was getting a little worked up and the big hairy man started yelling at me to stop.

Ginger was trying to follow me around and was getting tangled in the chain and was getting upset and confused. The trainer looked at me, with foam leaking out of the corner of his mouth and yellowing, angry eyes with Wal-Mart Lab red-eye.

“What do you think this is, a comedy show?” he barked. Evidently, he didn’t get the memo. He dug his heels in and fought in waterski position to try and control the bear, but I didn’t care. I was driven by adrenaline from the roar of the crowd, even if they were all laughing at me, not with me.

Even my mild-mannered and very proper grandfather was standing along the boards of the arena pounding the glass with his fists while laughing uncontrollably at me.

Eventually, the bear trainer calmed me down enough so that I could grapple with Ginger a bit more, though I’m sure he let the bear take a few liberties at me. She seemed a lot rougher and more aggressive the second time around and swatted me around pretty good. 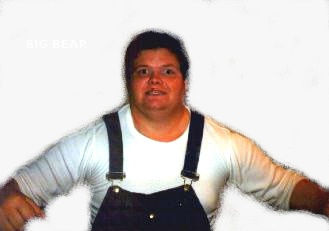 He gave the signal again, and wham, I was down. This time, I let the beast pin me, not wanting to freak it out. The fact that Ginger was rubbing her head against my side, trying to slip the muzzle off, while I lay on my back with a tree trunk size leg and paw on me kind of added to the “thrill” of the experience.

I immediately thought of all those stories you read, you know, “Camper mauled to death by bear”. I lay there, helpless, thinking of how much fun the Journal staff could have if Ginger would have worked the muzzle off and went Siegfried and Roy on my throat.

Ginger took on more comers that night. Bill Martineau gave it a try, and then Steve Dring, a brilliant soccer player, got in and lasted several minutes with Ginger before he was finally pinned.

Over the years, Ginger took on thousands of bozos like me in small towns across North America throughout the 1980s.

But one of those bozos, a larger-than-life animated character named Barry “Bear” Vinson of Sparta, Tennessee, actually beat Ginger in the ring. In over 10,000 matches, Ginger lost only once. Bear Vinson, now 46, put the smackdown on Ginger back in 1980.

“There was this elderly gentleman with Ginger as a sideshow at the local fair,” said the Bear with his thick, southern drawl from his home in Tennessee. “People were lined up to wrassle that thing, and my friend said to me ‘‘Bear, y’all gotta get in there and wrassle that bear.’ I just looked at him and said, ‘I ain’t gonna wrassle no dang bear.'”

Bear Vinson was no ordinary 20-year-old. Nicknamed the Hulk, he was a big, strapping lad who played offensive line at Tennessee Tech. He bench pressed 575 pounds and he could squat 1400 pounds. In the days before steroid use, these numbers are staggering. Bear was also undefeated at the state level as an arm wrestler. If anyone could take out Ginger, it was Bear.

“I watched that dang bear for three days,” said Bear. “I studied it and I watched it, and then I figured I would give it a try, but figured I’d change things up. You know, surprise her.”

It was oldtimers day at the fair that day, and Bear was wearing overalls. The trainer had been smashing watermelons on the ground for Ginger to eat, and Bear noticed how slick the floor was and that Ginger’s opponents couldn’t get any footing — not that it would matter.

“Instead of just climbing through the ropes, I dove through them, right into the ring, said Bear, who I could tell was wishing he could demonstrate it even though we were talking on the phone. “She came right at me and was swinging her big arms. Even though she was declawed, she slashed my chest pretty good. But out of sheer terror, I just did what we were trained to do in football. Keep your feet shoulder width apart, and keep them moving. I tried not to get to close to her where she could hurt me and get an advantage.”

Bear managed to get Ginger on all fours, and then he pounced on her back. Ginger started swiping her big paws at his feet, but he kept backpedaling away from her swats.”

Bear got Ginger up and then went at her feet. Somehow, he managed to flip ginger over his back, and the great Alaskan bear landed with a thud.

“She fell, but she got up swinging at me,” Bear explained. “And I did the same thing and she flipped over me again.”Ginger got up and just walked over to her corner and sat down. “She wouldn’t get back up,” said Bear. “The trainer came up to me and said he wouldn’t allow me to wrassle her no more. I said to him don’t worry, ‘cause I don’t wanna wrassle no dang bear no more. I figured it’s just one of them things you get to tell your kids about some day.”

Bear’s legend grew in Sparta, but outside of the town, many doubted his 725-pound tale. Even his ex-wife, a doctor, had her doubts, until a client came in who happened to be from Sparta. When the girl found out that her doctor was married to Bear, the story was confirmed.

“She came home and said ‘I thought you was just jokin’, but this girl came in and she didn’t know me from diddly, and she said it was true.’ In Sparta, that’s how I got my nickname, Bear. That and the fact I was 14 pounds, nine ounces when I was born.”

Bear became a computer teacher and has been a motivational speaker, and his story of defeating ginger the Wrestling Bear is one of his favourite ones to tell.

“You always have to believe in yourself and stay positive,” he said. “You’re dealt a hand of cards every day and you just gotta put your poker face on and do the best you can.

“I walked in there believin’ I could beat Ginger, and I sized her up and went in with a plan. It just shows that you can do anything you put your mind to in this world.”

After talking to Bear, I thought about my experience in the ring with Ginger. I didn’t have a plan. Well, I kind of had a plan, but it was more to act like an idiot than to actually wrestle the bear. Then the plan became not to get killed.

And I don’t think a plan would have done much for me. But it worked for Bear Vinson — a man who earned his nickname the hard way. I guess, in some sort of twisted Freudian way, I overcame a big fear of bears by actually wrestling one.

But as for my other big phobia? There’s no bloody way I’ll ever get into the ring and wrestle a clown.

EDITOR’S NOTE: This story originally appeared in the Prescott Journal, and on Sportsology.net, and is re-printed with permission.