Imagine if the Disney fired all of their animators and made their next movie using crudely-drawn stick figures. Or if Nestlé introduced a new chocolate bar filled with crunchy frog pieces. What’s that? No company would be crazy enough to sabotage itself with ridiculous moves like that? Well, according to the new book World Wrestling Insanity: The Decline and Fall of a Family Empire, that’s exactly what WWE has been doing for the past few years.

Author James Guttman, the editor of WorldWrestlingInsanity.com puts forth a lot of evidence to support a hypothesis that Vince McMahon is hurting his company through a blend of nepotism, creative stagnancy, and good old-fashioned ego. The result is a satirical, sarcastic look at WWE’s problems that’s a lot like wrestling itself: fun, and entertaining, but nothing that should be taken too seriously. 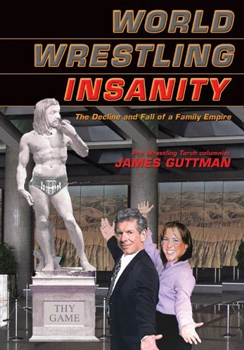 Of course, Vince isn’t the sole target of Guttman’s blunt pen. Shane and Stephanie McMahon are also given sufficient ink, as is Triple H — indeed, nearly one quarter of the book’s 234 pages is a chapter on Hunter’s incredible push from October 2002 through the summer of 2005. This run saw the burial of some of the industry’s big names, and the shutting down of others who tried to break through the proverbial glass ceiling. The book chronicles all of them, and during this time, readers get to relive some of wrestling’s worst moments, including what may be the absolute nadir, the Katie Vick storyline.

The book laments how Scott Steiner, Goldberg, and Kevin Nash were brought in to great accolades, only to job for Hunter before they could recreate their previous WCW success. Triple H’s conquests over Booker T, Eugene, and Randy Orton — even, Guttman says, if they seemed illogical and bad for business — are also given sufficient ink. Even when Hunter lost his feuds, such as against Shawn Michaels, Shelton Benjamin, Chris Benoit and Batista, the book shows how this was done to still make Hunter appear strong. According to Guttman, the master manipulation employed by Vince’s son-in-law to protect his spot, required sheer brilliance, and he gives them full credit for doing so, albeit in his standard lighthearted way.

Other chapters are dedicated to some of the company’s other questionable decisions, including the Diva search and the Tough Enough competition, the Snitsky baby-killer character, Muhammad Hassan’s terrorists, and (shudder) poems by Heidenreich. Each chapter is supplemented by Guttman’s trademark photoshop creations, which paint the topics of his lampooning in an amusing light, such as the cover which shows Vince and Stephanie McMahon posing in front of the iconic statue of Michaelangelo’s David done up as Triple H.

As said, the book isn’t by any means meant to be taken seriously, and it’s clear that Guttman has written it primarily so that people can have a little fun. It’s by no means an academic thesis — for example, most of his research is limited to watching the shows on TV and interviews with people who had been let go from the company shortly before the book was written, like Charlie Haas, and Tom Pritchard, or long before like D’Lo Brown, and others who haven’t had a connection to WWE in years, like Missy Hyatt, Elix Skipper and Terry Funk.

But if you’re looking to fill a few hours with an amusing look back at some of wrestling’s more questionable recent calls, then World Wrestling Insanity might be what you’re looking for.

EDITOR’S NOTE: We’ll have an interview with James Guttman on SLAM! Wrestling next week.