At times fascinating and other times frustrating, the new DVD The World’s Greatest Managers will bring back good memories and make you want to throw it across the room.

To call it an inconsistent effort is an understatement. For every great interview aired from a famed manager of the past (available in their entirety in the Extras section), there are puzzling choices and holes big enough to drive a bus through.

Culled from the ever-growing WWE video archive, The World’s Greatest Managers takes an uneven, surface level look at managing, offering simplistic attempts to explain what makes a good manager, how to cheat and how to champion a wrestler. The irony of WWE stars of today talking about the roles of managers should not be lost; really, what, exactly, does John Cena know about managers? The guy can talk and has been on his own his whole career. Now Bobby Eaton, there’s a guy who made a career out of having a manager — but of course he’s not on the DVD. 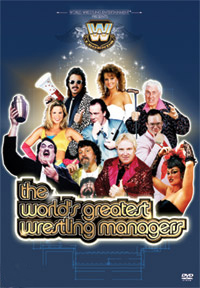 WWE historical revisionism abounds. In the segment on women managers, it’s the current “valet-style” that are featured, yet even that doesn’t talk about Missy Hyatt, Sunshine and Precious in the Texas-based World Class Championship Wrestling, which kickstarted it all. Needless to say, no mention is made of the fact that female managers have been around at least since Gorgeous George and his wife Cheri.

Talking heads abound on The World’s Greatest Managers, but they are the same old talking heads; no one would ever accuse the WWE DVD production team of going over and above to get a really cool, unique interview or segment. In fact, rather than hiring someone exciting to even host the DVD — c’mon, you can’t tell me Jimmy Hart wouldn’t have hosted the DVD for a couple of bucks — WWE settled on Todd Grisham. What’s worse, he even tries a couple of comedy spots that fall so flat it’s downright embarrassing.

Alternating between the short analysis pieces are featurettes on a select few managers from the 1970s to the 1990s. Without a lot of rhyme or reason, other than for the most part they worked for WWE at some point in their careers, here’s who is featured, along with my quick take on it, mostly listing the shortcomings.

Others, like King Curtis Iaukea, Slick, Oliver Humperdink, Teddy Long, J.J. Dillon, and Paul Ellering, we only get a tiny glimpse of.

Looking back on my thoughts to this point, it might seem that I hated this DVD. I didn’t. I had a lot of fun revisiting some old friends — there’s even a Fuji Vice episode (far more painful that I remembered).

But given that I’ve grown up from that teenager obsessed with WWF wrestling, shouldn’t the company have grown up too, providing me with intelligent, well thought-out entertainment packages? The 16-year-olds aren’t the ones buying these vintage DVDs.

The World’s Greatest Managers isn’t intelligent or well thought-out, but it does have its fun moments.

Greg Oliver, a pencil-neck geek in every sense of the word, sends a shout out to a manager you’ve never heard of – Will E. Beatum, who has appeared under a Destroyer-like mask in southern Ontario cards in tiny towns like Tilsonburg. Send Greg your own obscure managing favourites to [email protected]