For most people across North America, Pete Rose is best remembered as one of the best baseball players in history. Though wrestling fans will readily acknowledge the man known as Charlie Hustle for his many accomplishments on the diamond, it is in a different four-sided venue that they’ll remember him best.

Rose, you see, is one of many athletes who have done crossover appearances for World Wrestling Entertainment. During the Attitude Era, Rose was a fixture at WrestleMania, appearing at the annual cavalcade of the ring wars three years in a row, a feat that no other non-WWE talent has ever accomplished. 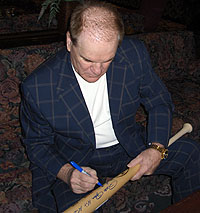 Each of those years, Rose was not exactly put in the role that most celebrities are in during the hallmark WWE event. In most cases, they will sing the national anthem, act as a guest timekeeper or referee or escort a featured wrestler to the ring.

Twice in that run, Rose would end up on his back courtesy of a tombstone or chokeslam as fans applauded. The third time, however, Rose was not so lucky. Decked out as the San Diego Chicken, Rose would not only be manhandled by Kane, but would also be a recipient of a Stink Face from then WWE star Rikishi.

With this kind of treatment, one may not expect Rose to look back fondly on his time with the Connecticut-based organization, but he does.

“It’s just fun, it’s entertainment. It’s the best damn thing money can buy.” Rose said of WWE during a press conference prior to speaking at the 34th annual “Y” Sports Dinner in Winnipeg.

Rose’s work in the ring would later be recognized by WWE as he was inducted into their Hall of Fame as the first member of the celebrity wing. Fittingly, Kane inducted Rose into the Hall that year. He would also make an appearance at WrestleMania XX, as part of a tribute to the Class of 2004.

Though he has not been at a WWE event since (at least in an in-ring role), he still makes time to speak with his fans from both baseball stadiums and the squared circle. As Rose noted, he recently appeared in Calgary alongside one of the legends of the mat wars – Bret Hart. His appearance in Winnipeg for the Sports Dinner drew a crowd of over 900 attendees. The event benefited the Rose and Max Rady Jewish Community Centre.

During these events, as well as at his station in Las Vegas, Rose takes time to talk with his fans, who show their appreciation for everything he has done in sports and entertainment. Rose sees these opportunities as giving something back to the fans who supported him through his career.

“That’s what you play for – the fans,” Rose said, “and the fans understand that I understood that.”