The Toronto Congress Center was invaded on two fronts this past Saturday with an afternoon of unconventional mayhem. The worlds of Japanese anime and professional wrestling collided in what can only be described as a coming together of two unique brands of entertainment.

What event could cause such a stir? How about the Super Hardcore Anime Wrestling Expo. Combining the 10th Annual Anime North Convention and the Great Canadian Wrestling Expo (GCWE) was the brainchild of Ben Gusz, Jon Lee, and Dave Bigas. The merger was a gamble for GCWE organizer Bigas, as he was uncertain how the anime audience would take to pro wrestling. “We were worried no one would come over to our part of the convention. But what an awesome experience! Some proceeds are going to Sick Kids Hospital, the seats are packed and the crowd is hot,” Bigas said. 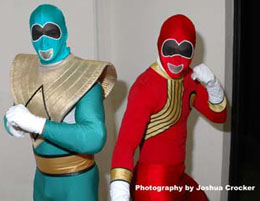 The Power Rangers (above) and TJ Wilson (below). Photos by Joshua Crocker

Media Coordinator Brian Gusz was estimating 12,000 to 13,000 anime fans to be through the convention’s doors from May 26-28. From SLAM! Wrestling’s visit on Saturday, Gusz was well on his way to reaching that mark. The crowd was packed with enthusiasts dressed in their favourite Japanese anime character costumes; the challenge was to draw them over to the squared circle.

To do this Bigas and booker Jeremy Landry had to get creative with the style of wrestling they would present to this comic-oriented audience. After much deliberation the idea to have anime character gimmick matches was born. “To have our performers dressed up like the fans favourite anime heroes would be a dream for these people. We’d have anime and wrestling fans mixed together,” explains Bigas. Landry continues, “usually there are just hardcore sports entertainment fans at our shows, but with this convention we have the opportunity to a expose a whole different audience and generation to pro wrestling.”

There were three gimmick matches on the card, and clearly the crowd was on fire for all of these contests. For instance, one of the strangest sights was for loveable Elmo (from Sesame Street) defeating Japanese anime character Guyver with a Canadian Destroyer. Add to that a green Power Ranger taking out a red Power Ranger with a fire ball, and Team Sailor Moon edging Team Pokemon, and you have a one-of-a-kind day of wrestling.

Jesse (Adaire Clements) and James (Tim Allen) from Team Pokemon loved incorporating the actions and movements of their characters into the match up. Clements was especially thrilled to be in attendance. “The loud crowd really got us excited. But Tim and I both think that at a convention like this there should be a lot more than three gimmick based contests. The main audience is not a traditional wrestling crowd and would stay more focused if they saw everyone as an anime character.”

All of the wacky, unconventional matches were entertaining, but from a pure wrestling standpoint the bout of the night was a triple threat match between “Stampede Kid” T.J. Wilson, “Hot Shot” Johnny Devine, and Michael Elgin. The high flying action had even the most casual fan on their feet. In the end Elgin pulled out the upset and took home the Great Canadian Wrestling Expo championship.

Nattie Neidhart also made an appearance at the event, accompanying her boyfriend T.J. Wilson to the ring. She continues to recover from severe knee injury surgery but says by the summer time she will be back and better then ever. “My recovery is coming along great and the doctors say I’m ahead of schedule for a return. In the next few months I plan on touring Italy, Germany, maybe England, and I’d love to do another trip to Japan.” The third-generation star plans on revamping her style on these tours and will hopefully reach her ultimate dream of continuing the Hart legacy in the WWE sooner rather than later. 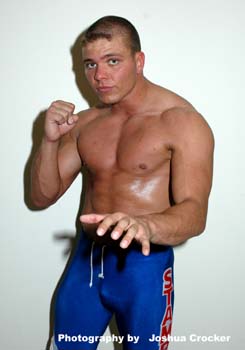 The 10th Annual Anime North Convention was a tremendous success for both the comic and wrestling portions. The performers and more importantly the fans seemed to all have an outstanding experience that will surely beg the question, will the Great Canadian Wrestling Expo return next year to rock the anime world once again?