Topps has returned to the ring to defend its title as the reigning card company for World Wrestling Entertainment.

WWE Heritage Chrome, the latest issue from the New York-based sports collectibles company, has been on shelves for a little bit now and has been a decent follow to the first Heritage product.

For those not familiar, Chrome has been around the sports hobby for a few years. Generally, the set mimics an earlier release (in this case Heritage) with a couple changes. This generally reflects players who have switched teams or were called up from the minors during the season.

The same, to a degree, has been reflected in the new WWE product. There are a few additions to the roster, including Ken Kennedy and The Boogeyman. Unfortunately, however, some cards remained that stick out like Umaga’s wrapped thumb. 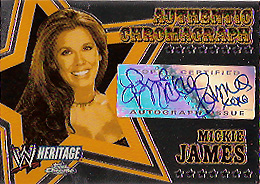 Take, for example, the inclusion of the Heart Throbs. Given the lead time needed for a product, I cannot completely fault Topps for not having the most “up to date” roster in the set; however, these two were not in any way, shape or form a presence in the Fed, and I can’t imagine how they would have been beneficial to the product in the first place.

So what then is the difference between the two products? Well, Chrome has a different physical build than the “regular” Heritage cards. The faces and backs are finished with a silver “mirror” effect and have a heavy coating (not one that would interfere with autographs, mind you). The result is a very different looking piece.

The question then becomes whether or not Chrome is worth picking up. Admittedly, some of the past Chrome products have not been as welcomed as their cardboard counterparts. In this case, however, the effects work very well, resulting in a spectacular look.

Additionally, Chrome introduces the wrestling world to Topps’s signature parallel sets –- Refractor, X-Fractor and Super Fractor. These cards have a “rainbow” effect and have been a hobby standard for over a decade, drawing approval year-in and year-out. The Super Fractors are also serially-numbered, another first for Topps wrestling.

Finally, Topps offers up some autographed cards for collectors to chase. These cards, like the Event-Used cards from Heritage, are extremely attractive and offer signatures from some of the premier performers in the Fed. Some, like Mickie James, don’t just offer their John or Jane Hancock, but include extra bits that are big attractions for collectors. 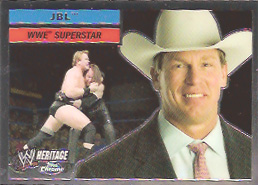 As odd as it will probably sound, I am thankful that there are no Event-Used pieces in Chrome. The shirt swatches last time ’round were very disappointing. Hopefully Topps is using this time to go back to the drawing board and come up with some new ideas (how about event-used ring boots?).

Overall, Chrome is a pretty good buy if you can overlook some of the base set problems. As a first foray into some of the higher-technology cards for Topps wrestling, it works well enough to get collectors moving.

What you can pull