Jacques Rougeau Jr., the former tag team and intercontinental champion of the old World Wrestling Federation recently had his third of a series of four wrestling cards planned for this year in St Hyacinthe, Quebec with his Lutte Internationalle 2000 federation.

This series of shows best exemplifies the “giving back to the fans” attitude of the former champion as a portion of the profits for each card was given back to a local charity or sports association. 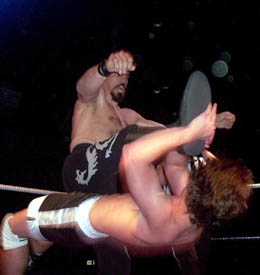 Since his departure from an active wrestling career, Rougeau has been busy developing many of Quebec’s top talents, whether still in his wrestling school, or wrestling throughout the world. But his most recent crop of prospects has been defined by many as some of the best he’s ever had in his school. With the help of Eric Mastrocola, Rougeau teaches the youngsters three days a week and many of them have made huge strides in the last year.

But the best way to showcase this new crop of talent is to have shows. The latest cards are in smaller venues, although, crowds of upwards of 1,200 have been seen, and the last show of the series, in Crabtree, Quebec, just outside of Joliette, has already been a sellout for the last three weeks, a full month before the show on June 3rd. SLAM! Wrestling was present last Saturday, May 20th, for the show in St-Hyacinthe, with a very noisy crowd of over 800. Rougeau and Co. put on a show deserving of all accolades that could be handed out.

The show got under way with Mike Skills, and his wad of money, trying to buy the crowd against a very agile Du Rag James with James getting the pin after Skills trying to duplicate many of today’s top stars’ signature moves to get the crowd on his side, but to no avail.

Taloche the Clown and Bad Dog then wrestled a semi comedic match, with Bad Dog taking the win. This is the same Bad Dog who was featured on a French television show about the effect going to Rougeau’s wrestling school had on his behavior and how it got him out of a certain delinquent future.

Just before the intermission, the crowd was treated to the first of two tag team matches between American Uncle Paul and Iranian Prince Ahmed against a solid team of the Valentine brothers, Velvet and Silver. This match was certainly one of the best matches of the evening with many technical moves as well as aerial tactics and with Silver Valentine’s charisma and the crowd constantly behind them, the Valentine brothers got the pin to the crowd’s delight.

Rougeau always try to give equal opportunity to all his students, and this is why a battle royale is a given on any of his cards so all his students, new or old, can have their moment in the ring, and this was no exception, with the surprise of adding a former Montreal Canadien to the match, Dave Morrissette, who recently wrote a book about his career and the danger of steroids to get to the top, something Rougeau is vehemently against. To the surprise of all, Morrissette won the battle, probably due to his excellent shape, even after being out of pro hockey for a few years.

It was then time for the grand finale of the evening, involving Jacques Rougeau, and his son, 17-year-old J.J., against Eric Mastrocola, who has had a dark match on Monday night Raw and his partner, former WWF superstar, 7’2″ giant Kurrgan. This long-awaited match started off slowly, with Kurrgan and Mastrocola taunting the crowd and telling them to be quiet so Kurrgan could explain his version of the final destruction of the fourth generation wrestler J.J.

But before he could finish his speech, drowned out by the noisy crowd trying to shut them up, J.J. and Jacques made their entrance to the huge roar of the crowd. The match was a long, grueling affair with Kurrgan not letting J.J. tag his father and putting the young wrestler to a test of his endurance, and often taunting Jacques by lifting up J.J.’s shoulders before the three count. After what seemed like an eternity, J.J. finally tagged Jacques only to see Jacques set up his son for a 450 splash on the giant for the win and the crowd’s euphoric screams.

Once the show was over, all the stars came out for an autograph session, their own way of thanking the fans for their support. Even Kurrgan came out and made many fans ecstatic with an autograph and scaring many other younger ones with his sheer size.

Kurrgan told SLAM! Wrestling that he had developed his friendship with Jacques while on the WWF roster together. “I think what Jacques is doing is great for the community, and I have always respected Jacques for his giving attitude towards the students,” said the New Brunswick native, adding that he feels home in Quebec too. “Whenever I come here, I feel I never left home as the fans are not only knowledgeable, but very respective of old time wrestling.” 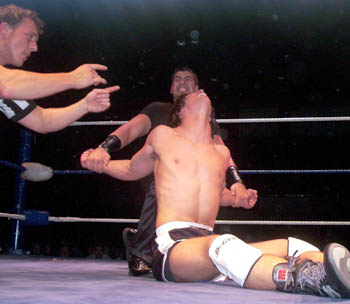 This series of matches has been the most successful for Rougeau, and this can only be good news for his students and Quebec wrestling. Rougeau has been in negotiation with a television network to have a weekly show, but this is still in its early stage although Rougeau feels it’s only a matter of time before the affair gets final approval and gets on the TV screens by September. There is also talk of running a larger venue, like a curtained-off Bell Centre in Montreal, in the fall.