AMSTERDAM, NY – One man can save an evening, especially if he is as broad of shoulder and humble of personality as the newest member of the Pro Wrestling Hall of Fame, Don Leo Jonathan.

To use a nautical metaphor — very apt for those familiar with the history of Jonathan and his many years as a deep sea diver and inventor — he saved a ship that was sinking (or at least taking on water). 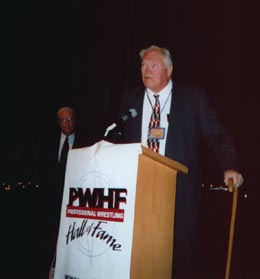 Don Leo Jonathan gives his induction speech on Saturday, May 20, 2006 during the Pro Wrestling Hall of Fame banquet in Amsterdam, NY. Photo by Greg Oliver

Forced to move by the closing of the planned venue, the Pro Wrestling Hall of Fame inducted its fifth class at the St. Mary’s Catholic High School in Amsterdam, New York on Saturday night. Crippled by some poor acoustics and shunned by the three other living inductees (Ric Flair, Bobby Heenan and Pat Patterson for his tag team with the late Ray Stevens), the PWHF crew did its best to put on a brave face.

But it was the ultra-sincere Jonathan who finally put smiles on the faces of the 300-plus in attendance at the banquet dinner.

After slowly making his way to the podium with the use of a cane, the still-monstrous Jonathan was grinning from mutton chop to mutton chop as he accepted his induction plaque to the Television Era category, and his induction ring.

Unfortunately, much of the rest of the induction evening was a little forgettable. Not having the actual inductee in attendance made the night a little dry, with the folks doing the honoring often putting themselves over or telling their own stories rather than the story of the person being inducted.

For example, The Destroyer (Dick Beyer), is a great character and person and a lot of fun. However, when given free reign on a microphone, it seemed it was more promo than induction. The Destroyer first talked about Pioneer Era champ Ed Don George, whom broke Beyer into the business, but riffed on other inductees like Ray Stevens, Ric Flair and Bobby Heenan. With little real pomp and circumstance, Beyer was next talking about International inductee Rikidozan, whom he worked against many times, including one match seen by 70 million fans on Japanese TV.

Following Beyer was last-minute call-up JJ Dillon, who had already inducted Flair into the Modern Era category. Dillon talked about Television Era inductee Johnny Valentine, whom he praised for his “believability.” (Dillon also admitted he was president of a Valentine fan club at one point.) Yet all along, it was Johnny’s son, Greg “The Hammer” Valentine, who was supposed to accept the award on behalf of his father. Instead, The Hammer apparently took a last-minute booking at a sports card show in Detroit.

Other families did not think so little of the Pro Wrestling Hall of Fame’s induction of their lost loved ones.

Dick Longson and his family were in attendance on behalf of “Wild” Bill Longson, who went in for the Pioneer Era category. “[Dad] would be so honored to know he’s going into the Pro Wrestling Hall of Fame,” said Dick Longson.

Taking the Women’s Category award for her aunt, June Byers, Ruby McKnight of Houston, talked about what a competitive, loving person Byers was, and there “there are a lot of stories out there that aren’t true” about her.

Reading a lengthy prepared speech, McKnight admitted to being a little nervous, but revealed the most about any of the posthumous honorees — her nickname “June” came from a fascination with june bugs, she was a pilot, and that a Coke bottle hurled by a fan caused Byers to develop “fourvision”, which led to a car crash that ended her career.

By comparison, Fabulous Moolah’s induction of Pat Patterson for his team with Ray Stevens was about two minutes long. “There are a lot of things I should say about Pat that I’m not going to say now,” she said.

The Master of Ceremonies for the evening, Nick Bockwinkel, talked about Non-Participant inductee Bobby Heenan and Ray Stevens for the Modern Division. Because he was also the host, the flow never changed and the inductions lost a little lustre.

Beginning the evening was Dillon inducting Flair. Dillon praised both Flair’s in-ring mastery — “every night he went out and gave everything he had” — and his post-match lifestyle, admitting that he spent “many a night killing brain cells” with Flair.

Standing out in the middle of the ceremony was Ida Mae Martinez Selenkow, who had a 10-year wrestling career before working as a nurse for 30 years and becoming a well-known yodeller. Martinez received the first PWHF Senator Hugh T. Farley Award for her contributions to both wrestling and society. After an acceptance speech worthy of anything Hollywood dishes out (for good and for bad), Martinez gave a yodelling exhibition.

The Pro Wrestling Hall of Fame weekend itself was a sellout, with lengthy lines and bustling crowds at the Saturday merchandise and autograph session, and meet and greet.