Not too many wrestling stars today will reference Pauline Kael, Larry Csonka and AM radio in the same interview. But then again, Raven is hardly your average 23-year-old rising star in TNA. He’s a veteran through and through, and has a lot on his mind.

After 18 years, he’s quite comfortable with the idea that he is married to professional wrestling, and like any marriage, there are times he loves his wife, times he hates her; but she is still his best friend, his biggest addiction, providing the biggest highs.

“I’ve taken every drug and there’s nothing that beats the high of having the people in the palm of your hand in a match, and manipulating them emotionally, pulling all their strings, making them go up and down when you want them to,” admitted Raven (real name Scott Levy) during a TNA/Spike TV conference call Tuesday. 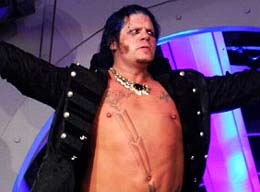 Part of his goal in this latest go-round with TNA is to share his knowledge of the business, to help those 23-year-olds on the roster learn to do more than high spots. “If they’re enjoying it now, they’re going to understand that there’s so much more than you can get out of it,” Raven said.

Just like he bugged The Grappler (Len Denton) constantly in Portland when he first started wrestling, the 41-year-old Levy finds himself tutoring a bit to those who are receptive; but he admits he’s not the best teacher. “I have a tendency to be very to-the-point,” he said. “As I learn to change my ways of teaching, I think people are beginning to listen more and more to what I have to say.”

Again and again, Raven brought up the reigning X Division champion Samoa Joe as being part of the future of the business. He also took a few “heavy” shots at him.

“I’m a big fan of Samoa Joe, but my only problem with him is that he’s so fat, the gravitational pull is going to cause California to sink into the ocean, because of his obesity,” joked Raven.

Later, while discussing the role of veterans working with young wrestlers, Samoa Joe came up again. “Let’s face it, other than the little bit he did with Mick Foley, he’s never worked with anybody except guys at his own level. Of course, the easiest way to learn it to work with guys who are better than you, and the hardest way to learn is to only work with guys who have only had a year or two experience like you’ve had. The fact that Joe is as good as he is considering he never worked with anybody … I’m just amazed at what he does.”

Like finding the perfect frequency on an AM dial, Raven sees TNA’s move to Spike TV on Thursdays at 11 p.m. ET as a good move. “They wanted us to let us build instead of going out there in primetime and possibly not scoring like we need to. Plus, they gave us a great lead in with Ultimate Fighter,” he said.

Up next is finding that cultural touchstone, the piece to gets wrestling into Rolling Stone magazine again. “I think we’re hitting all the elements,” Raven said. “I think we have action, we have veterans, we have young guys. I think we have a little bit of everything. I think it’s actually a really good mix.”

The next challenge to TNA isn’t WWE, but the WWE re-launch of the ECW product. It will compete for many of the 1,000 to 5,000-seat arenas that dot the landscape and are currently run by successful promotions like TNA and Ring of Honor.

Raven is all for the fight, having done lots of that in the old ECW. “It is going to be interesting because, let’s face it WWE, is very staid and very dull,” Levy commented. “From what I’m to understand, they were pulled kicking and screaming into the Steve Austin era. I think the best thing for the business is if we really come on, and ECW comes on, and that’ll kick WWE into having to re-start their game, and once again it’s a dogfight. I think that’s the best thing for the business.”

To Raven, TNA and ECW will be going after much of the same market. “They’re going to have a hard time competing with us because I think that’s where we’re going. That’s exactly what we’re trying to do,” he explained. “Everything has been done, more or less, so you have to find new ways of doing it, you have to find new ways of making it look different.” The six-sided ring and the X Division are two things that definitely set TNA apart from WWE, he said.

If they are going to make the new ECW successful, the key will be using the old guys to establish it and a whole new group of people to revolutionize it. “It can’t be a nostalgia tour. It’s got to be Paul E. [Heyman] taking a whole bunch of new guys you’ve never heard of and putting together a whole bunch of new acts, and using the guys who were there before to get them over. Then creating a whole new revolution.”

The chances of the new ECW creating a revolution in the wrestling business the way the first one did is unlikely, but Raven acknowledged that the right man is at the helm. In Heyman, Raven sees a great booker who understands the business, and more importantly, understands the current styles and trends to be able to cater to the younger demographic.

“Paul E. keeps his finger on America’s pulse, as I try to do as well,” Raven said. “I think I will always be received as a hip, cool cutting edge character-at least I hope that.”

Having been away for 10 weeks for health reasons — Raven battled weight gain brought on by blood-sugar levels and a wonky thyroid — he’s back to feud with outgoing TNA commissioner Larry Zbyszko. Raven used the time off to get his head in order, watch a lot of TV and think about how to upgrade the act.

“The business has changed work-rate wise, and the stuff that I relied on four years ago — I may still throw a lot of that stuff in, because people like to see it — but I’ve added a zillion things to the repertoire. It’s a matter of upgrading and knowing that the times change,” he said, acknowledging the influence of TNA Impact’s lead-in program. “As Ultimate Fighting becomes bigger and bigger, I bet you’ll probably see a lot more holds and people working holds. Holds are phenomenal. I’ve seen more bar fights end in a hold — not a rest hold, but a hold, just some guy trying to choke out the other guy or something — than knockouts. People poo-poo on holds, but the reason they do is… they never used to be done with any degree of strain. People would just sit in a hold and it would be kind of dull. But if you’re working a hold and trying to choke somebody out, that’s very interesting when it’s done right. It’s very boring if it’s done poorly.”

It’s a little like Raven’s take on “hardcore”, which he considers to be a misused term. “Most people really don’t understand it, and it all gets lumped into one even category of hardcore. It really isn’t,” he said, explaining that a good hardcore match doesn’t have to be, “just a bunch of people hitting each other with dumb weapons.” The match has to be dramatic, and mean something.

The weapons-crazy maniacs have given hardcore a bad rap. It’s much like the famed late film critic Pauline Kael’s take on horror movies, which she dismissed out of hand, influencing many other critics, just because she was, “[a] little hoity-toity, and rather high on her horse.”

Raven sees some the same generalizations being made to X Division matches, which he thinks is wrong. A.J. Styles, Samoa Joe and Christopher Daniels may be fighting for the X Division belt, but it’s still a great match. “But you watch some of the guys, and they are all flippity floppity floopidly floo, they just jump around. So it gets lumped into one thing as well, just as equally,” Levy explained.

Some of the high-flyers are partly to blame for the generalization, Raven said. “High spots have become the new shortcut. Great, it’s an athletic shortcut — it’s much better shortcut than the rest holds when I was a kid — but it’s still a shortcut because people are very uncomfortable standing around doing nothing.”

Wrestling is about interacting with the audience. “The people can only see it, they can’t feel it. So if you don’t act like you’re hurt, why would they think you’re hurt? And if you don’t give them time to digest what happens, it all becomes a blur.”

Through his Secrets of the Ring series of DVDs for Ring of Honor to his influence in the TNA locker room, Raven hopes to bring it all back to what he was schooled on all those years ago. “A lot of young guys don’t even listen to the crowd, which is mind-boggling to me because that’s what it is about. It’s an inter-emotional sport. We do something, you react. We react to you reacting. You react to us reacting to you reacting. And so the snowball goes.”

BLAME CANADA
Back in September 2005, Raven dropped the NWA World title to Jeff Jarrett in Windsor, Ontario [Jarrett reclaims NWA World title]. It was a screw-job finish, marked by the heel turn of America’s Most Wanted. The incident has also further tweaked Raven’s feelings for all things Canadian.

On Sunday, at the TNA Sacrifice pay-per-view, he faces a member of Team Canada.

“I’ll be wrestling A1; we will be wrestling over a bottle of steak sauce. … Anybody who’s a filthy Canadian, I don’t like. We have been at war with Canada for years, especially (Scott) D’Amore because he’s obese, I hate fat people. That’s why I never liked Tommy Dreamer either. I will be beating up A1, then Zbyszko is dead,” Raven vowed.

Greg Oliver is the Producer for SLAM! Wrestling. As a huge sports fan, he’s probably one of the few on the conference call that got the reference to Larry Csonka and Mercury Morris. Anyone else out there in wrestling-land know who they are? Just curious.