TORONTO – Though NWA Heavyweight Champion Christian Cage is from the Toronto area, it’s rare he gets the chance to perform here. This weekend, though, the champ came home, appearing at a Blood, Sweat, and Ears show in Mississauga. 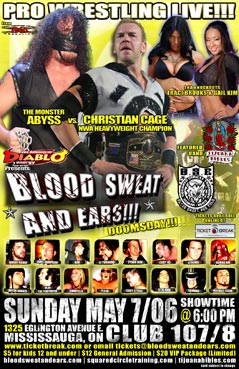 BSE has traditionally featured TNA stars on their cards, but judging from the volume of the 400+ fans in attendance, Cage’s appearance was the most highly anticipated to date. And he certainly didn’t disappoint, thrilling the crowd with a successful title defence against his TNA nemesis, the monster Abyss.

The match started off hot, with Cage attacking the big man, and the fight spilling into the crowd. Cage’s aggression was cranked to 11, whipping Abyss hard against steel barriers, smashing his head onto the metal cage (no pun intended) at the entrance rampway, and even using a fan’s crutch on his opponent. Back in the ring, though, Abyss used his brute force to take control.

He dominated the champion for a while, even hitting Captain Charisma with the dreaded Shock Treatment. Unfortunately for him, the referee, who had been previously flattened with an Abyss avalanche gone wrong, wasn’t available to count the fall. A second referee came in, but counted too slow for the monster’s liking, and received a chokeslam for his efforts. A thrilling series of close two counts, moves, reversals, and attempted belt shots ultimately ended when Christian managed to hit the Unprettier on the challenger and gain the pinfall victory. The closing sequence was PPV-caliber, as at any point, it looked like either man could earn the victory.

After the match, Cage thanked his hometown Canadian crowd for attending, and promised that he would return to BSE sometime down the road. As he celebrated, though, Abyss again stole the NWA Heavyweight Championship belt and headed back to the dressing room prize-in-hand.

Trent Powers and Phil Atlas defeated Anton Arakis and Michael Elgin in a good opener that saw some innovative tag team offense from both teams.

El Sombra and Angel De Guerra beat Flesh and Vlad the Penetrator in a decent match that surprisingly saw the villainous Vlad receive a large face reaction from the crowd.

Shawn Spears beat Frankie the Mobster in a hard-hitting affair.

Gail Kim made a victorious debut for BSE, as she and Tiana Ringer beat Shantelle Taylor and Traci Brooks. The win was tainted, though, as Danya Rays, acting as guest referee, helped Ringer’s team win in order to screw over Taylor, with whom both Rays and Ringer have had their conflicts.

Bobby Roode beat James Champagne by DQ. TNT attacked Roode just as he was about to submit Champagne in a Canadian Crab. Twisted Steele made the save, no doubt leading to a 6-man tag team match down the road.

BSE’s next show in Mississauga is on July 9th when the Phenomenal A.J. Styles appears.

Next month, BSE goes on the road to Timmins Ontario, in a card featuring Tommy Dreamer and Chris Kanyon.