Sam Steamboat was a Hawaiian legend

Beach boy, surfer, wrestler, teacher. These words and many more are used to describe Sam Steamboat, who died Tuesday, at 71 years old in his native Hawaii from complications due to Alzheimer’s disease.

Easily one of the greatest wrestlers ever to come out of Hawaii, Steamboat was a main eventer in the mid-to-late ’50s until the 1970s, when he stopped life as a grappler. 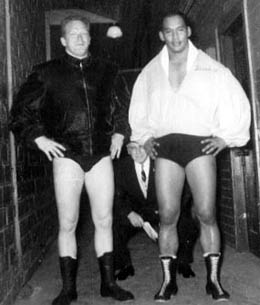 Like Richard Blood, aka Ricky “The Dragon” Steamboat, who inherited his name and legacy, Sammy Steamboat was a perennial good guy.

It wasn’t an act.

“The fans loved him. He was straight-laced. He was very sincere about his work,” recalled Danny Miller, who teamed with Steamboat in Florida in the late 1960s.

“He was a nice person, very quiet and very shy. He really was, about meeting people,” said Lord James Blears, who was instrumental in getting Steamboat started in wrestling.

Born Sam Mokuahi (which translates to “steamboat”), he was a multi-sport athlete at Roosevelt High in Honolulu. His father, Sam Steamboat Sr. (“Big Boat”), was one of the first to offer canoe and surfboard rentals on the famed Waikiki Beach. “His family was on the frontlines,” said Don Muraco. “Steamboat Sr. was one of the original beach boys.”

The Destroyer Dick Beyer recalled the same thing. “Sammy’s father was the king of the beach boys, really,” he said. “When I’d go down to the beach, I couldn’t do anything wrong because Sammy Steamboat’s father — you do something for the Hawaiians, they’ll bend over backwards to repay the favor. I had great times in Hawaii.”

Lord Blears stakes the claim of getting Steamboat into the grappling game, just as he would later for King Curtis Iaukea. “I started him wrestling. He was on Waikiki beach, he was a beach boy, but he had a terrific body on him, worked out surfing every day,” said Blears, from his nursing home bed. “I said, ‘I’ll teach you to wrestle if you teach me how to surf.’ So he said, ‘okay.’ We went out every day on the board and he taught me how to surf, and we went down to the gym, and I taught him how to wrestle.”

The young Steamboat would work out with the wrestlers in town, who loved the territory – weekly pay for working only a day or two each week. Among his early trainers and workout partners were Blears, Gene Kiniski, Sandor Kovacs, Don Curtis (Don Beitelman), and Tony Morelli.

“He used to have a neck like a goddamn goose, and we used to work on his neck at the beach every day. Finally, we got his neck worked it up like it should be,” said Kiniski with a laugh.

In February 2000, Iaukea shared his recollection of Steamboat with a Hawaiian newspaper. “He was the best looking man I’ve ever seen walk across the sand of Waikiki. And now he’s horrible looking — he got two cauliflower ears that look like two okoles sticking out of each side of his head, and not a hair on top of his head.”

By the mid-’50s, Steamboat was a pro wrestler, and claimed the NWA Hawaii tag titles with Billy Varga on August 5, 1956, defeating Tosh Togo and Ed Gardenia in Honolulu. He would soon hit the road, and in 1959, he made his way to the Toronto territory.

The Whip newsletter, dedicated to Whipper Billy Watson, had a feature on Steamboat in its September 1960 edition. “Sam is one of the most colourful wrestlers in the ring today and is also a fan favourite where ever he wrestlers. Why is he a fan favourite? Mainly because his fans know when he enters the ring, he possesses everything a wrestler should have, is fast as lightning, and prefers the clean scientific style of wrestling. However if an opponent is rough and rugged, Sam is always equal to the occasion as many have found out.”

“I used to say to him, ‘You’ve got the wrong godamn teacher. He taught you how to wrestle but he’s goddamn left-handed!'” laughed Beyer. “Lou Thesz had a lot to do with training him. Lou Thesz, he loved to go to Hawaii too. He was good friends with Sammy’s father.”

In Florida, Steamboat aligned himself on the side of local hero Eddie Graham, and headlined countless cards. He became such an icon in the state that when a young Richard Blood started out, he was dubbed Steamboat’s nephew Ricky. “The Steamboat name did obviously derive from Sam. But Eddie Graham and Jack Brisco when I went to Florida after I left Minneapolis, Eddie Graham gave me the name,” Steamboat told writer Jimmy VanderLinden. He quickly made it up the ranks in Florida. “And it wasn’t because of my work, it was only because of Sam Steamboat.”

In the latter ’60s and ’70s, Sam Steamboat came home to Hawaii. As the local promotion faded out, he drifted into coaching paddling.

Steamboat and Iaukea were the two local legends that he could turn to for inspiration. “He was a good, solid worker. He was a good draw around here and most of the places he went. He spent a lot of time with Eddie Graham and Lou Thesz,” said Muraco. “He was a good guy, quiet, dedicated to the community. He did a lot of work with canoe clubs in his community after wrestling. He didn’t have much to do with wrestling after he finished up here.”

Steamboat’s passion became outrigger canoe paddling, and he coached a number of clubs, including the Outrigger, Hui Nalu and Waikiki Surf Club. His hard work promoting canoe paddling led to the sport becoming a sanctioned high school sport in Hawaii in 2000.

A memorial service is scheduled for May 20 at Maunalua Bay.

Dick Beyer, for one, is trying to figure out a way to get there for the celebration of Steamboat’s life. He and his wife Wilma visited Steamboat and his wife Sheryll two years ago. “He was just at the start of Alzheimer’s,” said Beyer. At dinner, Beyer said that he asked Steamboat to be his “funeral director”, as he wants to be buried in Hawaii, where the custom is to scatter the ashes in the ocean, and family members ride a wave in to shore.