The stories of Kay Noble, in and out of the ring, flowed like water over the weekend as her life was celebrated by friends and opponents.

Noble, who died Thursday, April 27, 2006, in Amarillo, Texas at age 65 from gastric cancer, will be buried Monday.

But this story isn’t about the sadness of death, it is about the richness of a life. 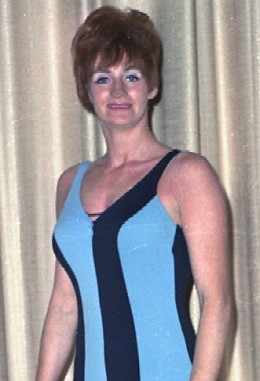 Marie Laverne was one of Kay Noble’s best friends over the last number of years in Amarillo, but they weren’t close when they were wrestling against each other. They grew so close, in fact, that Laverne was able to convince Kay to come out of retirement for two final matches.

Laverne and Noble had both been retired four years or so and were fast approaching the age of 50. Marie’s son, Steve Nelson, was a high school wrestling coach and wanted to raise some money for uniforms. He thought a fundraiser with some of the old wrestlers would work, and wanted women on the card. The only women around Amarillo were Kay and Marie. “He said, ‘Mom, I don’t think they want to see old women.’ I said, ‘That’s up to you,'” laughed Laverne. A couple of days later, Steve came around to the idea, and Marie said to book them. Up next, she had to convince Kay.

“Yes, but wouldn’t you like to wrestle again? Steve gets to get money for uniforms for the wrestlers and stuff. He’s trying to get people to donate their time.”

“Okay, you can tell Steve.”

It ended up being quite the battle. Initially, Laverne was going to take it easy on Noble, but soon it was on. “We were in a fight, going all over the place, and they disqualified us,” said Laverne. “That’s when I found out she was really hurt.” It turns out that Kay had broken a bone in her foot. Together, Laverne and Noble went to the hospital that night. “That was the last match, and I think it was the match that sold the night,” she remembered. “Steve was thrilled. The people went nuts when they saw us. I said, ‘See, you don’t have to be young, Steve.'”

It wasn’t the last time Laverne and Noble went to hospital together, and Marie was as much a part of the family over the past few months as anyone.

After Kay’s surgery, where doctors opened up her stomach and discovered how severe the cancer was, a note was placed on the door instructing only family to be allowed in. Despite being considered as close as sisters, Laverne respected the note and stayed at home. “She called me later that evening. She said, ‘Where are you?’ I said, ‘I’m at the house. You’re talking to me.’ She said, ‘That note on that door does not mean you, because I want you up here.'”

Another old foe in the ring, Jean Antone, called Kay every day after learning that the stomach cancer was inoperable.

“I used to get so tickled,” explained Jean Antone. “She had the red hair, and she would look just like Lucille Ball. As they’re raising her hand after she’s beaten me half to death, I look at her, and she looks just like Phyllis Diller – you know how Phyllis’ hair went in every direction.”

Antone went on to explain how Noble was very particular about her looks. “She had to be perfect,” Antone said, launching into a story. “One day, we both had to leave Kansas City to go to Omaha, Nebraska. Kay was very vain, and we were too hungover to fix her hair and everything. Me, I didn’t care; I just put mine in rollers. But she put herself on a wig. She gets on the bus, gets her a seat by herself, lays back with her head on the armrest and she’s just getting settled in. Some little old woman comes down the aisle with a purse hanging on her arm. As she goes by Kay, that purse took Kay’s wig and flipped it straight over in front of her face. I tell you, I laughed till I cried. But you’d have to know Kay to know what her expressions were. It was priceless.”

On many occasions, Barbara Baker teamed with her husband Ripper Collins to face Kay Noble and her first husband Doug Gilbert. “She was light and fast,” recalled Baker. “I remember she invited me and my husband over for dinner one day. She was young — we were all young then. And she had a baby and was trying to fix dinner. She was serving fish, and she put it in frozen and it came out frozen! I remember that. Isn’t that weird that it stuck with me that long?”

Betty Nicoli wrestled against Noble and teamed with her as well. “I admired her work. I thought she was one of the best girl wrestlers. In fact, some of the stuff she did in the ring, I stole!” Nicoli said with a hearty laugh. “Kay was just a flier in the ring. She could fly, like Jimmy Snuka. I admired her. She was always in the air. The only way to get her was to snatch her hair and get her out of the air, grab her by the hair and pull her down, because she was tall and I’m short. You either got her at the beginning or you had no chance with her.”

In fact, Noble’s height — a heady 5-foot-7 — resulted in one of the most frequently recounted tales. Teaming with Jack Cain to take on Jean Antone and Terry Funk in a mixed tag match, Kay was forced to think fast. “I jump up on Terry’s back. Jack Cain looks at Kay, Kay looks at Jack Cain. Kay bends over and Jack gets right up on Kay’s shoulders because she was a head taller than him anyway!” laughed Antone.

Another time, same match-up: “Kay was not one to be outdone. We chased them out the back door of that arena. When we rounded the corner, there was Jack with a big, ol’ 2×4. I’m thinking, ‘Oh my God, what is this woman going to come at me with?’ Then she rounded that corner with a little-bitty, long stick yelling ‘hey ya!’ That was the funniest thing.” 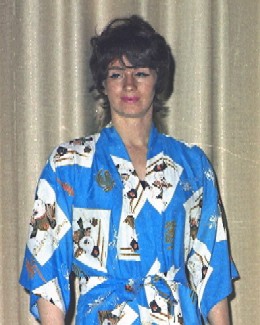 On a more personal level, Antone talked about Kay’s love of playing the piano, and whenever Jean found one in the arena, she’d inform Kay. “I knew Katie was going to go over there and play How Great Thou Art. She could play that beautiful. She always played it.” Noble was also known to pluck away at a guitar.

Laverne and Noble shared a love of dogs, and Marie gave Noble a German shepherd named Gunner. Kay and Gunner became so close, that it was actually the dog’s behavior that prompted another visit to the doctor, where the stomach cancer was found.

“Honestly, that dog knew that woman was sick before we found out,” said Laverne.

Stories of Kay Noble’s toughness are legendary. According to Laverne, things weren’t much different in her final days. “If anybody could go as Kay did, with as bad a cancer as she had, she did not complain. She did not complain or moan or groan that she hurt or anything,” Laverne said.

Kay Noble died about 7 p.m. that Thursday, surrounded by family, about an hour after her old friend and mixed tag partner Terry Funk had been to visit. On Monday, Funk will deliver the eulogy at Noble’s funeral, along with Steve Nelson, the son of Marie Laverne and Gordon Nelson.

Her third marriage was to Dick Bell, and took place on Nov. 25, 1985, in St. Joseph. After retiring from wrestling, Noble owned and operated Kay’s Upholstery located on southwest Sixth Street in Amarillo. She later worked in pediatrics at BSA, where she dedicated her later years to children. Survivors include her husband; four daughters, Theresa Lindzy of Omaha, Neb., Lynn Brollier of Dallas and Melody Flanagan and Teresa Gibson, both of Amarillo; five sons, Michael Lindzy of Louisville, Ky., Steven Lindzy of Omaha and Daniel Fortune, David Fortune and Joe Bell, all of Amarillo; a sister, Leota Thurman of St. Joseph; 20 grandchildren; and a great-granddaughter. The family suggests memorials be to BSA Hospice, P.O. Box 950, Amarillo, TX 79176.