Kay Noble, one of the greats of women’s wrestling from the 1950s to the early 1980s, lost her final battle — to inoperable stomach cancer. She died Thursday, April 27, 2006, at about 6 pm CT, in Amarillo, Texas, surrounded by friends and family. Earlier this year, her many friends in pro wrestling took the time to celebrate the great career of Kay, and recall her toughness.

Again and again in their recollections, Kay Noble is called one of the toughest females to ever step foot in the ring. Coming in at just 5-foot-7 and 132 pounds at the height of her career, the St. Joseph, Missouri-born Noble was able to look legit whether against the bigger girls or those smaller than her.

“See these muscles? They are muscles of an athlete, not an Amazon. They are long muscles, not short ones,” she’s quoted as saying in the May 1963 issue of Wrestling World. In the June 1962 edition of Wrestling Revue, Noble is described as having “the whipcord type of muscle rather than the bulky heft of some lady wrestlers. She looks more like a swimmer.” 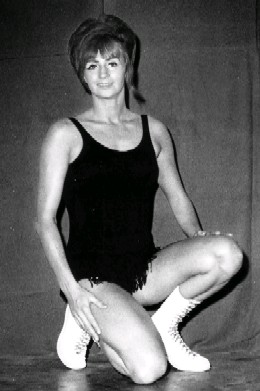 The auburn-haired Noble took her wrestling seriously and competed just as hard — if not harder — than the men.

“She could do anything that the men could do, and very, very real. She was great,” recalled Leo Burke, who worked as Tommy Martin when he was in Kansas City and got to know Noble best. Burke laughed deeply before launching into a story. “It was a mixed tag team match with me and her against [Betty] Nicoli and somebody … He started doing one-handed push-ups, so I went down and did the same thing. Then Kay Noble gets down and starts doing nip-ups! I’m kicking her to get up before they make me do it!”

Noble started wrestling in 1957 when she was just 18, after being approached by St. Joe promoter Gust Karras. She was trained by Laura Martinez and Sonny Myers.

“Kay Noble was a tremendous girl wrestler. She just absolutely was great. She didn’t back up from nothing. If she had a job to do, it was done,” said Myers, recalling how tough she was with a chuckle. “She didn’t take no shit from nobody.”

Later, she worked out with Ed Wiskoski in St. Joe, helping him break into the business. “I worked out with the midgets and a girl wrestler named Kay Noble, who could do shit men at that time would not attempt and she could really work,” said Wiskoski, who was later Colonel DeBeers.

Her career lasted, at least on a part-time basis while raising five children, until her last match in 1987 against Marie Laverne. Noble held both the Texas Women’s Championship and the Central States Women’s Championship. She wrestled across North America, and worked in Japan as well in the 1970s. The WFIA named her 1971’s Girl Wrestler of the Year.

On October 16, 1958, Lorraine Johnson, Penny Banner, Laura Martinez and Kay Noble were charged with “fighting outside the ring” in Amarillo, Texas. All four girls pleaded not guilty when they appeared before the judge.

It was one of the few fights, it seems, that Noble shied away from.

Tom Andrews recalled being in Omaha, working under a mask as The Claw. He broke his leg and couldn’t work, so the promoter had him manage Ox Baker. “They wanted to keep the heat on me when I was The Claw, so they brought Ox in and let me manage him while I was healing with this broken leg. I was out at ringside like a manager and — I forget the name of the town we were in, somewhere there in Nebraska — we really got the heat going,” said Andrews. “Ox jumped out of the ring and took off. I had these people swarming me, and of course, I’m on crutches. Kay Noble came out and saved me. I’m not kidding you. She came out. I did have a walker on my cast, and I could walk. Of course, I was swinging punches just like her. Boy, she led me back to the dressing room, just knocking guys on their butt.”

Bob Geigel knew Kay Noble on a couple of different levels. She worked as a bartender at Geigel’s bar (“She was a good bartender too. She wasn’t bashful.”), her was her employee when he was part-owner of All-Star Wrestling out of Kansas City, and he tagged up with her in mixed tag bouts on occasion.

One night in particular stood out for Geigel, though he couldn’t recall the place or their opponents — just the actions of his tag team partner Kay Noble. “I was in the ring and Kay Noble was on the apron. Some guy came up and grabbed her by the leg and pulled her off on the ground, which was a mistake on his part. Kay Noble tore him apart. I didn’t know she was gone. I looked, and said, ‘Where in the hell is she?’ I looked, and she’s out on the ground having a fight with this guy. She had the guy down on the ground. When she stood up, there was a big black lady who weighed about 240 pounds who had a Samsonite chair. She cracked Kay on top of the head with the chair. I jumped down from the ring. Kay said, ‘Let’s get the hell back in the ring before they beat the shit out of both of us!'”

“By the nineteen sixties, Kay really came into her own. Making Minneapolis her home base she ruled the field with victories over names of the day such as Annette Palmer and Mars Monroe,” Jim Melby wrote in a 1998 edition of LadySports magazine. “Another highlight was a torrid feud that she and her wrestling husband Doug Gilbert had with ‘Ripper’ Roy Collins and Barbara Baker, his better half. It was during this fabled series of mixed tag team contests that wrestling first became aware of the fact that Kay and Doug were married.”

Noble and Gilbert (Doug Lindzy) had three children together: Theresa, Michael and Steve. A second marriage produced Danny and David. Noble’s third — and current — marriage is to Dick Bell.

Wrestling Confidential profiled the Gilbert-Noble union in May 1964, in an article titled “I’m Glad I Married a Wrestler” by Don Hatfield. “A man like Doug offers the perfect combination … Being a wrestler, he’s big enough and rough enough to take care of me. Being a gentleman, he shows me more kindness than any man I’ve ever known. It’s not true that all male wrestlers are big, mean dopes. This one is as gentle as a lamb-with me, at least,” Noble is quoted as saying. The magazine reported that the two met in an elevator in Omaha before the matches that night, and that they were married in 1959. Initially, they tried to stay in same territory: Vancouver, Omaha, South Bend, Minneapolis. When they had kids, they settled in South Bend, Indiana and kept horses as well.

Her ability to stand up for herself was not confined to the ring, recalled her oldest son. “I watched her beat up a truck driver for touching her butt!” said Michael Lindzy, who thinks he was 16 years old at the time, and that it was in Missouri.

When Noble retired, she went into the pest control business and then into upholstery.

In 2001, the Cauliflower Alley Club honored Kay Noble as one of the legends of women’s pro wrestling, and she attended the 2005 reunion in Las Vegas as well.

In October, Noble was diagnosed with the fourth stage of stomach cancer. Chemotherapy and radiation treatments proved unsuccessful and doctors are unable to do anything further for the aggressive form of cancer.

Her son, Michael, reported that Kay received many, many calls from a variety of old friends, including Mae Young and Bob Orton Sr.. SLAM! Wrestling readers also shared some of their own memories with Kay as well, and their messages were forwarded to her well before her passing.

Her funeral is Monday, May 1st at Boxwell Brothers on Paramount St. in Amarillo, at 10 a.m.