This year, WrestleMania returns to Chicago’s Rosemont Horizon (now the Allstate Arena) after eight years. The last time the Windy City hosted the WWE’s annual pay-per-view extravaganza, 18,197 people were in attendance. One of those people was me.

I had bought the tickets for WrestleMania 13 in February when I was in Chicago for work. That day, I called my buddies who were back at home to see who else was interested in going. Two takers: Tim “Dracc” Drury and Jay Doyle (not sure why my best friend Jason Bardyla couldn’t make it, but whatever the reason, we mocked him unmercifully for years for not joining us). 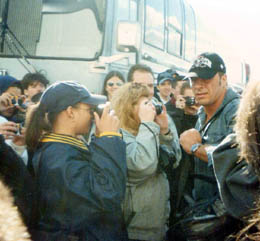 We started our journey (okay, sure, at only 350 miles between Chatham, Ontario and Rosemont, Illinois, it’s not quite a Tolkienian odyssey, but I’m telling the story, so I claim the right of creative license) early on Saturday morning. No problems going across the border. “Going to WrestleMania in Chicago,” we proudly boasted to the customs agent. He didn’t seem too impressed, with his caustic “Like that Hulk Hogan fake stuff?” response. But we soldiered on nonetheless.

We faced only one near-death experience during the drive, but like a dexterous cruiserweight, weaving and dodging clothesline and big boot attempts against larger opponents, I managed to avoid getting smashed by an out-of-control 18-wheeler, earning kudos from Dracc and Doyle. Other than that, the drive was uneventful.

Not having arranged for lodging in advance, we drove around the outskirts of town looking for a cheap motel. I guess the giant bloodstain on the carpet should have been an indication that this wasn’t exactly the Ritz, but the price was right and it was close to the arena. And anyway, no matter what Doyle says, that thing crawling on the bathroom floor couldn’t have possibly been a roach — they never grow that big.

Of course, the main event of our trip started on Sunday. After a traditional Chicago deep dish pizza lunch, we headed over to the Horizon. About a hundred people were there in the parking lot by the time we got there, all of them hoping to see their favourite wrestlers arrive. We were lucky and got to meet a lot of them, including Bret Hart, Ken Shamrock (who I was a big fan of from his UFC days — funny how much I couldn’t stand him as a wrestler, though), and Sunny (to Dracc’s credit, he nearly trampled over someone to try to get me her picture).

And then finally it was time for the show to begin. We settled into our “Bob Uecker” last-row-in-the-building seats, and watched as the spectacle unfolded in front of us… way, way, way in front of us.

For the most part, the card was pretty uneventful, with no match standing out as being particularly memorable. I liked the Godwinns, so was disappointed when they lost the four-team elimination tag match. Doyle was a huge Goldust fan, so was kind of bummed when he lost to Triple H. Otherwise, other than the fact that we were at a WrestleMania, things were kind of underwhelming.

Until, of course, the Bret “Hitman” Hart vs. “Stone Cold” Steve Austin match. Being true patriotic Canadians, we cheered crazily for the Hitman, screaming at him to vanquish the angry Texan rattlesnake. We weren’t the only ones, mind you — there were thousands of us in that arena rooting for Hart. But then something happened.

Slowly, the crowd began to turn. As the match progressed, people started booing the Hitman and cheering for Austin. Then, “Austin! Austin!” chants started breaking out. Scattered at first, by small pockets of people in the crowd. But soon they got louder, and more intense, and the pockets grew to entire rows, then sections, and ultimately, as the match drew to a close, they filled the air at the Rosemont Horizon.

It was unbelievable. I remember at one point, I turned and asked Dracc what the hell was going on — but he couldn’t explain it either. It was one of those rare magical moments in wrestling — the moment when whatever is going on in the ring becomes real. The moment when you climb aboard the story being told in the ring and hang on to that roller coaster for dear life. I’ve seen thousands of matches after that one, and I think it may have happened only a handful of times since. 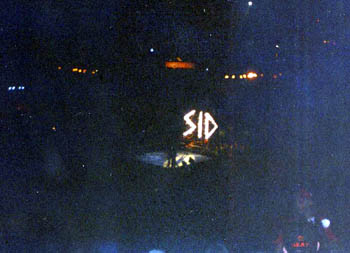 After that match, all three of us sort of burned out. The main event, which saw The Undertaker defeat Sid to win the world championship was good, but just couldn’t compete to what we’d seen earlier. Even Dracc, an Undertaker fan for life, wasn’t as excited about the Dead Man’s title run, emotionally exhausted from the Hart-Austin affair. Though that didn’t stop him from gloating over the fact that he won a bright shiny nickel off of me (last time I ever cheered for Sid, by the way).

The drive home on Monday was actually pretty uneventful. We talked about the event, of course, and polished off a sack of sliders from White Castle in Detroit, but beyond that, not much else to say.

I don’t know if WrestleMania 22 will produce as good a match as Hart-Austin, though I think it has the potential with a couple of the matches. But, you know, maybe when it comes down to it, that’s not really the point. Maybe the point is to get together with some friends, watch the show, good or bad, and just have fun with it. That’s what we did that weekend eight years ago. And, not to get all Wonder Years on you, but next Sunday, after WrestleMania goes off the air, I think I’m going to call up Dracc and Doyle, and Jason too, and ask them what they thought of the show.