When Gail Kim arrived at TNA she knew she wasn’t going to have a chance to become the women’s champion — because they don’t have a female division. But that hasn’t stopped her from advancing herself in the company and now she gets the most female face time on the show. 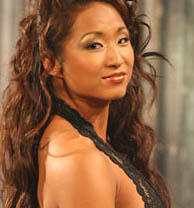 “I actually haven’t watched WWE in a while,” said Kim. “Once in a while I will tune in. I’m glad we can produce the alternative. I hope people can appreciate wrestling now instead of maybe the soap opera that they see on other products.”

She has built up some heat between herself and the ex-“Miss Jackie”, Jackie Gayda. There is a videotape and, if we all believe the storyline, then what’s on this tape could be very damaging to the federation.

“It’s funny, we’re not used to having these storylines being built up for so long. I love it. I agree with the way we are doing our show,” she said. “I’m glad people are interested in what’s going on right now. I’m interested.”

Kim is a very down-to-earth girl who is very career-oriented. She enjoys wrestling, but until they let her wrestle, she also enjoys being in front of the camera and its pretty clear that the camera loves her back.

“This topic frustrates me because I’m a wrestler,” she said in a tense-sounding voice. “I love wrestling… It just seems like right now women’s wrestling is at a stand still. But TNA is great. I truly do believe they want to move in that direction. Right now there are only three girls and right now we only have an hour of programming and we have a lot of guys. I’ll be patient. I would love for that to be now.”

Even though she is one of the best known women wrestlers on the planet, she is committed to TNA for as long as she is having fun. Playing an evil bitch alongside Jeff Jarrett and America’s Most Wanted is definitely fun. But do people ever stop her on the street and chastise her for her evil ways?

“Yeah, never actually,” she responded quickly. And after a laugh she added, “Okay maybe they are just scared of me. I don’t know.”

TNA will soon have some house shows, the first one will be in March in Detroit, Michigan. She was happy to hear about that. “I think its really great and I just heard about it recently too. It shows how much people are liking TNA. I believe in Korea, where I am from, I heard the ratings are better than the WWE.”

After being released by the WWE, Gail wrestled in Japan, but she didn’t plan on doing that long term.

“I just prefer, honestly to be home,” said Kim. “I filmed a little independent movie in December called Princess. I play my dream role, which is an assassin. For other opportunities, it’s hard for me to be overseas.”

Her main goal is to help and build up the company. And besides — she likes living down south. ” I love it. I grew up in Canada where it is very cold in the winter. I don’t miss it at all,” she said with a smile. “I have adjusted pretty quickly.”