There have been few more polarizing figures in the history of British pro wrestling than Jackie “Mr. TV” Pallo, who died Saturday at the age of 80. Worshipped and abhorred, there is no denying that he was one of the biggest names ever from the United Kingdom.

Born Jackie Gutteridge above the gym his father owned in Islington, London, he grew up around boxing with his father, Jack, grandfather and uncle all involved in the ring game. A show-off from an early age, he worked as a butcher and a mechanic, and was engaged to Trixie when he decided to stop training as an amateur wrestler and go pro with Dale Martin Promotions. 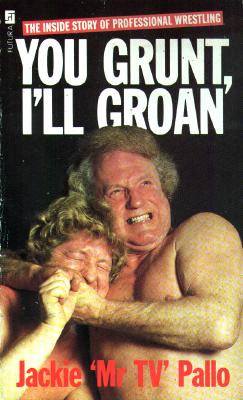 As Jackie Pallo, he was the right man at the right time as televised wrestling began in Britain. He wasn’t an especially big man, but he quickly adapted to the showmanship aspect of the game and became known for his striped shorts and gold boots.

“Pallo’s image is that of the ‘big-head,’ complete with flashy robes, conceited gestures and the like. Pallo’s drawing power has launched him a subsidiary career in show-business,” explained Graeme Kent in his Pictorial History of Wrestling.

He became a household name in Britain, thanks in large part to his ideal adversary, Mick McManus.

“My being such a starstruck wrestling fan wasn’t so unusual back then. All of Britain was hooked on it,” wrote William Regal in his autobiography. “They say that in the 1960s, a couple of matches between Mick McManus and Jackie Pallo, which were put on before the FA Cup final, the biggest sporting event of the British year, drew more viewers than the football — eleven or twelve million. That’s more than one fifth of the population.”

Pallo took advantage of the huge audience. “In one of their contests, Pallo, ever the showman, vaulted out of the ring after securing the first fall, in order to kiss his wife sitting at ringside,” wrote Kent.

In the book, The Wrestling, by Simon Garfield, a number of old British wrestlers gather at a reunion to discuss their careers.

“They used to go potty for us when I fought Mick. Why? Because we were both very good. You can’t beat quality,” Pallo told Garfield, claiming that he got the highest payday of his career for one of the pre-football game bouts, £80 — and that was only after bitching and moaning to the promoters.

Another great opponent was Bert Royal, and they fought over the British Heavy-Middleweight Championship, switching it back and forth in 1969.

The first TV show Pallo appeared on was Emergency Ward 10, when he was a wrestler that came in with a broken coccyx. Many other notable roles followed – his nickname was very apt. On The Avengers, he was a gravedigger that wrestled Honor Blackman. He was also on Are You Being Served?, This Is Your Life and in a couple of films: The Reckoning (1969) and Not Now Darling (1973).

The turning point in Pallo’s story, however, came with the publication of You Grunt, I’ll Groan: The Inside Story of Professional Wrestling, in 1985, from Queen Anne Press (and in paperback by Futura Publications). It was the first real expose of the wrestling business in Britain.

The promo material for the book says it all: “In a fascinating, often very funny, account of his 34 years in ‘the game’ as wrestler and promoter, he penetrates its Mafia-like secrecy to explain how bouts are faked; how real blood is shed-in highly ingenious ways-to satisfy the paying customers; how real fights are sometimes fought-outside the ring; how female Ring Rats cluster at promotions to prey on hapless wrestlers.”

“Half the stuff in You Grunt, I’ll Groan we had to cut out for legal reasons,” Pallo told The Wrestling‘s Simon Garfield. “People didn’t turn against me just because of that book, it was much earlier. … But I never damaged a wrestler with that book. I wrote it to get back at the promoters.”

His years of popularity and fame having faded, the book’s publication thrust him back into the spotlight and forever changed his colleagues’ opinion of him.

In The Wrestling, Garfield quotes numerous slaggings of Pallo:

He certainly never had trouble patting himself on the back, as The Wrestling records. “What did Jackie Pallo have that most wrestlers didn’t? Talent. Talent for a start. No one can knock me on that. The ability to do something on the spur of the moment and know what the public want. To make a little out of nothing.”

In the 1980s, Pallo decided to try promoting himself, but never stood a chance.

“[He] lost a lot of money,” Mick McManus told Garfield. “He was a terrible businessman. But I don’t mean that in a derogatory way: he was just bad at business.”

Jackie “Mr. TV” Pallo finally retired from active wrestling at the age of 58, having had his hip operated on. For many years, he competed alongside his son, Jackie Pallo Jr.

Pallo’s death at his home in Ramsgate, Kent after a long battle with cancer will result in deep-felt reactions on both sides of the fence. Those who loved him will mourn but rest easy knowing his pain has ended; those who disliked him may further denigrate his arrogance but they cannot deny his impact on British culture.