Samoa Joe well on his way

Fame is definitely coming to Samoa Joe: He is the TNA X Division champion with a clean bill of health; he’s about to be one of the stars of a Spike TV primetime show (if his contract gets renegotiated); he’s in a featured match on Sunday’s pay-per-view. And he’s being recognized more often to boot, most recently at a 7-11.

It’s with a chuckle that he revealed the last fact to journalists earlier this week on a conference call to hype TNA’s switch to Thursday nights at 9 p.m. ET on Spike starting April 13. The laughter is somewhat out of character for the vicious pounder that he portrays in the ring.

“I don’t think I’ll be mobbed anytime soon in Universal Studios,” deadpanned Samoa Joe. “I think the timeslot change will definitely expose us to a broader audience and I think a lot more people are going to tune into our show. But this is really not about being a celebrity to me. I got into this business as a business, and I got into it to go out there and wrestle and entertain people. I love what I do and I think pro wrestling is one of the finest martial arts in the world. I enjoy my craft, and I enjoy plying my craft. In TNA, I’ve had the ability to do that. If celebrity and fame come with that, then fantastic.” 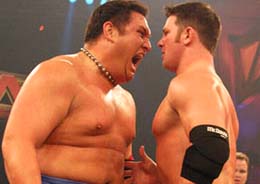 “People know what we’re capable of happening in that ring when the three of us manage to get in there,” he said. “You’ve got A.J. Styles who, I guess, is Mr. TNA, according to online polls and fans. You have Christopher Daniels, who claims he’s Mr. TNA. Then you have me, who just likes to go beat people up. It’s kind of a nice demographic that works between us three, and I think the fans are in store for something quite spectacular.”

At the last TNA PPV, January’s Final Resolution, Samoa Joe faced off with Christopher Daniels over the X Division title. The bout ended when Styles threw in the towel on Daniels’ behalf, who was seemingly beaten to an inch of his life by the vicious, unrelenting Samoan Submission Machine.

It was a unique finish to a match, admitted Joe. “It is kind of an abstract concept,” he said. “It’s something that doesn’t happen a lot in pro wrestling. But at the same time, I think people understand the primal violence. I think they understand that if the guy’s on the ground and he’s half-knocked out, he’s getting kicked in the face, kneed in the head, that at some point, there is a breaking point and somebody does need to stop it.”

He considers it all a part of re-educating the fans on how matches can go. “I think pro wrestling has to evolve from its current state and, instead of rehashing the old formula of what’s what, I think you have to put a new spin on things sometimes. That was what I felt was a new spin on how to finish a match. How well it was accepted in the general populace remains to be seen, but I’m not above continuing to experiment and try new things.”

The style he wrestles, however, comes at a price. “Anybody who’s ever seen me wrestle, seen what I do in the ring, it’s a very a physical style. I’m not very cute or pretty about things. I’m more of a, instead of a backflip on you, I’m just going to sock you in the face,” said Joe. “Unfortunately, a lot of my approach to wrestling is actually returned on me. How far can you go with it? My body is holding up fairly well. But at the same time, as you get old, and your career wears on, the things you didn’t feel before, you start to feel now. I’m very much in that realm now.”

Recently sidelined by a staph infection, Samoa Joe assured everyone that he’s ready to go. “I’m actually 100%. I went and got checked out by the doctor the other day and he gave me a clean bill of health. I should be healthy and ready to go for the pay-per-view.”

Less than 100%, though, is his contract status with TNA. He’s in the process of renegotiating a deal to boost his pay.

“[We] are currently still in the process of hammering out the details, but I’m sure that we will come to a conclusion very soon,” he said. “I’m confident TNA is going to come to the table and put out a good offer and we’re going to come to a satisfactory solution.”

Should things get worked out to the satisfaction of both parties, many observers expect Samoa Joe to be pushed even further up the TNA card and into the world title picture.

“It’s hard to say that now is the time. I’m the current X Division champion. My focus is basically at the task at hand,” said Joe. “I will say this — I’m quite sure that in the very near future, that type of scenario will take place. It’ll be very interesting when it does.”

THE HOCKEY PUNCHING GAME
Samoa Joe shared details of a behind-the-scenes game played by TNA wrestlers. Do not try this at your office.

“It’s a silly game that actually started in TNA long before I ever got there. I just happened to get included into the fold. It’s called the Hockey Punching Game. The rules are very simple. It involves waiting for your wary victim to stand quite dumbfounded and unaware of the surroundings around him, and then walking up and jabbing him in the jaw — not in a real attempt to hurt, but more along the lines of embarrassment and possibly wobbling a knee or two.”

He singled out David Young as having a tough go of it. “David’s having a hard time with the game because he’s losing horribly,” said Joe. “I expect full reprisal at some point, but we’ll be ready.”