David Sammartino lets it all out in shoot

For the curious wrestling fan, shoot interviews are the perfect supplement to their wrestling craving. K and S Promotions’ latest release, a David Sammartino Shoot Interview, is a provocative look at the old school days of wrestling and the struggle of one man to break free from his father’s chains.

Ken Pulvidente and Steve Muraglio (K and S Promotions), first appeared on the scene to promote their Wrestlefest 2005 event in September. Having conducted shoots with the likes of Maven, Kid Kash and Trinity, K and S Promotions have developed the right formula for concocting an enjoyable shoot. 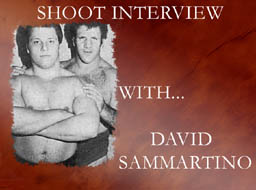 David Sammartino’s interview clocks in at a whopping three discs, well worth the 20 bucks (plus shipping). The first two hours of the set focus mainly on the Sammartino family, and what it was like having Bruno for a father. “Anything my dad would tell me to do, I would,” he comments at one point. “If he told me to kill a man, I would have done it.”

The younger Sammartino faced many hurdles following his legendary father into the ring, and comments on his Bruno Sammartino Jr. gimmick: “That was all my father’s idea, I didn’t like it. People started calling me ‘Jr.’ and nobody likes to be called Jr.”

The proverbial black sheep of the family, David admits that he rarely talks to his mother or father and alludes to the fact that he doesn’t regularly speak with his siblings.

He doesn’t avoid the hot topics of the day, either. “[Bruno] knew I was on steroids. I told my dad I smoked marijuana.”

As the shoot progressed, things really took shape. Sammartino told a story of how he was in a huge bar fight that nearly got him one year in jail and a fine. However, Bruno and the bar owner saved him from certain doom. It was interesting to hear how certain promoters treated him as a result of the fight, especially when it came time to swap wrestlers around to different territories.

Other wrestlers and bookers weren’t as sympathetic to his plight. “I told Ole (Anderson) that I needed to stay, because I had to go to court anyway. He told me ‘I don’t want to hear about your personal problems.’ I practically had to beg him,” he says.

Sammartino continued on, describing in depth how each territory was. One thing you can’t complain about is Sammartino’s detail. Almost to the exact moment, Sammartino chronicles the highs and lows of his career, not afraid to use some colorful language towards a few people along the way.

From start to finish, this Shoot will keep you captivated. Sammartino’s enthusiasm comes across rock solid, and helps to keep you interested and attentive. It doesn’t matter what anyone has said about the Sammartino family, this shoot puts any rumors to rest and gives you the scoop straight.