Whether his rivals were wrestling legends like Lou Thesz or anti-union businessmen, “Dirty” Don Evans took on all comers. And he didn’t mind busting a few chops in the process. 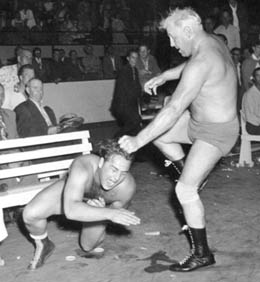 Donald A. Evans, whose career spanned parts of four decades, died Nov. 28 at a nursing home in Oswego, N.Y. He was 88.

A native of South Kortright, N.Y., the hard-nosed brawler wrestled from the 1930s to the 1960s, and gave some of wrestling’s most famous champions a run for their money.

In fact, Evans’ son recalled that champion provided his father with an unusual introduction to the sport during his training days.

“He was down in New York City, and they had come from the farm up in South Kortright, and he was thinking about wrestling. So he worked out, and got out of the ring one day, and there was an older man standing there. My dad said, ‘Hey, old timer, you want to get in the ring and work out a little bit? I’ll take it easy on you.’

“They got in the ring and my father made one move, and the next thing you know, he was looking at the ceiling. The old gentleman introduced himself. He said, ‘My name is Ed (Strangler) Lewis.’ He didn’t look like a man that was athletic. But Ed (Strangler) Lewis was one of the finest wrestlers in the world,” Evans’ son chuckled.

Undeterred, Evans joined the pro ranks in the late 1930s. By then, he was battling the likes of Nanjo Singh, Bill Longson, and Frank Sexton, establishing himself as a tough opponent for the mat game’s top echelon.

He crisscrossed North America during his career, with long stints in Ontario, Texas and metropolitan New York. In 1941, at the original Sportatorium in Dallas, he was part of matches against Ted Cox and Bobby Managoff that were broadcast live on local radio.

Marathon bouts were not usual, either — Evans’ son remembered a contest against Bill Longson, a frequent opponent in the late 1930s and early 1940s, that went more than three hours without a fall.

“I saw many matches that were 120 minutes. Maybe there was a fall, maybe there wasn’t. But my father was in fantastic shape, wrestling six nights a week,” Evans said.

Always wrestling as a tough guy, Evans had world championship title shots against Don Eagle, Orville Brown, Sexton, and Thesz, among others. He held a pair of championships during his swings through Texas, winning the state’s tag team title with Duke Keomuka in 1954, and swapping the Texas Brass Knuckles title with Wild Bull Curry in March 1956.

In Texas, as elsewhere, Evans was known for being a “hardcore” wrestler before the term was even in vogue. A series of matches with the original Rip Rogers included a brawl in Amarillo that went “120 minutes with about 120 pints of blood going all over the place,” his son remembered with a laugh.

Against Curry in Galveston, “They spent the first two minutes in the ring. The other 30 minutes, they spent around the arena, including chairs they had up above in the building. They were all the way up to the top and all the way back down to the bottom. It was some kind of sight.”

Evans was a fixture in northern Ontario in the 1950s, where he worked for Larry Kasaboski as Don “One Man Gang” Evans. Evans had his share of bloodbaths with Kasaboski, and also worked high-level programs against Dory Funk Sr. and Gorgeous George Grant.

Northern Ontario wrestling historian Gary Howard recalled that the ring collapsed during a 1955 match in Pembroke that featured Maurice “Mad Dog” Vachon, Joe McCarthy, Funk, and Evans, leaving all four up to their ankles in ring posts and canvas. 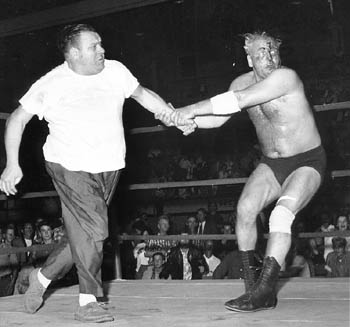 “One arena manager, Morris Snider, formerly of Memorial Gardens in North Bay, called Don the greatest showman of all the wrestlers who passed through,” Howard recounted, adding that Evans even landed in court in North Bay for allegedly brawling with a fan.

Part of Ontario’s allure for Evans extended beyond wrestling — an avid sportsman, he liked to hunt and fish, and spent considerable time at Frankie Hart’s Pine Falls Lodge and Dinty Parks’ Sunset Cabins.

“We were up there at Frankie Hart’s lodge many a time,” his son said.

He returned to the East Coast in 1959 to team occasionally with Karl Von Hess in a pairing of villains. Evans also was in undercard matches in upstate New York in the 1960s.

“He was winding down. He told me, ‘You know, Donald, I’m still a good wrestler and I know what to do, but I’m getting old enough to where I can’t be there when I want to be.'”

After he stepped out of the ring, Evans worked for a Kingston, N.Y., company that manufactured hydraulic systems for aircraft. He became active in the local chapter of the International Association of Machinist and Aerospace Workers, eventually rising to the office of president, before retiring after about 15 years on the job.

“He enjoyed the unionism very, very much. It was not easy. Keeping that company organized was a challenge, just like wrestling.”

For many years, Evans owned farmland near Kingston in the state’s Hudson River Valley — one of his farms now is the site of the Ulster County Airport. In retirement, he continued to hunt for grouse and other game, tended to his boat, and helped with gardens at his house.

He had been in good health until the last several months, when the crippling effects of arthritis in his hips and shoulders kept him confined, with little movement. Other health problems, including insertion of a pacemaker, followed.

“He just never recovered from any of that,” his son said. “The wrestling game lost a great man when he passed away,”

Evans is survived by his son and daughter-in-law, four grandchildren, and four great-grandchildren. His wife, Annette Helen Evans, died in 1992.

Contributions in Evans’ name can be made to the Roswell Park Cancer Institute, Elm and Carlton Streets, Buffalo, N.Y., 14263.