Jake “The Snake” Roberts – Pick Your Poison is the drink of the choice for those looking for a modern day tragedy in the form of a professional wrestler.

Disc one begins with a poignant poem entitled Thieves of Dreams written by Roberts scrolling up the screen. The last stanza eerily reads:

When I die
I feel it won’t be from another’s sword
But by the unstoppable
Heartbeat of dreams!
My own?

From there, it segues into a confessional style interview with Roberts by Jim Ross recorded in August. For those of you unfamiliar with this technique, it’s where someone off camera poses questions to a person and only the responses are featured in the final edit. A variety of people, ranging from Vince McMahon to Ricky Steamboat, also chime in throughout the DVD. 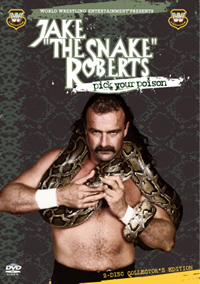 Roberts, born Aurelian Smith, Jr. in Gainesville, Texas, begins by discussing his tumultuous childhood: “My mom — I was born when she was 13. There’s been some discussions and some accusations about how all that came about because she was 12 years old when she became pregnant and it wasn’t by choice I don’t believe. My father [wrestler Grizzly Smith] was actually dating my grandmother at the time … that’s the beginning.”

From there, Roberts recalls how he went to live with his grandparents when his parents got divorced. He describes the emotional problems he went through as a result. Roberts would rarely see his father except for a visit once or twice a year and the occasional wrestling match on TV.

His grandfather was an alcoholic while his grandmother would eventually succumb to cancer. After living with his father briefly, he and his sister moved in with their mother and stepfather. Sadly, his sister’s life came to an end shortly afterwards.

“She married a guy, became pregnant and had a child,” explained Roberts in the DVD. “When the child was about eight months old, this man’s ex-wife broke into their house, kidnapped her and left the baby crying on the floor. Her and a black man dumped her body into a trunk of a car. They were witnessed doing it and drove off. We never got the body, but there was enough blood in the trunk of the car to know that she was definitely dead.”

Roberts first stepped into the ring as a referee. From there, the wrestling bug had bitten him. Roberts used his father’s doubts in him as a driving force to succeed.

He began honing his skills in Mid-South Wrestling for “Cowboy” Bill Watts. After suffering a variety of injuries, Roberts would eventually head to Mid-Atlantic Championship Wrestling.

I was also surprised to learn his finisher, the DDT, came about as an accident. During one particular match up, The Grappler (Len Denton) went to push Roberts. Denton accidentally stepped on the foot of Roberts causing both men to fall from the momentum. Roberts quickly jumped up as though he meant to fall down while Denton remained on the mat selling the move. As a result, the DDT was born.

The interview segments are intertwined with footage from his early career in the territories up until his appearance earlier this year on RAW. This a prime example of where WWE makes good use of the various video libraries acquired over the years. Of course, a great deal of focus is spent on his tenure in WWE.

“Well since he was Jake ‘The Snake’ Roberts, why not have him actually carry a snake to the ring,” explained McMahon. “Jake was game for anything. If he thought the snake would help him achieve notoriety, he was all for it.”

According to Roberts, “I had thought about it before with Bill Watts. In fact, I had mentioned it to Bill Watts, but Bill’s response to the snake was ‘this isn’t a goddamn circus.'”

It’s interesting to note Roberts warned booker George Scott and Vince McMahon about giving a DDT on the concrete floor prior to his match against Steamboat in May of 1986 on Saturday Night’s Main Event where the particular spot took place.

“I suffered a concussion,” recalled Steamboat. “You couldn’t get much real than that with something that happened on the cement floor using my head.”

It’s also a great trip down memory lane to see a lot of the old vignettes, promos and Snake Pit segments which are included on this release. Moreover, it’s amazing how well they hold up over time. A lot of people looking to improve their mic skills should take notice.

The big turning point in Roberts’ drug addiction came shortly after the guitar shot by The Honky Tonk Man, which ruptured two discs in his neck. Roberts continued wrestling for a year and half with the injury, which caused him to increase his medication.

Without spoiling more than I already have, Roberts offers opinions on his feuds with Ted DiBiase, Rick Rude, Andre the Giant, Ultimate Warrior, Randy Savage, and many more.

Oddly enough, there is a brief discussion regarding the film Beyond The Mat, which kind of surprised me. Roberts explains how he was led to believe the film was to be a documentary to help inform children about drugs. Roberts feels like Terry Funk “served him up on a platter.”

My complaint is I wish WWE would had tried to include the opinions of Funk and Mick Foley on how Roberts was portrayed by director Barry Blaustein since both also appeared in the film.

It would have also been interesting if Raven could had been involved in the project since he was trained by Roberts. Ever notice how Raven adopted a lot of the mannerisms and promo techniques that were used by Roberts? Granted I realize Raven is in TNA, but it would have been worthwhile to make the attempt.

The interview session ends with Roberts stating, “I’m not happy about where I’ve been, but I’m truly excited about where I’m going.”

Disc two is compromised of matches, promos and interviews stemming from his Mid-Atlantic days to his brief stint in ECW.

And yes, the highly entertaining vignettes with the Ultimate Warrior in the casket, cemetery and snake filled room are included.

One of the extra features on the DVD set allows you to watch his match with The Honky Tonk Man at WrestleMania III with alternate commentary by Jim Ross and Roberts himself. Instead of your classic move by move description, it’s more akin to the explanation an actor or director would give reflecting on his or her own work.

If you’re looking for a stocking stuffer this Christmas, Jake “The Snake” Roberts – Pick Your Poison won’t disappoint … trust me.