Russo asks to be Forgiven in memoir

The mere mention of the name Vince Russo still elicits a response from those inside and outside the wrestling community. True to form, Forgiven: One Man’s Journey from Self-Glorification to Sanctification, written by Russo, won’t disappoint in the reaction department.

Speaking of reactions, I first met and interviewed Russo after the August 14, 2002 TNA PPV for my old college radio show. Contrary to what I had read about his personality on the web, Russo came across as a very respectful and polite individual during our conversation. I was also present at the November 27, 2002 TNA PPV where he first declared himself the “Antichrist of professional wrestling” in a very seething promo.

Nearly three years later from that declaration, Russo has released a book that contains his “old views” along with his current Christian outlook towards life. Confused yet? Allow me to clarify: This book was originally entitled Welcome to Bizarroland, which was an autobiography penned in 2000 along with appendages over the following years. It was initially meant to be a complete burial of everyone that had ever crossed him along with all the juicy details people had been clamoring to read for years.

Prior to its publication, Russo asked Jesus Christ for forgiveness and became a born again Christian. No longer having the desire to release a book filled with personal insults and attacks, he decided to revise his original concept altogether.

Russo’s former partner in crime, Ed Ferrara, best describes the premise in the foreword by writing, “This book, therefore, is a product of Vince-Forgiven taking extended passages from Bizarroland (written by Vince-2000) and commenting upon them from his newly enlightened perspective.”

The first chapter, The Day I Died, begins with the old Vince commenting on his disdain for Jeff Jarrett just prior to being saved. This chapter also maps out how Russo essentially reached his wit’s end, turned his life over to God and formed a new outlook on life in October 2003.

The second chapter explains the transformation the original manuscript went through.

According to the text, “As the timeless cliché in wrestling goes — this one was going to be ‘no holds barred.’ I was dropping the dime on everybody. I had known everything they had ever done. I was going to be the younger brother who spent weeks collecting all the evidence on the older brother, until I had just enough to tell mom. Man, this was going to be bad.”

The book was originally meant to be nothing more than pure shock value. Instead, Russo opted to edit out the foul language while keeping a lot of the original content intact. That’s right, no F-bombs appear within the text whatsoever. 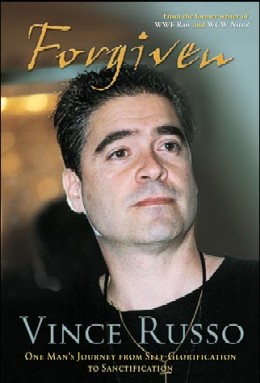 The subsequent chapters summarize Russo’s early childhood, adolescence and college years. There are accounts of how his parents and grandparents served as various inspirations revealing a unique side of Russo a lot of fans probably thought didn’t exist.

Russo also describes how he was always enamored with the entertainment aspect of various television characters, especially those of the World Wide Wrestling Federation.

“There was just something so exciting about this. It was new, it was fresh and it was entertainment … From the moment I saw Captain Lou and the Valiants, I recognized the wrestling business for what it truly was — sports entertainment.”

Another thing readers will learn is that Russo’s college years weren’t extremely wild. In fact, he’s very up front about his lack of fornication. For all you perverts out there, don’t expect to read any “sexcapades” in this book — sorry. Apparently, he spent most of his time working on the school newspaper and going to basketball games instead.

Readers will also discover Russo didn’t break into the wrestling business instantly. After graduation and marriage, he held down various jobs from academic textbook salesman to owning video stores, which led to his involvement in a wrestling radio show. Without rehashing the chapters, there are a lot of amusing stories from his radio days involving such names as Phil Mushnick, Dave Meltzer, Jim Monsees, and “Big Vito” LoGrasso.

“Vince [McMahon] was surrounded by yes-men, telling him everything he wanted to hear whether it was right or wrong. Vince’s yes-men were killing him. There was nobody in that company at the time who would tell Vince like it was. And that’s what he needed.”

Oddly enough, it was “Cowboy” Bill Watts that helped to elevate Russo by inviting him to sit in on the booking committee meetings. Watts himself had just been brought in to help with the creative direction. The Cowboy and The New Yawker would sit in the publications conference room watching hours of footage while exchanging ideas. From there, Russo would eventually become the head writer.

I would like to reiterate Russo was also working alongside Jim Cornette at the time. Given their storied past (which is touched upon in this book), Russo actually pays homage to him.

“When he isn’t blowing a gasket, I like Jim Cornette. In his day, he was by far one of the best personalities in the business. The guy has a great mind — he comes up with things off the cuff that others couldn’t come up with in a lifetime.

“In my opinion — and keep in mind, this is only my opinion — if Jim Cornette made the radical decision to adapt his way of thinking to the 21st century, he could be the man to take the [WWE] out of its current slump. For whatever reasons, however, Jim refuses to do that… Part of me respects him for sticking to his guns — the other part just doesn’t get it.”

The book also includes Russo’s views on the 1997 Survivor Series and Bret Hart: “Bret stood tall for everything he represented — and he took that role very seriously. With great pride he wore the mantle of ‘Canadian Hero,’ only to be ridiculed by others. But think about it — what athlete today really takes pride in being a hero and role model? It meant a lot to Bret, and where many thought that he was caught up in his own gimmick, I found it noble. He lived to be a hero — and in today’s society there is nothing wrong with that. The fact is, we could use more Bret Harts.”

Russo shares his insight on a wide array of subjects including the pressures of being a head writer, the paranoia that exists within the business, Owen Hart’s death, and the current creative direction of WWE. The book also serves up a very up close and personal point of view of how demanding it is to work for Vince McMahon.

“I was attached to Vince’s hip 24/7. Don’t get me wrong — I’m not trying to paint a negative picture of the boss here — but it was taxing. You’d be working every passing minute, from the second you got in the car. Whether it was a 30-minute drive, or a four hour road trip — you were talking wrestling. Not the wife, not the kids — they didn’t matter. All that mattered was ‘the show.’ And the minute you fell asleep — the very second — he would take great joy in waking you up. At the end of every trip Vince would turn to me and ask, ‘Did I get it all?'”

If you’re hoping to read about Russo’s experiences in WCW and TNA, you’ll have to wait for the next book. Forgiven: One Man’s Journey from Self-Glorification to Sanctification is a 340-page outlook on wrestling, life and religion while at the same time giving readers another glimpse into the world of sports entertainment according to Vince Russo that I recommend to both his supporters and critics.