Oh what could have — and by all rights should have been.

WWE Home Video recently released a three-DVD set chronicling the Undertaker’s legacy in the Fed, and as much of a shock as this may be to some people, I was underwhelmed with the final product.

Don’t get me wrong; if you’re a fan of the Undertaker, you’ll love this set. There are some wicked matches here from the beginning of the character until the very end; but WWE seriously dropped the ball in some parts. 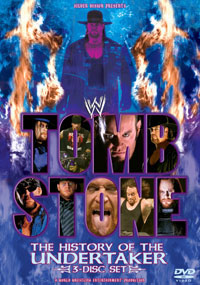 As was the case with the Ric Flair and Rob Van Dam bio DVDs, the concentration of Tombstone: The History of the Undertaker is on matches. Some of the Undertaker’s most memorable bouts are included, such as his first-ever title victory over Hulk Hogan (and his second title win from the Hulkster in 2002), his first match with Kane and title tilts against the likes of The Rock and Mankind.

Of course, no Undertaker compilation would be complete without some gimmick bouts, since no one in the history of WWE has made their mark in specialty matches quite like ‘Taker. Three of his Hell in a Cell matches are part of the compilation, including the first of its kind against Shawn Michaels. Others include Buried Alive matches with Mankind and Vince McMahon, the Inferno Match with Kane and a Casket Match with Yokozuna.

As is the case with other WWE DVDs, the “true” gems are in the extras. Here, we get a wide variety of vignettes and Funeral Parlour segments, but you also get some high-quality technical matches. Of these, the can’t-miss bout is Undertaker vs. Kurt Angle from Smackdown a couple years back. If it means anything, that bout took my nod for match of the year in 2003.

Unfortunately, if you’re looking for in-depth coverage of the Deadman, you need not look any further into this review, because there’s nothing more to speak of.

Unlike any other WWE DVD in recent memory, there is absolutely no new interview footage with Undertaker. Unlike the aforementioned Flair and RVD compilations, a narrator, rather than Mark Calloway, introduces all of the matches. We don’t get any true insight into the pre-WWE Calloway, nor is there any true commentary as to the transformations the character underwent. It would have been a lot better to see Undertaker comment on some of the more controversial angles he’s been involved in, including the Mideon sacrifice and the “symbol-hanging” of Steve Austin. To hear why the Undertaker transitioned to the “American Badass,” then back to the dark side would have been great. Hell, I would’ve been happy just with some Paul Bearer stories or Undertaker re-telling the Sid Vicious “crap-plex” story.

While this element is probably not important to a lot of fans, it is to me. Most WWE hardcore fans will already have the best ‘Taker matches on video or DVD already. There really has to be something extra, or there’s no reason to shell out.

In the end, Tombstone is a “greatest hits” album in a world where rockumentaries are far and away more popular. With little in terms of substance, Tombstone will be easily lost in a sea of otherwise wicked WWE products. If you don’t have a lot of Undertaker’s past matches already in your collection, by all means pick up this compilation; if you want a recording that is more in depth, however, you’re going to have to wait until Calloway leaves WWE and does a shoot video.