Bret Hart seems to be happy again. Not that he wasn’t necessarily happy before, but over the past few years, it may not have been easy for wrestling fans to see that. It was a lot easier, though, based on what he told SLAM! Wrestling at the Fight Network launch party held in Toronto last Friday night. 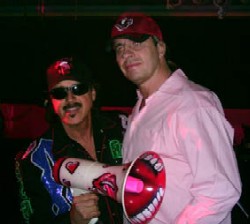 For example, he’s happy that he was able to help The Fight Network gain some publicity. The concept, a channel dedicated to fight programming like boxing, mixed martial arts, and pro wrestling is one that Bret really likes. “I wish they had something like it when I was a kid,” he said. “It’s a great idea.”

Though Bret is not entirely familiar with mixed martial arts, he does see a lot of similarities between TFN’s other main features, boxing and wrestling.

“I always got a lot of my wrestling concepts from boxing,” he observed. “(I always tried) to make my matches come alive and be as real as when (you were) watching guys like Muhammad Ali and George Foreman. The structure of a really great wrestling match is really no different than a really great boxing match. Just switch the punching with a combination of moves, switch the drama of a boxing match with a series of holds. There’s a sort of beauty in it, an art, whether it’s pro wrestling or pro boxing.”

It would be hard to argue Hart’s expertise in such matters, being that he is generally considered to be one of the best wrestlers of all time. You would find few wrestling fans today that don’t know about his storied career, including the infamous ‘Survivor Series Screwjob’ that saw him leave the WWE in 1997 in controversial fashion. His departure left a bad taste in his mouth towards the company, which was further exacerbated when his brother Owen was tragically killed while performing a stunt on a WWE pay-per-view show in 1999.

As a result of those events, over the next few years, Bret became one of the WWE’s most outspoken detractors, supporting his sister-in-law Martha in a wrongful death lawsuit against the company and criticizing them at nearly every opportunity. It was a divisive stance to take, and fans were split; some thought that, given the circumstances, he was absolutely in the right to do so, while others thought that Bret had just descended into a pool of ugly bitterness.

Either way, it was a huge shock when, earlier this year, he agreed to put aside his differences with WWE, and work with the company on creating a retrospective DVD set of his career.

For his part, Bret was happy with both the experience and the result.

“I’m glad that I can say to you today that (my experience working with WWE on the DVD) was first-rate. They were really good with me. We did an accurate portrayal of my career. My life wasn’t all about Survivor Series,” he said. “My life was not all about Owen’s death. I had a great career before either of those two events, and I always wanted to be remembered for what I was able to contribute.”

Hart dismisses those who would question his integrity for uniting with the company that he once said he felt betrayed by, noting that it was really his only opportunity to ensure that the portrayal was fair and all-encompassing.

“It was suggested to me once in a while that I sold out. I didn’t sell out anything,” he stated firmly. “In fact, I think what I did was important for my sake, and for my fans’ sake. I think what I did (in WWE) was really important, and I wouldn’t want anything I did to be forgotten.”

To illustrate his point, Hart relayed an encounter he had with a five-year-old fan that he met shortly after he agreed to participate on the DVD. “He told me that he was really excited to see my matches, and he seemed to know everything about me. I asked him how many matches of mine he had actually even seen. He told me he hadn’t ever seen any, but he used me all the time when playing the video game.” It was that moment which solidified to Hart that he had made the right decision. “I want kids to be able to see me.”

If there is one thing Bret isn’t happy about with the DVD, it’s that he feels that not comprehensive enough.

“I think I could come up with another two discs at least of some of my greatest matches that didn’t make this one. I wrestled ‘Macho Man’ Randy Savage many years ago on Saturday Night’s Main Event. I wanted to use that match, but unfortunately due to some legal issues — because Jesse Ventura did the commentary — they couldn’t use it. That’s just one match that I feel should have been on there. I would have loved to use it even (with alternative commentary). Hopefully we can do another collection of matches sometime.”

At the very least, Hart is pleased that the DVD didn’t only focus on the negative aspect of his WWE career. The original plan was to title the collection Screwed: The Bret Hart Story, but when he became involved, it became more of a tribute package. He’s very glad of that, particularly since he feels he deserves better treatment than the Ultimate Warrior, who was the subject of a recent WWE release that essentially buried the character and the performer.

“I’m glad they didn’t call it Screwed, and I’m glad they didn’t do a (DVD like they did on) Warrior,” Bret said. “That’s where they were going, and that (would have been) a shame.” Pointing out the difference between the two, Bret pulls no punches. “There’s a big difference between Warrior and me: we’re complete opposites in that the Warrior (really) was an asshole.”

Another main difference between the two is that while Warrior seemingly hates the wrestling industry, Hart still has some appreciation for his profession, and some of its current stars.

Hart has said on occasion that he would have liked to wrestle Angle when he was still active in the ring. However, he never got that chance, and after suffering a stroke a few years ago, is quite sure that he won’t ever have the chance to do so.

“Overall, I’m doing okay, I’m healthy. I’m not as thin as I used to be,” he joked. “But I can walk, and that’s all I really care about. (As far as wrestling), I don’t see myself playing a storyline character in wrestling ever again. But there are some things I would like to do with WWE.”

He won’t rule out possibly doing something with TNA Wrestling either somewhere down the road. One would think that Hart would be an ideal person to bring in to the company, perhaps to involve him with Team Canada somehow; it would seem a natural connection, given that the Canadian heel stable is something that Hart pioneered during his WWE run.

“I’ve watched a little bit of TNA, but I’m not as familiar with the product as I would like to be. I have a lot of respect for them,” Bret said. “They’ve got a tough job competing with WWE. I appreciate the fact that they’re doing their best. If I could do something to help guys out, I could see myself do that.”

In the meantime, Hart is looking for another forum to display his talents: the stage. He starred as the Genie in a musical version of Aladdin that had a good run in Toronto last year, and it looks like he’ll be reprising that role again.

“I loved (acting in the play), I can’t wait to do it again. It kind of resurrected my character, it gave me one last ride. I’m really glad that they thought of me and asked me to be part of it. It’s a lot of fun,” he said, smiling at the thought.

Hart was also smiling when he addressed the audience at the Fight Network party, and reminisced with his friend and former manager, Jimmy “Mouth of the South” Hart over some of his memorable appearances in Toronto over the course of his career. As he stood in the middle of the ring and the crowd chanted “Bret! Bret! Bret!”, it started slowly, and after a few minutes, he wore a beaming smile. It was at that moment that Bret Hart’s happiness shone through one more time, visible to all.