WATERLOO, Iowa – The lights dimmed. Only the scaled-down ring was illuminated. Anticipation mounted. Then “We Will Rock You” by Queen pumped through the sound system, energizing the crowd.

Meanwhile, Jorge Rojas stripped away his own identity, pulling on the trunks, the mask and the cape — becoming Mil Mascaras. And so it began. Mil Mascaras ran into the room, screaming, high-fiving and amping up the energy levels before making his way to the ring. 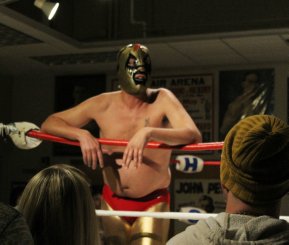 And that was only the first few minutes of Rojas’ performance-art piece at the National Wrestling Hall of Fame Dan Gable Museum in Waterloo, Iowa, last weekend. The piece pays tribute to Rojas’ childhood hero Mil Mascaras (Aaron Rodríguez), while touching on issues of race, acceptance and religion.

Though Rojas said Mil Mascaras is essentially a representation of how people portray themselves publicly and privately, he still has to mentally prepare for his transformation. But it’s not so much putting on an act as giving him the opportunity to don a different persona.

“(Performance art) allows for them (the different personas) to show up, and so in order to do that, I think it must be a lot like what wrestlers do,” Rojas said. “I go into the locker room and I start, I put on my persona. I put on my tights and I put on my mask and I put on my cape and as I’m doing that, I’m becoming. So I’m getting pumped up, I’m exercising and warming up, stretching. But I’m becoming Mil Mascaras, in my mind.”

Rojas has been performing the piece off and on for about eight years. The first performance occurred through a web stream and was based out of his apartment in Brooklyn. Items he has collected over the years became props in the act, such as a Mil Mascaras mask, a paper mache devil from Mexico and a pink Jesus that tells fortunes.

“It was really just me experimenting with performance art as I was doing this piece,” Rojas said. “But then I started to bring in my own personal life and upbringing, where I’m bringing up being indoctrinated into religion and some of the ideas about good and evil and finding some interesting correlations between these superheroes and these luchadores with special superpowers and then also thinking about religion and all that.”

Rojas said the initial Internet performance is “kind of creepy and awful, but the essence of the piece was there.”

“I was raised Mormon. I didn’t go into that specific thing in (this performance) because I think a lot of people from different religions can identify with some of the pieces of it, or maybe not,” Rojas said. “So religion is a heavy thing, and it can create a lot of issues and traumas and guilt and confusion, and so I try to work those things out.” 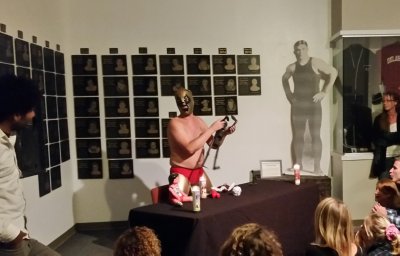 Back on his stage as Mil Mascaras, Rojas asked the crowd of roughly 40 people, “What can I believe if these superheroes, they’re supposed to be fantasy, then I’m told that there’s this all-knowing God in the sky that might or might not be judging me, might not love me depending on the color of my skin or my sexual preference or things like that?”

Moments later, his monologue jumped to the question of who would win in a wrestling match between the devil and Jesus. When he asked the fans surrounding the ring, he received mixed responses. But when prodded, one fan said, “The face always turns heel.”

Moments later, Rojas put their answers to the test — with his Jesus and devil dolls — and the crowd ultimately decided the devil bested Jesus. While it’s always up in the air who will emerge the victor, Rojas said the devil does typically come out on top, perhaps because “people who like performance art are a little more irreverent.”

The three main luchadores Rojas grew up watching were El Santo, Blue Demon and Mil Mascaras, who he now uses as an alter ego. It was the mystery of Mil Mascaras that appealed to Rojas.

“The whole idea is when you take off one of his masks, there’s always another mask. So you can’t really quite get to his identity,” Rojas said. “You can’t and because of that you can’t take away his power, like I talked about in the piece. So, I found it a very interesting connection to how we present ourselves in social media and the personas that we have.”

Rojas performed at the museum at the request of Jeffrey Byrd, of University of Northern Iowa’s art department, after a request during a performance festival in Salt Lake City, where Rojas is based.

The performance in Waterloo was part of UNI’s VERTIGO Performing Art Series and also the first time Rojas stepped in the squared circle for his art.

“There’s no cushion. It’s plywood. And I meant it when I was like, ‘Oh, f—,'” Rojas said, referring to shouting the expletive the first time he hit the mat during his piece.

Pain notwithstanding, he said the experience was amazing.