It is a rare occasion to see Ultimo Dragon wrestle an independent wrestling card as he simply doesn’t do them. Aside from one appearance in December 2004, Dragon has been absent from the indy scene. On the October 8th edition of NYWC (New York Wrestling Connection) Rampage in front of over 600 fans however, the Dragon resurfaced to do battle again.

Dragon, who competed for WCW when the company struck a deal with New Japan, signed with WWE in 2003. After a stint there, he quit, signing a deal that would see him to compete on WWE’s Japanese shows for the remainder of his contract, but otherwise leave him free to wrestle where he pleased. 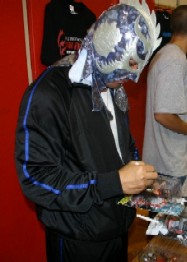 In December 2004, Dragon popped up out of nowhere, to wrestle on the FUSION Debut Show. He competed in the main event, alongside The Amazing Red as they faced Jose and Joel Maximo (The SAT). Then, like many times before, Dragon disappeared back to his realm.

It was not until October 8, 2005, that Dragon would be seen again, this time making his NYWC debut. It was originally scheduled to be a match between Dragon and “The New F’N Show” Jerry Lynn, but when Dragon found out it was going to be a title shot, he declined the offer, opting rather to compete in a regular match out of respect for the Champion.

Looking around on the roster, NYWC came across a name that was familiar with Dragon, his former partner, The Amazing Red. After a few phone calls, the deal was finalized and the match was set, Ultimo Dragon and Amazing Red vs Josh Daniels and Quiet Storm in a featured tag team bout.

The match for the most part was back and forth, and saw Amazing Red delivering a brunt of the punishment. Dragon got his licks in, but also received quite a few in return. Things came crumbling down for the dream duo, as Dragon was sent to the floor, allowing “The All Around Best” Xavier to sneak in and clock Red, leading to his demise. Not to be overshadowed, Dragon returned back into the ring and hit Xavier with his flipping reverse DDT, much to the delight of the Japanese Press and NYWC loyalists.

While that match could be a main event on any other card, NYWC found a way to try and top it, brining in OVW star, “Livewyre” Mike Mondo and Matt Hyson (aka Spike Dudley), to face NYWC stars Mason Raige and Dickie Rodz. Mondo, the hometown boy, decided to make the tag match a little sweeter than usual, adopting the rules of a “Pat-Med Street Fight”.

True to his hardcore style Hyson broke a crutch over the back of Raige while Mondo delivered some heavy shots to Rodz. While Hyson was in control for most of the match there were points where he found himself in some compromising predicaments, namely getting thrown over the top rope and through a table at ringside. In the end, Hyson and Mondo found themselves victorious, capping off an incredible night of action.

– The SAT (Jose and Joel Maximo) and The Angus Brothers (Danny and Billy Angus) defeated The Solution (Havok and Papadon), Tony Burma and Mike Spinelli w/ Crusher Doogan and “The Sure Thing” John Shane in an 8 Man Tag Team Match