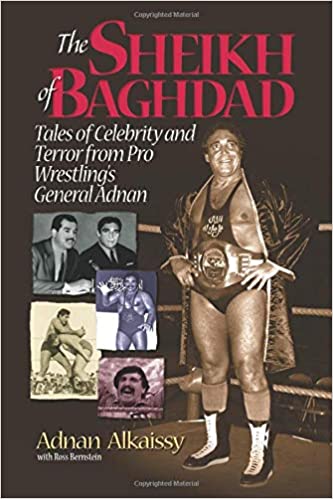 The Sheikh of Baghdad: An Iraqi Celebrity Athlete’s Pro Wrestling Adventures (Triumph Books), written with Minnesota author Ross Bernstein, probably has its closest ties to Johnny Rougeau’s memoirs, written on his deathbed 1983. Like Rougeau and his ties to the burgeoning FLQ movement and Rene Levesque in the 1960s in Quebec, Alkaissy was there in Baghdad as Saddam Hussein rose to power. So their personal lives are so intertwined with politics that wrestling becomes a secondary element to their book. (With Rougeau, there was the junior hockey as a third element as well.)

Alkaissy’s friendship with Hussein dated back to high school. His insights into the young, ambitious Hussein with obvious political skills are fascinating, though perhaps not to the point that it will be banned reading for any international tribunal member when Hussein is eventually tried.The story of Alkaissy really starts when he leaves Iraq for the United States. On the ship across the Atlantic he meets Canadian wrestling legend Yvon Robert (NOT Yvonne as the book annoyingly spells), who tells him about life as a pro wrestling. Alkaissy heads to the University of Houston on a football scholarship, never having played American football before. Wanting to take up amateur wrestling again, he transfers to the University of Oklahoma where he lands a spot on the storied grappling team as a walk-on. Leaving to turn professional before finishing his degree — Robert hooked him up in Houston — Alkaissy works under his real name until becoming Chief Billy White Wolf, a Native-American character at the behest of promoter Don Owen in Portland.

With a few years under his belt as a pro wrestler, Alkaissy returns home to Iraq, where Hussein commands Alkaissy to bring pro wrestling to the country for the first time. A national hero is soon established as Alkaissy takes on the likes of George Gordienko, Andre the Giant and Bob Roop in front of crowds that exceed 100,000. Though it often sounds like hyperbole, Alkaissy reminds the reader again and again that it was true. Since so little had ever been revealed to North American historians about wrestling in Iraq, the stories here are invaluable and quite fascinating.

The photos in The Sheikh of Baghdad are quite different than your average wrestling book, with Alkaissy standing beside political player after political player, or competing in bouts in far-off Iraq.

Growing weary of life as a political tool and fearing for his life as his popularity rivals Hussein’s, Alkaissy decides to flee the cushy life as a national icon. “It was hard to leave it all behind, it really was. I had so many extravagant gifts that I had received from people, too, like gold watches, swords, and pistols. I just washed my hands of all of it,” Alkaissy writes. “Luckily I had socked away some cash that I had converted to U.S. dollars on the black market during my first few years in Iraq. I had kept it hidden in my closet for a rainy day, and as far as I could tell it was pouring outside.”

He escapes back to the United States where he works as both White Wolf and later Sheik Adnan Alkaissy. It’s a surface level look at his wrestling career, at best, talking about a few personalities and locations, but never going really in-depth. His time in the AWA out of Minnesota is the meat of the wrestling-part of the book, but it’ll leave you hungry for more.

Then there’s his turn as General Adnan beside Sgt. Slaughter during the Gulf War. We’ve heard Sarge’s story on a few occasions — death threats, security issues — so it’s nice to get a different perspective. Probably because he’s still getting royalty cheques somehow, Alkaissy never says a bad word about Vince McMahon, saying that it’s all business. He and Bernstein perpetuate the company line on WrestleMania VII as well, claiming that it was security issues that drove the show indoors from the Los Angeles Coliseum to the Los Angeles Sports Arena rather than poor ticket sales.

There are a few beefs with the book. Datelines and specific dates seem somewhat mixed up or murky. Photos allude to portions of his career that aren’t discussed in the text, like working WWWF with Chief Jay Strongbow, or what King Kong (Bruiser) Brody, the Mongolian Stomper (Archie Gouldie) or Boris Zukhoff were like as charges when he was a manager. And, while I sound like a broken record, how about an index?

Still, there is so much unique in The Sheikh of Baghdad that there is little difficulty in recommending it from this end, especially if you have any sort of political science background or interest in the basics of life in Iraq and the Middle East.

EDITOR’S NOTE: We’ll have an interview with Alkaissy in the coming weeks on SLAM! Wrestling.