Preaching now a part of DiBiase

Ted DiBiase may be known as “The Million Dollar Man,” but to a select group he is seen as much more. He is more than a grappling great, more than another villan of the squared circle. He is a man with a message — and he wants the world to hear it.

Back in 1993, DiBiase went through a life changing experience, where he gave his heart to the Lord and became part of a growing group of Born Again Christians. The experience was so impactful that DiBiase began preaching what he was taught to others who were in the same situation he was in. 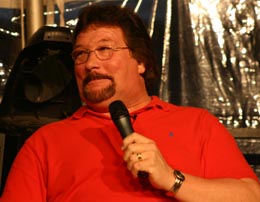 The change didn’t take effect immediately DiBiase admitted, but over time he became more and more accustomed to his new lifestyle. His habits had changed, his marriage that was nearly destroyed, was saved and his life was rejuvenated.

It was natural that when Summerfest 2005 rolled around a few weeks back, “The Millon Dollar Man” Ted DiBiase would be on hand to share his story in front of a capacity crowd in Fernwood, NY. People from all different backgrounds and walks of life united to listen to an inspiring story, a story of a man who had it all, lost it and gained it all back.

The night started off with a parody of The Tonight Show with Ted DiBiase as the main guest. DiBiase had been preaching all weekend and was ready to take a new approach, DiBiase sat down and accepted questions from fans, including ones about his “Million Dollar attire.”

When the question was posed on how much the Million Dollar belt actually cost, DiBiase responded, “$40,000, there were only three real diamonds on the belt in the back where nobody could see them. I asked them (WWF Officials) why, and they told me ‘So if anyone asks if the diamonds are real, you can say “Yes” and you wouldn’t be lying.'”

DiBiase accepted more questions and then headed to the backstage area, where he chatted with SLAM! Wrestling. When asked what his favorite part of the weekend was, DiBiase laughingly said, “I kind of liked The Tonight Show.” DiBiase was genuinely excited to be able to interact with a large crowd and help them get through any difficulties that they had in life.

Once the other portions of the show were completed, DiBiase returned to the stage to tell a few more stories. DiBiase talked of a time where he and Greg “The Hammer” Valentine went and spoke to a group. There were two deaf children in attendance and they all got together and performed a miracle and were ecstatic when the girls began reacting to various sounds. It was an experience DiBiase summed up by saying, “I wouldn’t have believed it had I not seen it.”

DiBiase spoke of how his father’s death in the ring and his actions that nearly cost him his marriage. DiBiase was once the center of attention in the wrestling industry and unfortunately with all the fame and glory he enjoyed, also came a lot of pressure. DiBiase collapsed and let his demons get the best of him. He was drowning in a pool of his own deceit.

Once he found the errors in his ways, he once again rose to the top. Earlier this year, DiBiase was offered a contract to be a WWE road agent. DiBiase accepted and was welcomed back with open arms. The thing that shocked WWE personnel the most was his change in character. DiBiase was no longer the same person, he was a man with a mission in life, a mission to help, not hurt. DiBiase had become a man that personnel could model themselves after.

Once the story telling was done, DiBiase invited fans to accept the Lord like he had in 1993. DiBiase then said a prayer and walked over to a nearby tent to sign autographs for any and all fans who approached him. If anything at all, DiBiase left the crowd of fans thinking. He may have portrayed a dastardly demon inside the squared circle, but outside the ring, he is now a caring human being with a heart of gold and a message so powerful that people flock from everywhere to hear it.