Diva searches, Hollywood-laced wrestling, and triple-dipped moonsaults found few aficionados this weekend, as fans from across the country gathered for a celebration of old-fashioned, Mid-Atlantic wrestling.

“It’s got better athletes than we ever had in wrestling,” said former NWA world champion Terry Funk of today’s scene. “But I truly believe we had better wrestlers.”

Funk’s sentiments were echoed by just about every one of the approximately 500 fans and wrestlers who showed up at the first day of promoter Greg Price’s three-day NWA Legends Fanfest. 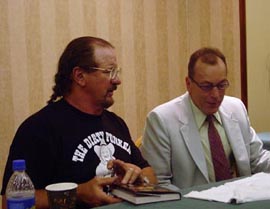 “No one up there [in the WWE] could go an hour, 90 minutes, or two hours, like we used to go,” said former NWA star Paul Jones. One of Jones’ favorite opponents, Ole Anderson, quickly added, “Those were some of the best matches I ever had.”

Those sentiments were underscored by the guest list, which included the likes of former NWA champions Dory Funk Jr., Harley Race and Jack Brisco; Johnny “Mr. Wrestling II” Walker; and even lesser luminaries like the opening-match tag team of Bill and Randy Mulkey.

Typifying the predominant theme, Jim Cornette, the legendary manager of The Midnight Express, cracked: “Is there even any reason why we should talk about wrestling? Isn’t it a depressing topic any more?”

During a rambling question-and-answer session Friday night, Funk, a self-described “real old fart” at 61, emphasized that his comments are not intended as a knock on the current crop of wrestlers.

But WWE scripts and the creative team create characters far too carefully, at the expense of believability and the “suspension of disbelief,” he said.

For instance, the bulbous Dusty Rhodes, a frequent foe, one time announced to Funk that he would move like a modern-day aerialist during one of their matches.

Mimicking Rhodes’ lisp, Funk recalled the conversation. “He said, ‘I’m flying off like an eagle off the top rope. I’m going to fly like a bird. I’m flying like an eagle, Terry … and when you go down, 1-2-3, they’re going to shower me with flowers.”

Funk said he got in position to bear the brunt of Rhodes’ descent, when “he stumbles on the ropes coming down … he looked like a sack of shit.” But, back in the dressing room, Rhodes was full of glee, asking, “Did you see me fly, Terry?”

“We were who we wanted to be,” Funk concluded. “We were extensions of our own personalities.”

Funk also made a strong plug for the election of Dick Murdoch to the Wrestling Observer Hall of Fame. The Texan, who died in 1996, was “an absolute character in the business who needs to be remembered,” Funk said.

Funk reached beyond the non-wrestling arena, as well, telling fans he wiped the Scrabble board with Nick Bockwinkel, the loquacious former AWA champion. “He hated that,” Funk laughed.

Cornette followed Funk on the Fanfest stage and immediately explained his recent dismissal as a consultant to the WWE. The federation dumped Cornette, a part-owner of its Ohio Valley Wrestling developmental territory, after an altercation with a wrestler. An admitted hothead, Cornette slapped one of the wrestlers in the regional promotion who was not living up to the manager’s standards.

Cornette said the disciplinary action was one of the best things to happen to him in recent years. He said he was burned out after booking for various offices for 14 of the last 16 years, and bucked at WWE’s insistence on having more say-so in the Ohio Valley territory.

“It got the monkey off my back,” said Cornette, who still oversees live events and handles TV sales for Ohio Valley. “When you hate working for yourself and hate your job, you’re not doing good for anybody.”

Though he is anything but close friends with Paul Heyman, who replaced him, he praised his successor’s knack for the business and said the booking and writing end of the work rests in good hands.

Otherwise, Cornette was his usual profane and hilarious self, with a heavy dose of sarcasm directed at the current wrestling product.

“What’s going on these days doesn’t offend me as a booker, it offends me as a wrestling fan,” he said.

The emphasis on nostalgia will take a turn to the more recent, however, with Sunday’s scheduled appearance of Bret Hart.