Life is great when you’re Booker T. The Smackdown! superstar recently married long-time girlfriend Sharmell Sullivan (who was Paisley in WCW), opened a wrestling school in Houston, Texas with brother Stevie Ray, and is looking forward to the final two years of his in-ring career.

“I recently renewed my contract,” Booker told the popular show Wrestletalk Radio recently. “I tried to sign for just one more year but the company believed in me enough to ask me to sign for two, so I will definitely be on your TV for two more years.” 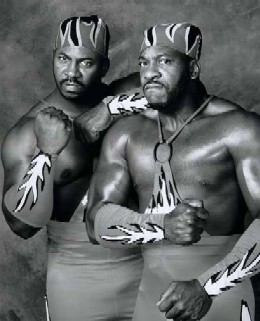 It has been an interesting — and at times controversial — ride for Booker, who came to WWE after WCW folded. He still remembers the final Nitro in Panama City, Florida.

“The atmosphere was somber and a lot of guys were sad that it was all coming to an end. It was the end of an era. It was something special for myself because I got to fulfill my dreams in another way, I always wondered how I would do in WWE and I knew that my chance had come. I was happy and sad at the same time. I was the United States champion going in and won the World Title from Scott Steiner that night so it was a great night for me in that aspect. To work with Scott to end it was cool, we had a lot of history together, Harlem Heat had a lot of matches with The Steiner Brothers so to do it with Scott meant a lot.”

While he misses WCW, his run with WWE has been enjoyable, with the highlight being his three appearances at Wrestlemania against Edge, Triple H and a four corners tag title defence with Rob Van Dam.

“Being part of Wrestlemania is something every wrestler wants to do regardless of where you are. Working in WCW when ‘Mania came around you wished you were there. I really enjoyed watching the promos and the big build ups and wondered what it would be like, I wished for one of them for myself. When I did the feud with Triple H it was unbelievable to go out (at Wrestlemania XIX) and wrestle for the title and take the people on a rollercoaster ride. It didn’t go that way my night and was something I wouldn’t trade for the world.”

Booker has settled down however and is focusing on interests outside of the ring in addition to his career. Marrying Sharmell was one of the best days of his life.

“We were together for five years, lived together and then got married. It wasn’t one of those Cinderella stories, we fell in love right away but we didn’t fall into a relationship and get married, we wanted to make sure it was right before we got married. In the business it can be lonely, especially at the top. The night I won the WCW title I was so beat up and tired I was in my hotel room, I had the belt with me and no one to celebrate with. People imagine everything is great and lovely, but at the time I was the WCW champion it was a lonely time, my relationship was in chaos. To have my wife with me to share it now is pretty cool.”

Booker and Sharmell were recently in a high profile feud with Kurt Angle prior to the former Olympian being drafted to Raw, which raised some eyebrows due to its sexual nature.

“I am definitely comfortable with it. It’s TV, no different then anything else you can watch. If you take it too seriously you would get caught up on. Everything we have done has been good quality and good taste and I wouldn’t let it be any other way. I don’t have any say in writing the storyline but I have a say in what my wife and I are willing to do. We are all human beings, we have to leave that arena and come home so there has to be a certain level of respect.”

The other big news is the opening of the Booker T and Stevie Ray Wrestling Academy in Houston, Texas.

“It is something I have always wanted to do and we finally got it kicked off. We have been getting a lot of good feedback, working with guys like Dean Malenko and Steve Keirn who are great trainers has put me on the right track. The training business is something new for me so having guys like that tutor me is great. I will be doing most of the training. Classes are going to be two or three days a week. If it takes me four months to train them, we will take it, five months, sure. It will be an individual basis. After the training is up, we aren’t just taking kids’ money and telling them to go, they can still be part of what we do, our shows and fundraisers and give guys experience. There will be dues every month just to continue to be part of the Academy. I make it clear that they won’t make a million dollars, to get into the business is an adventure in itself and say ‘I have been on a hell of a ride’ regardless of where you go with it.”

It’s becoming a trend that established wrestlers are starting to get into the training game.

“Here in Houston there have been guys pretending to be trainers for a long time, taking guys’ money and having no direction for kids to go. I am close to the end of my career, I have a lot left in me to do but I want to go out the right way. I will train students the way I was taught, to create things the way I used to watch it. When I was a kid everyone had their own unique style and you knew why you liked them or hated them. The way people are trained today the kids don’t get that. I feel like I have an obligation to give back in that aspect and train kids and get them on the right track. Hopefully a few of them can go around the world and do their thing.”

Booker is willing to put his name on the line for those who have the same passion for the business that took him to five WCW titles and ten WCW tag team championships.

“You need to be trained by someone reputable and your word is everything in this business. If you go to a promoter they will ask who trained you. If it’s Joe Blow they will probably send you out, but if Booker T or Stevie Ray trained you it will get a lot more respect and they will look at you differently. I’ve been in this business for fifteen years and my respect is my word for what I have given to other people and what I expect to get back.”

Before he steps out of the spotlight to focus on his students, Booker has a few more plans inside the squared circle including gunning for a final run at World Champion, and re-igniting his most famous feud.

“We just had a big addition to Smackdown! with Chris Benoit coming over. Everyone knows our history and wants to see a best of seven series one more time. I came out on top the first time, but years later it would be interesting to see how it goes now,” he concluded.