Back in 1971, with two kids of her own at home, Rose Skinner started tagging along with her friend Shirley Moore to the wrestling matches. Moore was dating a wrestler named Cecil DeBrune, one of the Masked Maulers around southern Ontario. Soon, they were both hooked and began training.

“We used to go over to Dave [McKigney’s], and we used to watch them wrestle,” Skinner told SLAM! Wrestling. “Shirley and I thought it was interesting, so we got him to show us how to do some moves and whatever. We just got into it. Whipper Billy Watson, he used to help us. Sweet Daddy Siki, we had a few bouts with him.” 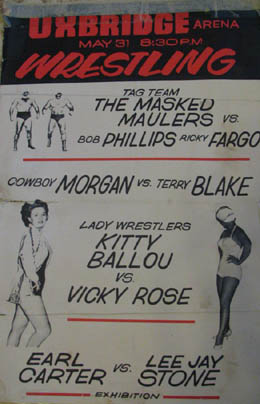 Living in Keswick, Ontario, the Newfoundland-born Skinner was a waitress, which allowed the flexibility to head down to Aurora to work out with the Bearman-and his bear. “[McKigney] was a great guy, and so was the bear. It was a very friendly thing. We would play with it. It used to get in the ring with Shirley and I, and just fool around.”

Her first bout was in Uxbridge, Ontario at the Uxbridge Arena on May 31, 1971. Also on the show: The Masked Maulers (Cecil & Dave DeBrune) vs Bob Phillips & Ricky Fargo, Cowboy Morgan vs Terry Blake, and Earl Carter vs Lee Jay Stone. “My girlfriend Shirley had a bout and she asked me to come along. I said sure. Well, a couple of days before she was about to wrestle, a girl she was supposed to wrestle from Niagara Falls didn’t show up. Shirley and I practiced our moves, we’d been practicing for about six months. We did it together, that’s how we started.”

Skinner took the name Vicky Rose from her CB radio handle, Rusty Rose. She never topped 100 pounds as a wrestler, while her frequent opponent Kat Ballou (her friend Shirley Moore) outweighed her at 125 pounds or so. “I never really put on the weight, but I was very agile,” said Skinner.

In 1974, Skinner realized she was pregnant again with her third (and last) daughter. That was the end of her wrestling career. “But I’d still go, I’d still follow along. I enjoyed the wrestling bouts and matches,” she said, adding that the unique culture was like “race cars, going to the race tracks, I get excited. It’s the same with wrestling. Some things you take an interest in and they don’t last long. I can still sit down with anybody and still watch wrestling.”

She regrets getting into the game late, and wishes she’d done more than just wrestle around southern Ontario, like go on one of the Bearman’s tours of northern Ontario or the Maritimes. “I really wish I could have continued, because I’m sure I could have done something with it.”

Instead, Skinner continued to raise her three daughters while working as a waitress, bouncing between living north of Toronto to Edmonton. Today, she still lives in the Alberta capital, and was “the chief cook and bottlewasher” at the hopping Sixth Street Bar from 1985 to 1996.

Having just turned 60, Skinner is pleased that her three daughters and her six granddaughters and one grandson all live near Edmonton. She has a couple of prizes from her short stint as a pro wrestler: the poster from her first match (shown above) and a pair of wrestling boots.