Being a Valiant wasn’t easy

CARTERET, NJ – Oh, the perils of Valiant-hood. If your name was Jimmy, Johnny or Jerry Valiant in the 1970s, you were well advised to tread carefully in public.

You had to pick your choice of eateries carefully. You had to rush through a bowling alley at Madison Square Garden, so you could catch the first ambulance out of the arena, away from the throngs that loathed you. You replaced your tires because angry fans slashed them, not because of worn treads.

“You go back to when we were around here 25 years ago; it was not just running for your life. You had to watch where you ate,” said Jerry Valiant, as he mimicked a chef who once spotted the strutting heels and spit in their food to “give them a little extra sauce. It happened, so you avoided open kitchens where they could see you.”

It’s hard to imagine, then, that the hated Valiants would be greeted like conquering heroes 25 years after they ducked for cover on a nightly basis.

But that was the reaction as the trio reunited last Saturday for the first time in a quarter-century at a fan festival organized by Wrestling Then and Now and In Person Entertainment.

“People still, wherever I go, they talk about the Valiant Brothers, and that was five years out of my career,” said Jimmy Valiant, who hung up his boots earlier this year after 40 years in the mat game. “So that was hot, and something that was on people’s minds.”

While Jimmy and Johnny have appeared together on several occasions in recent years, most notably their 1996 induction into the WWE Hall of Fame, the fanfest marked the first appearance of Jerry, otherwise known as John Hill, currently of Indianapolis, but originally from Hamilton, Ontario.

“I could sit here till midnight talking to these guys,” said Jerry, a tag specialist who had a strong run as a Valiant in the Central States territory in the early 1980s.

Also on hand at the convention was Nikolai Volkoff, a member of the WWE Hall of Fame class of 2005. Volkoff, 55, who still frequents the independent circuits, convulsed fans with roads tales of the Iron Sheik and his use of mood-altering substances.

Still, the focus was on the loud, obnoxious, bleached-blond Valiants. The team ruled the tag team roost in the WWWF on and off from 1974 to 1979. “They got to where they are because they gave more,” said Lanny Poffo, who hosted a lively question-and-answer session with the make-believe brothers.

The Valiants first hooked up in Indianapolis when Jimmy was looking for someone to replace Bobby Heenan, his manager. Jimmy and Heenan settled on a powerfully built grappler from Pittsburgh named John L. (Tom) Sullivan.

Sullivan recalled that he took a quick look at Jimmy, who kept on the interior lights in his Ford Thunderbird so he could reflect on himself in the rear-view mirror. “I said, ‘This is going to be interesting.'” 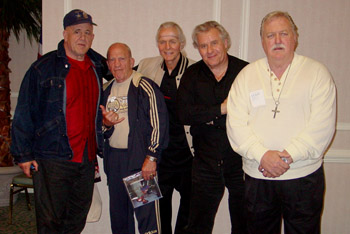 “Handsome” Jimmy and “Luscious” Johnny were WWWF tag champions in 1974-1975, and headlined in places like Georgia and San Francisco, as well. When Jimmy contracted hepatitis during a second run in the Northeast, Johnny brought in “Gentleman” Jerry, who had wrestled as The Stomper, among other aliases, to earn tag team gold in 1979.

Jimmy recovered sufficiently to wrestle in six-man matches, though keeping everyone on the same page was sometimes challenging, Johnny said.

“I was in the ring. Jimmy could have been in the ring, as well. And here’s Jerry Valiant. He’s leaning over the ropes. The crowd, they’re responding to us villains being in the ring,” Johnny remembered.

“Jerry is leaning on the top rope, like he’s waiting for a bus. And he’s kind of looking around at all the lights overhead and he’s panning back and forth. He leans over to me and he says to me, ‘You know, I was talking to the head of maintenance before the matches. Do you realize what the electric bill is for the arena? You have no idea as to the wattage of these new bulbs!'”

While that diversion might have been amusing, the Valiants drew so much heat from audiences up and down the East Coast against the likes of Bruno Sammartino and Chief Jay Strongbow that they experienced more than a few anxious moments.

And the fact that the Valiants were WWWF tag team champions and main event performers exacerbated the problem. Their matches often were the final ones on a card, so they couldn’t hustle out of the arena when fans were engrossed in other contests.

“That’s the kiss of death when you’re tag team champions or a six-man tag team. They put you on last. Don’t plan on going nowhere, man,” said Johnny, now known for his recurring tough-guy role on The Sopranos.

In the Boston Garden, arena attendants regularly left the glass from hockey games intact and often covered the ring area with a net. “Johnny and I and Jerry, we get out there and we look up because we’re on there later. In the net, we see these bulbs and knifes that they threw,” Jimmy said.

And apples, Jerry added with a touch of wonder in his voice. “Boston had a vending machine that sold apples,” he said. “Why would you sell apples? It got bad.”

Even worse, though, was the time that the wrestlers spent away from the families. Johnny was visibly choked up as he talked about the personal sacrifice involved in being a wrestler, and Jerry revealed that he intentionally kept his family in Indianapolis, so that wouldn’t be ensnared in the fallout from his career.

But all was forgiven 25 years later, as the Valiants sat down to a prime rib lunch with many of their fans. And what tribute to the team would be complete without a poem offered by master rhymer Poffo:

Look back through the annals of history
And the wrestling hall of fame
Men from all nations with courage to spare
Who struggled to carve out a name
Now we have come to New Jersey
And the Valiant Brothers are here
For handshakes, pictures and autographs
And hopefully buy them a beer
Because for the price of admission
They always gave more than they took
They always went over in two straight falls
And I don’t care who had the book.

“It’s an amazing, amazing world. I’m glad we all survived and got here today,” Jerry said.