Malia Hosaka used to think wrestling was the stupidest thing on television. 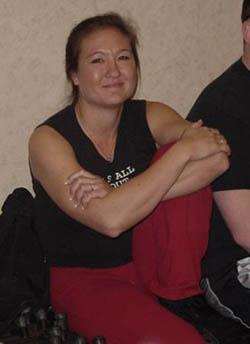 She would watch it every Saturday with her dad. After viewing, what she has referred to as a “goofy” match between The Missing Link and Bugsy MacGraw, Hosaka told her father that anyone could wrestle. In her mind, it required no real athletic ability.

Her father dared her to give it a try.

Fast forward 18 years later, not only has Hosaka changed her mind, but she’s still wrestling.

Originally from Honolulu, Hawaii, Hosaka began her journey through the ropes by moving to New York in 1987 and getting trained by none other than Walter “Killer” Kowalski at Misty Blue’s Camp. She then moved to Florida and began her wrestling career, an odyssey that has taken her all over the world, through the independent circuit and even given her a taste working with two of the biggest promotions the business has to offer.

From 1995-1998, she was with WCW, not under contract but on a nightly basis. During this time, Hosaka helped a newcomer get her start with WCW, someone who would later be known as former WWE Women’s Champion, Molly Holly.

In 1999, Vince McMahon signed Hosaka to a developmental deal. She was released in 2000 due to lack of character development.

“Basically I got paid to stay home,” revealed Hosaka in an interview from this year’s Cauliflower Alley Club reunion (CAC) where Hosaka, a first-time visitor to the reunion, was found signing autographs next to Paul Christy & Bunny Love. Standing at 5’3″ and weighing in at 130 pounds, she is dressed simply in a t-shirt and jeans and flashing a radiant smile to all her fans, who she is first to credit for her longevity. Despite showing the pain of pulled muscle, she is eager to talk.

“I was supposed to be Aphrodisia and manage Papi Chulo, but they decided that Lita looked better for the look,” she continued. “I was a little disappointed, but I had hope that they would go ahead and use me in another aspect.”

Hosaka feels that politics came into play because the people that hired her left the WWE soon after she signed her contract.

Today she is still active on the independent circuit and takes pride wrestling overseas for military troops. While she hasn’t been to Iraq, she has ventured to locales including Afghanistan, Kuwait, Turkey and Egypt.

“It’s awesome,” she said enthusiastically. “I would rather go get injured for 15 fans who actually appreciate what I am doing for them then in front of 50,000 fans who will forget me tomorrow.”

She added, “It is an unfortunate event that people get hurt, but it does seem like when you are off TV with Vince [McMahon], his fans seem to forget you and I don’t think that’s right because we abuse our bodies for a living to entertain them.”

Despite her negative experience with the WWE, she wouldn’t rule out working with them again.

“Would I go to Vince?” she pondered. “Yes. Under the right circumstances I would accept a contract from him. Am I actively pursuing it? No. I am very happy at this point in my career, where I am at and what I have done.”

What Hosaka would never do is compromise her beliefs for a job. She is extremely outspoken about the vast changes of the role of women in the sport. Not only in person, but also on her website.

“It used to be a stereotype that pretty girls couldn’t wrestle and girls that could wrestle weren’t pretty,” she declared firmly. “Unfortunately, I think the stereotype has been perpetuated that you don’t even have to know how to wrestle if you look good. I would like to see the girls of the independent circuit band together and be able to form their own company and get promoted as athletes because we deserve it.

“We work hard and we deserve to be in that ring. The one that are out there just to go to Vince and be eye candy, I wish they would just get out of the ring because they are disgracing the business and taking away from the art. And they are making it much tougher for women to be taken legitimately in a male dominated sport.”

As for the aspiring female wrestlers, including those who participated in the CAC wrestling seminar, Hosaka has some honest advice.

“Work hard,” she said sternly. “Be prepared for heartache and under no circumstance compromise their morals for just a job. You gotta be able to look at yourself in the mirror in the morning. It’s more important to stay true to yourself than to keep a paycheck.”